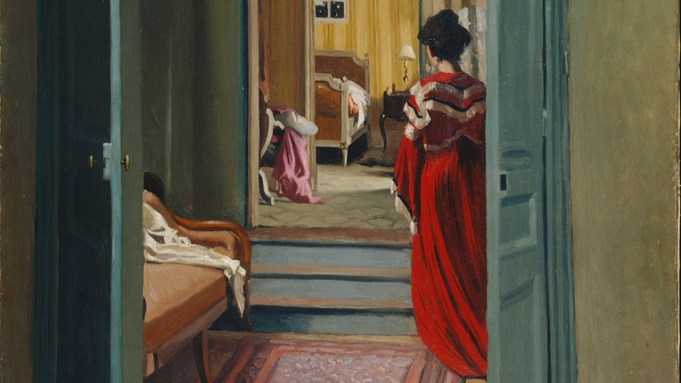 The bourgeoisie: now there’s a subject for a nineteenth-century artist. In little more than a century, this newish class had gone from being comedic fast-talking Figaros to planet-altering overlords striding across the globe in search of a soul, status, and an appropriate self-image. What, aside from double-entry bookkeeping, lurked in the heart of the bourgeoisie, and how to represent its likeness?

Enter Félix Vallotton, striver son in a Swiss bourgeois family who came to Paris in 1882 and enrolled at the Académie Julian, a freewheeling alternative to the École des Beaux-Arts. He soon fell in with the Nabis (Hebrew for “prophets”), a group united in their esteem for Gauguin and Cézanne that included Bonnard and Vuillard. They preached spiritual renewal and, more productively, a jettisoning of the canvas’s illusionistic space in favor of stylization, lurid color, and an overt use of ornament. Bonnard and Vuillard took this approach indoors, turning bourgeois interiors into hallucinatory scenes.

For Ernst Ludwig Kirchner, Painting Was a Site of Restorative Exuberance and Anxious Estrangement

As demonstrated by the paintings in the Metropolitan Museum of Art’s retrospective of Vallotton’s work, “Painter of Disquiet,” the artist was a fine colorist, on par with his better-known peers. Yet his signature contributions to modern art eschewed the riotous chromatic wallpaper of Bonnard and Vuillard—and even color in general. The artist’s great achievement was to revive woodcut printing in Europe. If it hadn’t been Vallotton, someone else would have done it, with half of Paris high on ukiyo-e woodcuts ever since Japan had been forcibly opened for commerce in the 1850s. But we’re lucky it was Vallotton, whose stark black-and-white prints, produced using matrices of soft pearwood, provide a singularly critical look at both private and public life.

Few artists have made the dark heart of the bourgeoisie more visually interesting, and none with such perfect economy of means. Vallotton cast his gaze into private apartments, where the clocks seemed stuck in le cinq à sept, adulterous witching hours. His greatest single work is the woodcut series “Intimités” (Intimacies, 1897–98), published in La Revue blanche, the flagship little magazine of Parisian decadence. The standout print is L’Argent (Money, 1898), whose leftmost edge displays a louche canoodling couple, while the right two-thirds of the composition is an immaculate expanse of thick, fudgy noir.

The exhibition includes a few of Vallotton’s preparatory gray-shaded ink-wash sketches alongside the prints, showing how much he gained by losing tonal value gradations in favor of flat white and black—especially the black whose vast joined allotments suggest so much obscured detail, much of it no doubt illicit. Within these self-imposed limits Vallotton produced an astonishing variety of atmospheric effects, from fireside heat and light to greenhouse humidity in one 1896 series on domestic music-making.

Equally striking are Vallotton’s crowdscapes and city scenes—an execution, a traffic accident, a sudden downpour, faces in a darkened theater—which, like Weegee’s snapshots of working-class urban life, brim as much with eerie weirdness as with conscientious reportage, the teeming people showing more mask than face.

These graphic works were immensely popular, not just in Paris’s thriving radical print media but in the Anglosphere from London to Chicago, where a couple of Harvard guys ran the Francophile magazine The Chap-Book, which published Mallarmé poems even before its Parisian counterparts. Vallotton’s woodcuts are reproduced in the New York Review of Books today, proof of both the abiding freshness of his designs and the enduring appeal of fin-de-siècle Paris as a mythical homeland for intellectuals. Vallotton’s graphic works anticipated the incriminating tenebrism of cinematographers like John Alton and Gabriel Figueroa, who lensed the world and its surfaces, from velvety divans to hard asphalt, as one big crime scene.

This depiction of outwardly respectable bourgeoisie as secretly scandalous rewarded all parties, throwing a bone to socialists and moralists while tickling the self-regard of a social class long anxious about being too staid, too dull. And the nineteenth-century bourgeoisie, it turned out, had a healthy appetite for introspection and self-criticism. (Ibsen did not starve.)

Vallotton’s radicalism almost made it to the end of the century. In 1899 he married a wealthy widow, Gabrielle Rodrigues-Henriques, a move that was good for business—her family connections guaranteed him steady gallery representation—and that provided a free source of domestic alienation for his art. That same year, he painted Le Dîner, effet de lamp (Dinner by Lamplight), a dinner table nightmare in which his new stepdaughter stares out at him from Stygian darkness while his stepson yawns. His Intérieur avec femme en rouge de dos (Interior with Woman in Red Seen from Behind, 1903), a view through three doorways in a bourgeois dwelling, with a woman in a nightgown standing in the middle of the scene, conveys emptiness and a sense of the uncanny amid quietly sober brushwork, a mood later distilled to higher proof by Magritte.

Vallotton did make more than bourgeoisie genre scenes. He painted nudes, whose generally frigid and listless flesh prefigured Weimar Germany’s Neue Sachlichkeit. More appealing are his paysages composés, shimmery coastal and riverine landscapes synthesized in the studio from sketches and snaps from the artist’s beloved Kodak; the technique was a retreat from the plein-air honesty of the Impressionists and, despite the daring Japanese-inflected formalism of his waves and moonrises, a throwback to more traditional landscape works, with their heavy cargo of symbol and portent.

Vallotton grew old enough to glower at the next wave of ambitious avant-gardists rolling into Paris. Picasso made his great portrait of Gertrude Stein resembling a neo-primitive terra-cotta vessel in 1906, and the following year, the Swiss artist painted her as a direct descendent of Ingres’s iconic bourgeois M. Bertin, with the same mass, cold dignity, and restless, sausage-y digits. The Met, in a curatorial coup, hung the two Gertrudes side by side in uneasy company. It must be said, though, that Picasso’s modernist portrait is not much touched by Vallotton’s traditionalist retort.

After European leaders started their Great War, Vallotton, like other formerly radical painters, ranging from George Bellows to Ernst Ludwig Kirchner, caught war fever, hiring himself out to his adopted homeland to make prints depicting the Western Front, unedifying little images lacking bite and aesthetic charge. It is a mercy that the Met’s presentation does not include these woodcuts, which were featured in the show’s first incarnation, at the Royal Academy in London.

Vallotton died in 1925, leaving behind an exemplary body of work. Unlike Bonnard, he never got his own volume in the Thames & Hudson “World of Art” series, his painterly talent too various, his output irreducible to a single stylistic brand. (Vallotton also wrote plays and novels. His posthumously published, campily doom-laden novel La Vie meurtrière [The Murderous Life] is still in print.) One can easily imagine the Calvinist elders of Vallotton’s native Lausanne looking with approval at his moralizing, his eventual complaisance, and the stark astringency of his images.