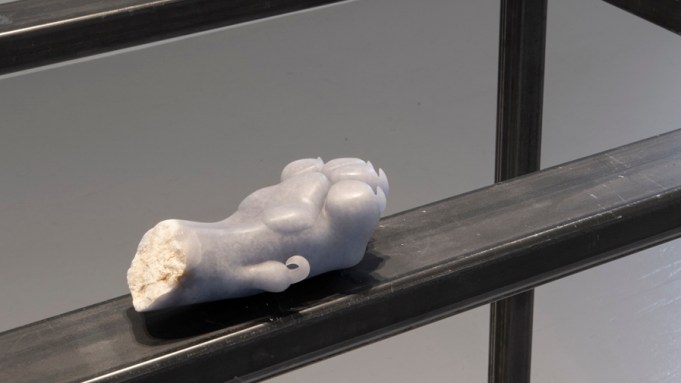 What can the color blue tell us about masculinity? Fin Simonetti’s recent exhibition, “Pledge,” centered on a series of small sculptures carved from blue alabaster and placed theatrically on a thin steel railing that zigzagged through the gallery. The objects served as a suite of oblique monuments to our current cultural reckoning with hegemonic masculinity: oppressive because of its fragility. Although seeming as solid as Classical marble sculptures, the objects were actually made of a soft mineral. Although bolted to the railing, they appeared precariously balanced.

The first sculpture in the progression was a rendering of a fire extinguisher, hinting at a state of emergency. Next, an alabaster cock and balls suggested the castrated remains of Western art’s heroic nude. A candle with a cartoonish flame drove home the fact that, no matter the tools at our disposal, the world is a dark place to navigate. Two paws and a tail modeled on those of a pit bull mastiff—and placed on a rectangular portion of the railing that registered as the ghostly scaffolding of the animal’s body—evoked a type of dog commonly considered aggressive. After this came a pair of alabaster earplugs: perhaps for men to block out opinions that might contradict their own.

Crucial to the concept of fragile masculinity is that rage and abuse are often the result of a brokenness, a sadness that men can’t (or refuse to) process and share. Simonetti, who started sculpting stone after her father’s death in 2017, created an atmosphere that was partly grievous. Blue, however, conjures not only sorrow but a tremendous assortment of interior states and natural phenomena—far more, it seems, than any other color. William H. Gass, in his book-length essay On Being Blue (1975), wrote: “So blue, the word and the condition, the color and the act, contrive to contain one another, as if the bottle of the genii were its belly, the lamp’s breath the smoke of the wraith.” The blues in Simonetti’s works, which are grayish with tinges of violet, produced a kind of magical visual effect: blues started to appear in the black railing and the white walls. One thought of the blues of bruises, fog, and semen. Calm blue skies. Fire, too.

On the walls hung two framed works, Cathedral I and Cathedral 2 (both 2019), in which faded barbershop posters showing men what options they have, from buzz cuts to fades, were placed behind stained-glass panels. Small glass pieces highlighting the men’s ears seemed to advise us that, in order to access the sweep of meaning to which the exhibition alluded, listening was required.

Leica Just Resurrected Its Legendary M6 Camera. Here’s Every Step It Takes to Make It.

She Spent Two Years Writing for an Acclaimed Album — and Made Only $4,000

Reviewed: Musely’s FaceRx is the Digital Alternative to Going to a Dermatologist