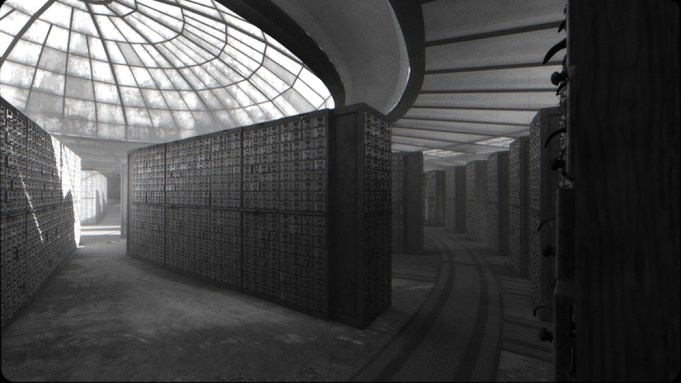 Indonesia-born, Amsterdam-based artist Fiona Tan began her career in the 1990s, when digital technologies began transforming—or bastardizing, depending on whom you ask—the mediums she took up: film, video, and photography. At first glance, I thought her exhibition at Peter Freeman, “Archive/Ruins,” was a strictly analog affair that reveled in nostalgia for a bygone world. Projected on a wall in the main space, the grainy, six-minute black-and-white video Archive (2019) depicted the interior of a vast, abandoned building filled with towering rows of card catalogues. The projection’s rounded rectangular shape, evoking frames on celluloid, suggested that the work was a digitized film—the print too fragile and technically cumbersome to be shown on a loop in a gallery. Six gorgeous photogravures of stills from the video hung nearby, reinforcing the old-fashioned feel.

It turned out, however, that Archive originated not on film but on the computer. The video is a CGI reimagining of a historical institution in Belgium, the Mundaneum. Founded in 1910 as the Palais Mondial (World Palace) and renamed in 1924, the Mundaneum was the brainchild of lawyers Paul Otlet and Henri La Fontaine—the former considered the father of information science, and the latter a Nobel Peace Prize laureate for his work heading the International Peace Bureau—and was devoted to cataloguing all published human knowledge as a step on the path to world peace. Archive is neither a post-internet project nor a product of archive fever, but a refreshing look at continuities and disjunctions between media old and new. For instance, in 2012, the Mundaneum, which has been a museum since 1998, embarked on a partnership with Google, whose search engine can be considered a digital descendant of Otlet and La Fontaine’s paper project but whose work hardly aligns with world peace efforts.

On headphones in the same gallery played the sixteen-minute sound piece Hydriotaphia (2016), in which a man with an Irish accent reads an excerpt from a 1658 book of the same title by Thomas Browne, stating that “time, which antiquates antiquities, . . . hath an art to make dust of all things” but that “the long habit of living indisposeth us for dying.” In the next room, the two channels of a work called Ruins (2020) were projected on opposing walls: one channel is 16 mm film; the other, high-definition digital video. It was difficult to see both at the same time, which worked to mask the stark differences between them and thwarted simplistic comparisons (though the film was more attractive). Ruins portrays a disused mining complex in Belgium, now a monument to a lost civilization and way of life and here a stand-in not only for mortality but also for the slowly decaying art of film. Tan’s depiction reads as tranquil and reverent, though: not a tragic lamentation, but a gesture of acceptance. There is comfort and even relief, she suggests, in being but a speck of something larger. “In vain do individuals hope for immortality,” says Browne, “or any patent from oblivion.”