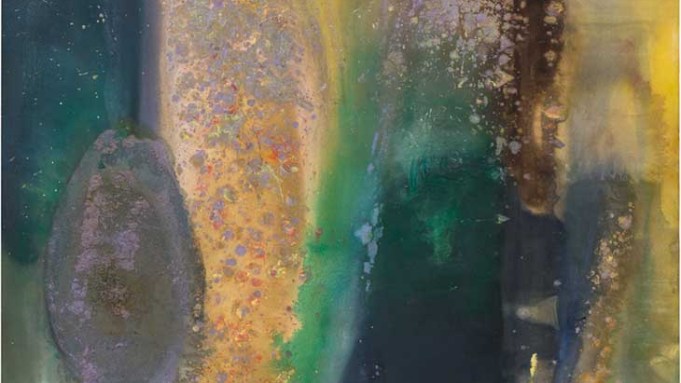 Frank Bowling’s exhibition at Tate Britain wasn’t just a retrospective. It was also an argument for Bowling’s canonical status, an effort to usher the Guyana-born painter into the cast of late-modernist greats. Certainly, this ambition is implicit in Bowling’s practice itself, at least if the early pieces on display are anything to go by. He made these works between 1962—the year he graduated from the Royal College of Art in London (he had moved to the city in 1953, at age nineteen)—and 1966. Birthday (1962) is almost ludicrously Francis Bacon–esque, with its gnarled corporeal form and use of linear framing structures within the composition. Other early works continue in the overtly expressive direction but mix in references to such titans of geometric art as Mondrian and Kenneth Noland. The apogee of this omnivorous, syncretic phase was the virtuosic Mirror (1964–66), a stylistic medley of Pop-y, patterned interior spaces featuring a twisting golden staircase occupied by smeary, blurry figures.

The subsequent pieces, though, were the highlight of the chronological show. In 1966 Bowling moved to New York, where he lived for the next decade, and it was there that he produced his “Map Paintings” (1967–71)—colossal canvases on which bits of cartographic outlines swim in sizzling, shimmering washes of color. They’re complex, contradictory works that paralleled Bowling’s writing, in publications such as Arts Magazine, in favor of a black aesthetic that departed from a reliance on representational imagery. While the paintings invoke a set of geographical locations that carry personal or political resonances for Bowling—Europe, the Americas, Africa—they also destabilize such specifics, the map forms dissolving or repeating, drifting into abstraction. Conversely, the fields of color, which generally suggest a purely expressive mode, occasionally convey figurative or symbolic connotations, as in the pan-Africanist green, yellow, and red striping of Who’s Afraid of Barney Newman? (1968). Bowling’s aim throughout the series, then, was to develop an artistic language that was both descriptive and formalist, that seemed to invite narrative as well as reject it. Middle Passage (1970) combines cartographic snippets of Africa and silk-screened images of figures from Bowling’s hometown, but it also displays a fiery fog of yellows and reds that threatens to subsume the imagery. The title thus seems to refer not only to the slave trade but also to the techniques and formal aspects of applying paint.

The show’s remaining rooms featured works in which Bowling eschewed these sorts of tensions in favor of a more straightforwardly formalist approach. His “Poured Paintings” from the ’70s, resembling waterfalls of bright, marbled colors, were championed by Clement Greenberg. And in the subsequent two decades, after he returned to London, his experimentation with substances like pearl essence and ammonia and with found materials embedded in thick layers of gel resulted in gooey, nacreous, madly detailed compositions that can be quite striking. Still, there was something slightly off-putting about the sheer proficiency of it all, the triumphant procession of these gargantuan, delirious conflagrations of form, color, and texture. If you were at all resistant to the heroic trajectory of modernism, that sense of painting as a sort of masculine, magisterial struggle with the elements, then much of the show’s second half inevitably felt like a bit of a slog. It was only with the most recent pieces, displayed in the final room, that his work seemed to become more playful, more productively ambiguous and contrarian, with discordant nuggets of geometric pattern once again allowed to peek through the slathers and skeins of paint.

This article appears under the title “Frank Bowling” in the October 2019 issue, p. 95.

The Pandemic Caused NYC’s Wealthy to Leave in Unprecedented Numbers

Ukrainian Designers Carry On Despite the Russian Invasion

Price Drop: The Vitamix Blender With a Cult Following Is 36% Off