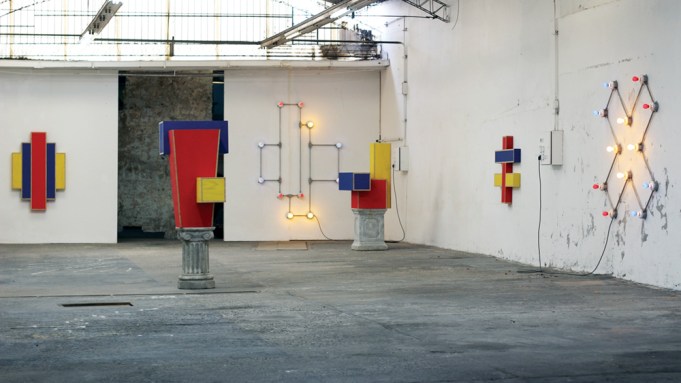 During World War II, Hedy Lamarr, the famous Vienna-born Hollywood actress and inventor, collaborated with composer George Antheil, best known for his avant-garde Ballet Mécanique (1923–25), to develop a unique system that would make jamming the radio-guided operations of torpedoes more difficult. Intended to bolster the Allies’ war effort, this system involved rapidly moving the signals among frequencies in a process known as “frequency hopping.” The United States Navy eventually experimented with the method, in the 1960s, and Lamarr and Antheil’s ideas partially inspired the development of Bluetooth and Wi-Fi technologies.

This unlikely narrative, in which histories of art and technology intersect, served as a departure point for “Salto de Frecuencia” (Frequency Hopping), a striking and disarmingly low-tech exhibition of sculptures, paintings, and light installations by G.T. Pellizzi. Born Giandomenico Tonatiuh Pellizzi in 1978, in the rural town of Tlayacapan, Mexico, Pellizzi studied architecture at Cooper Union in New York, and cofounded the Bruce High Quality Foundation, a collective known for historically astute, if prankish, art world antics. Exhibiting as a solo artist since 2011, the peripatetic Pellizzi, who divides his time primarily between Peru, Mexico, and the United States, created the works for the show during an extended stay in Buenos Aires this year.

The thirteen pieces on view, which comprise a series that shares the exhibition’s title, employ a palette of red, yellow, and blue. Austere and elegant, seven oil paintings on nearly eight-inch-deep plywood supports evoke compositional tropes associated with the historical avant-garde. These paintings, which could also be described as low relief sculptures, given the irregular forms of the support structures, seem to be constructed of intersecting monochromatic rectangular boxes in the primary colors. In Figure #18, for instance, a vertical red rectangular bar roughly forty inches tall and some eight inches wide seems to be crossed near its top by a horizontal blue bar of the same dimensions while itself crossing over a horizontal yellow one below. The rigorous design and primary color scheme of these works call to mind Mondrian’s classic abstractions, and, more broadly, the modernist milieu of the 1920s and ’30s, when Lamarr rose to fame and Antheil produced his major works.

Lamarr and Antheil modeled their frequency-switching device on the perforated rolls used in player pianos to produce sequences of musical notes. Pellizzi’s forms echo the rectangular shapes of those perforations. In a press statement, he notes that the overlapping planes in the works can imply a time sequence, as a shape “on top” can be seen as coming “before” or “after” another. Indeed, Pellizzi’s wooden constructions, despite their bulk, appear visually dynamic.

Three large-scale wall-mounted light pieces consist of rectangular configurations of steel tubes encasing electric wires. Light bulbs—red, yellow, or blue—are situated at the corners of the rectangles. These works pay homage to Latin American constructivism, and specifically to Arte Concreto-Invención, a pivotal mid-twentieth-century Argentine cultural movement led by Julio Le Parc and Tomás Maldonado. Arte Concreto-Invención artists employed hard-edge abstraction in their paintings and disorienting lights and kinetic elements in their sculptures as aesthetic means of protesting the propagandistic realism then associated with an oppressive government.

Perhaps the most remarkable works in the show were two freestanding sculptures, Figure #22 and Figure #23. Both feature wood constructions of three interconnected plywood boxes painted the primary colors. The constructions rest on found antique stone plinths: a squat Ionic-style column in the first instance, and a square neoclassical one in the second. The artist notes that the plinths refer to the grandiose nineteenth-century architecture of Buenos Aires. In these commanding works, forms associated with the austerity and rigor of the avant-garde meet the ornamentation of urban life. If the story of Lamarr and Antheil is an improbable intermingling of histories, then Pellizi’s exhibition suggests the rich and sometimes unpredictable associations that can be made with seemingly simple geometries and basic colors.