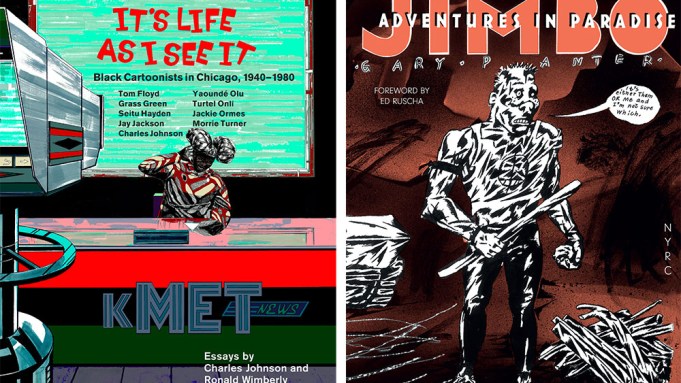 Being in a cartoon is a lot like being in hell. No matter how often Daffy Duck gets shot in the face, the animators bless him with a full recovery, so that he can get back to being tortured as soon as possible. Daffy isn’t so different from the sinners in Dante’s Inferno, perpetually drowned in shit or roasted or boiled, or Lucifer in Book I of Milton’s Paradise Lost, chained in fire. I am not the first to notice this: The Daffy-Lucifer connection inspired John Ashbery to write his poem “Daffy Duck in Hollywood” (1975), and John Berger based one of his finest essays on the secret kinship of Walt Disney and Francis Bacon. Of course, being in a cartoon looks more fun than being trapped in a glass cage or a fiery lake, but, as Milton’s Lucifer knew, agony can be fun, too.

The cartoonist Gary Panter knows his Milton, and his Dante, and his Looney Tunes, and his Disney, and like Ashbery he knows how to whisk them together into one sweet-and-sour dish. Taken one at a time, his drawings have the hasty, half-assed crudeness of middle school textbook marginalia. In aggregate they become as dark and dense as a Chaim Soutine beef carcass. Few characters die in his debut comic book, first published in 1988 and newly reissued by New York Review Comics, but they put up with gunfire, stabs, melted faces, electrocution, an army of giant cockroaches, and a nuclear blast. The collection plausibly could have been called Life in Hell if Panter’s close friend Matt Groening hadn’t already used that title for his own comic strip. Instead it’s called Jimbo: Adventures in Paradise.

Who is Jimbo? “Punk everyman” is the usual description; another might be “Bart Simpson, if he’d aged along with his TV show while huffing glue and working out twice a day.” Jimbo has Dwayne Johnson’s body and Bart’s haircut (or rather, Bart has Jimbo’s; Groening drew the character in homage to Panter—even now someone’s probably banging out a dissertation on other links between the “Simpsons” and Jimbo universes). He also looks great in a kilt. He’s been a regular in Panter’s drawings since the 1970s, when the artist arrived in Los Angeles and began developing what he’s described as his aesthetic of “rambling coherence.” Jimbo is the coherent part, the hero whose jaunty, unkillable sameness guides us through the chaos of everything else.

When I say everything else, I mean everything else. Adventures in Paradise has a plot, but only in the sense that Burroughs’s Naked Lunch or Ballard’s The Atrocity Exhibition have plots—better to say it has needle skips, lurches, cutaways that never cut back. At the beginning of the book, Jimbo is in the Martian metropolis of Dal-Tokyo—think of the real Tokyo, then add robots and spray everything with gunk—but it’s hard to tell if he remains there. He climbs down a sewer, discovers an underground club, takes a pill, and wakes up in bed some time later. Is he still on Mars? Was he ever? By page twenty, we might as well be in Durant, Oklahoma, where Panter was born, or Bosch’s Garden of Earthly Delights, where I suspect Panter would like to go when he dies. Jimbo visits a fast-food restaurant that reads his mind (saves you the stress of choosing); later, he’s arrested for being too poor to buy the fast food he never actually ordered. He flees civilization to live in a wigwam and play noble savage, but by the book’s end, the Bomb has gone off and there’s no civilization left to flee.

Is this paradise? The easy answer is no, of course not, Panter’s kidding—then again, kidding lets you get away with telling the truth. The heavy-metal-Inferno on the right-hand side of Bosch’s triptych has always delighted me more than the Muzak Eden on the left, and I would guess Panter (not to mention Bosch) feels the same way. His Dal Tokyo may be hectic and gross, but it’s also lively and comic and kinetic and crawling with ideas. Like the director Terry Gilliam, whose film Brazil was released a few years before Adventures in Paradise, Panter wears allusion on his sleeve, so that even at their gloomiest, his creations throb with the joy of their influences. The mind-reading burger joint would make Philip K. Dick proud, the quasi-connected vignette structure is pure Burroughs, the furious clutter and cross-hatching owe a student loan–sized debt to Robert Crumb and the San Francisco underground. Paradoxically, the result of all this borrowing is a true original—a reminder, too, that late twentieth-century American culture was so rich even its dystopian nightmares were feasts.

It’s terrifying how optimistic that era’s pessimism now seems. In Adventures in Paradise’s view of the future, we’re all fucked, to be sure, but at least we get to go to Mars, hang out with sentient robots, expand, accelerate, etc. The last four decades seems to have brought something like a great lowering of expectations, which David Graeber described like so: “A timid, bureaucratic spirit suffuses every aspect of cultural life. It comes festooned in a language of creativity, initiative, and entrepreneurialism. But the language is meaningless. . . . The greatest and most powerful nation that has ever existed has spent the last decades telling its citizens they can no longer contemplate fantastic collective enterprises.” Graeber singled out scientists and politicians for their contracting imaginations, but the creative class isn’t exempt— just look at the extraordinary success of Marvel Studios, the company whose fizzling pyrotechnics and brand-management-disguised-as-entertainment are a shadow of the American comic-book tradition to which Gary Panter has added so much.

Before comic books stiffened into graphic novels and graphic novels swelled into superhero movies and superhero movies became plain old movies, there was the Defender. Founded in 1905, the Chicago Defender was one of the country’s leading Black newspapers for over a century, until it went online-only in 2019. If you were a Black cartoonist living in the Midwest, it was the place you wanted to be published, at first because it was one of the few places that did publish Black comics and later because it was the most prestigious. Now that all comics, not just Black-authored ones, are going the way of the dodo, the DVD, and the Defender’s print edition, we at least have some handsome anthologies to look forward to.

Cartoons from the Defender form the backbone of It’s Life As I See It: Black Cartoonists in Chicago, 1940–1980, another essential volume from New York Review Comics. The title is taken from the caption of a 1970 single-panel by Charles Johnson, the closest thing to a household name in the world of Black cartooning, even if his fame has more to do with his 1990 novel Middle Passage and his MacArthur Fellowship than with his art. The panel in question shows a white art critic, a Black painter with a big Afro, and his latest painting, which is completely, stubbornly, unapologetically black. Another cartoon from the same year has a Klansman saying his nightly prayers: “Give me the strength to eliminate the inferior people ruining my nation.” The Klansman gets an immortal reply from the heavens—“Sho ‘nuff boss!”—for which they should have given Johnson his Genius Grant then and there.

Artists of a belittled race, practicing a belittled art form, living in a belittled city (third is a long, long way from first or second)—small wonder that belittlement is a near-constant theme of this book. Tom Floyd’s series Integration Is a Bitch!, from 1969, is a splendid fish-out-of-water comedy, about a Black employee and his new, white(-collar) office. Everyone’s a little too delighted to have him there—the secretary burbles about the “nice colored man” who cuts her grass, the president sports a kufi, and so on. Later, the Black employee gets his revenge by applauding, in a movie theater packed with white people, at a scene where an African tribesman ties an explorer to a tree.

Defining a Black cartoon aesthetic is a mug’s game, for which the exceptions necessarily outnumber the examples. (As if to underscore the point, this book’s title is an unreliable predictor of its contents; several comics were drawn after 1980, and one was drawn in 1990). All the same, every publication has a house style. The early Mad magazine staffers, nearly all of them big-city Jews, pioneered a dense, dirty, detail-infested strip in which nothing fit in or stuck out (“chicken fat” was editor Harvey Kurtzman’s inimitable, appropriately Semitic term). Judging from this anthology, cartoonists for the Defender (and Jet, and Ebony, and Negro Digest) favored sparser compositions, a comedy of isolation rather than clutter. Even when the images are cluttered, the eye is directed to one area, usually wherever the Black figure stands. When you’re the only Black person in one of these panels, which is pretty often, you triumph by owning your one-of-a-kindness, standing out in style. Hence clapping for the African tribesman, hence painting the white canvas black, hence cutting loose at a tight-assed WASP soiree, hence many of the best jokes in this book.

It’s tempting, with every week bringing news of another august periodical snuffed or lobotomized, to celebrate the old print Defender for having existed at all, though there’s a difference between celebrating and idealizing. The Defender gave Black cartoonists an audience and a steady-ish paycheck, but it also forced them to work quickly and sparsely and answer to a roomful of publishers who weren’t hired for their sparkling senses of humor.

Not by accident, the most ravishing cartoons in It’s Life As I See It were self-published. The Defender ran Turtel Onli’s Afrofuturist adventure NOG, Protector of the Pyramids for three months in 1979; after that, he ran it himself. Entire pages of the comic border on abstraction—one panel shows “a traveling spectrum of organic energy” that looks like a roaring, whooshing mirage—so more often than not it’s the sheer momentum of the compositions that pushes you from page to page. Yaoundé Olu’s “Life in America” (1982) has a cutesier, more subtly malevolent style that fits the hollow cheer of the Reagan era only too well.

Olu and Onli seem to have made the same deduction around the same time: If the legacy players are barely paying us a living wage for a watered-down version of our work, why not do everything ourselves and see what happens? Right about now, all working, thinking people should be asking themselves that question, for such is life in America. Or hell. Or paradise.