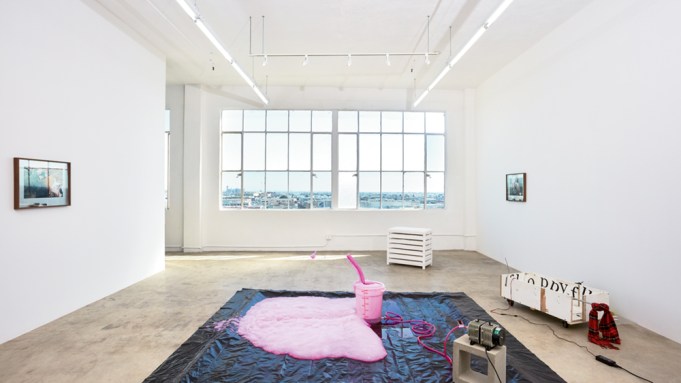 In George Egerton-Warburton’s satirical show, titled “English,” mechanical installations worked a lot at doing nothing, illustrating to extreme and absurd ends Marx’s theories of labor and alienation—that a stratified, mechanized society estranges workers from their humanity. The commentary was especially biting given the setting: a gallery located in an old factory building in Los Angeles’s garment district, in a suite next door to a trims manufacturer.

Six works from the exhibition’s namesake series (2017) feature DC motors sitting atop boxes variously constructed of cardboard, plywood, and steel. Such electrical motors have countless industrial applications. In fact, similar devices power the dozen sewing machines operated by workers next door. Egerton-Warburton’s seemingly self-running pieces suggest uncanny conflations of worker and machine or, to take it a step further, harbingers of a future in which a human work force has become obsolete. Also on view was a seventh “English” work, this one consisting of four matching white motors from juicers dating to the 1980s. The constantly whirring machinery filled the space with a bemusing yet unsettling din.

Adding to the noise was Paddock Addiction (2017), in which a food-storage pail fitted with a giant straw belched out tufts of lurid pink foam. The work germinated from Egerton-Warburton’s childhood memory of an enticing pink liquid that hedged the crops at his family’s farm in Australia and that, years later, he would learn was a potentially toxic fertilizer. (Viewers experienced their own sense of cognitive dissonance in the show with “Truffle Hunting”: three found photographs of truffle pigs encased in shadowbox frames with brown lumps that appeared to be the pungent delicacy from afar but were in fact dried dog feces.) Paddock Addiction was powered by another work, Symptom as Occupation (2017)—an open wooden box on wheels that contains a jury-rigged windshield-wiper motor. A pole attached to the motor moves back and forth, tied with a red plaid scarf that flops around flaccidly, giving the clumsy contraption a humanlike quality. Painted inside the box: the phrase floppy fugue. How much value can something have, the viewer is made to wonder, if its main use is to power something else?

Although humorous, the show crackled with anxiety. Small, white, doll-size beds placed near the various installations appeared like specters (“Beds,” 2015–). Beside the bright pink activity of Paddock Addiction, a stack of seven stood as a silent interloper. Rows of the beds hemmed in the engines in the “English” series, their inertness contrasting starkly with the constant motion. A gallery associate mentioned to me that Egerton-Warburton makes the bed sculptures during breaks in his career for fear of becoming idle. But while we might be defined by our work, he seemed to say throughout the show, we would be well advised to untether our identities from a concept so mercurial and beyond our control.

Review: Is the Ryobi Battery-Powered Walk-Behind Mower Worth Your Time?