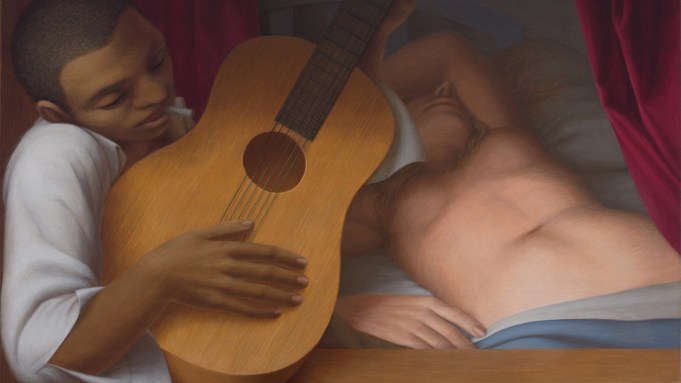 This small but stirring exhibition was titled “George Tooker: Contemplative Gaze,” begging the question, to whom does that gaze belong? To the figures who stare out of the egg tempera paintings and lithographs, eyes wide in concentration or distraction? Or to the visitor lulled into a state of quiet rumination by them? In Woman with Oranges (1977) and Window XI (1999), it is surely both, as the viewer locks eyes with characters by turns diffident and confident, reserved and brash. Featuring twelve works that Tooker (1920–2001) made between 1952 and 1999, the exhibition offered a small window onto his peculiar strain of pictorial solitude—a solitude found even or especially with figures shown in the company of others.

That physical closeness belies an insidious distancing in Tooker’s work is especially apparent in his city scenes, the best-known example of which is The Subway (1950), at the Whitney Museum of American Art in New York. In the DC Moore presentation, the painting Tree (1965) portrayed an analogous sense of isolation through a view of the natural world rather than the urban labyrinth. A man and a woman stand on opposite sides of a small tree, close to its trunk, their proximity and postures suggesting a level of complicity. Yet they look away from each other, separated not only by the tree but by some less visible impediment. The lithograph Voice (1977) features a similar but more dramatic composition, depicting two apprehensive-looking figures pressing against opposite sides of a door, their faces visible to the viewer but not to each other.

In 1943 and 1944, at the Art Students League of New York, Tooker studied with the stalwart painter of Coney Island crowd scenes, Reginald Marsh, whose use of egg tempera was of a piece with his mistrust of modernism. But Tooker’s style was shaped more significantly by the paintings of Jared French and Paul Cadmus, which are often deemed “magic realist” (though that term, coined in Europe, is something of a misnomer in an American context, and indeed Tooker rejected it) and which feature frank expressions of same-sex desire.

Guitar (1957) brings together two elements commonly found in Tooker’s work: the compositional device of rendering the image as a scene in a window, and an exploration of racial themes. (Tooker, with his partner, the painter William Christopher, was actively involved in the Civil Rights movement.) In this painting, we view a touching scene of interracial intimacy. A nude white woman reclines on a bed foreshortened in a shallow room, as an African American man leans out the window and puffs on what may be a postcoital cigarette, his hand poised over his guitar mid-strum. A trio of red details—window curtains pulled back to reveal the woman’s midriff, a ribbon unfurled across the sill, and a velvet frame around the painting—alludes to a carnal encounter that would have outraged contemporary sensibilities (and laws). Less straightforward is the appearance of an African American man in Builders (1952), the left sleeve of his shirt inexplicably torn open. As striking as this painting’s almost religious evocations—the spectral main figure appears almost to be walking on a body of water in the background—are the plants that sprout from the soil depicted along the work’s bottom edge, as if in the foreground of a Renaissance panel.

While studying English literature at Harvard, Tooker made repeated visits to the Fogg Museum’s Renaissance and medieval collections—encounters that would echo in his practice for more than half a century. A 1964 study for a work titled Sleep shows Tooker roughing out one-point perspective, while the painting Window XI (1999) evokes the contrapposto of ancient statuary. This latter painting, like Guitar, portrays two figures in a window: one half-naked man gazing at the viewer, and another behind him with his back turned. The front-facing figure’s bent, upraised arm runs along the painting’s (and window’s) frame. The warm red background seems to leach into his body, and his sensuality—a sliver of underwear creeping above his pants—is matched by the sentience conveyed by his faint smile. For all Tooker’s resistance to modernism, his painting exceeds the strictures of academic dogma or pastiche. Appearing almost cinematic, the drawing Window (1994) offers a close-up view of a couple lit from below as they lean out of their apartment building with evident curiosity. Even when human beings fail to connect in Tooker’s images, they strive to shake off the confines of solitude.