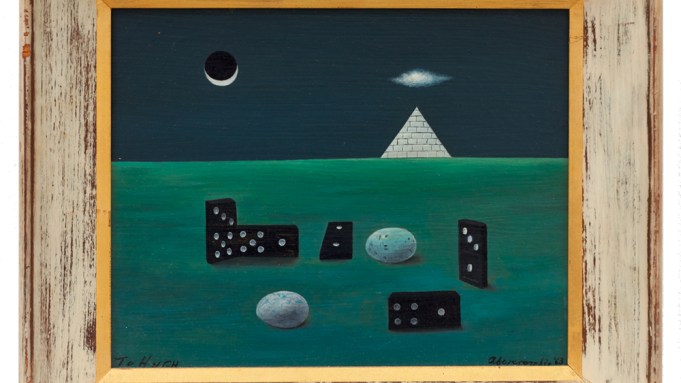 During the 1940s and ’50s, the Chicago-based Surrealist Gertrude Abercrombie (1909–1977) was known locally as the “queen of the bohemian artists.” A self-styled regional “other Gertrude,” she hosted salons in her Hyde Park home that were frequented by artists, writers, and jazz musicians based in, or passing through, the city. Regular guests included Thornton Wilder, Sonny Rollins, and Dizzy Gillespie; Gillespie even led the band at her 1948 wedding to music critic Frank Sandiford. Despite Abercrombie’s prominence in Chicago, her paintings were, until recently, little known outside the Midwest. A compact retrospective at Karma, organized in collaboration with independent curator (and former Karma director) Dan Nadel, brought her work to New York for the first time since 1952, with roughly seventy paintings dated between 1934 and 1971 arranged chronologically in a clockwise loop around the gallery’s two rooms.

Though indebted to the work of Magritte and de Chirico, Abercrombie’s Surrealism was largely homegrown, taking its cues from the atmosphere and culture of her Midwestern surroundings. Employing oil on masonite board in lieu of canvas, she primarily painted still lifes, portraits, and landscapes that have the uncanny quality of a lucid dream. In the exhibition’s earliest work, Untitled (Slaughterhouse at Aledo), 1934, she adopted the sort of rural subject associated with the period’s American Scene painting, but imbued it with an eerie dread, depicting a slaughterhouse at night so it looms over an empty landscape. Embracing her lack of formal training, she cultivated a deliberately naive style characterized by meticulously rendered objects—she began her career as a commercial illustrator before taking up painting in the early 1930s—set within minimal compositions, often with an ambiguous spatial depth.

By the 1940s, Abercrombie had developed a lexicon of motifs with cryptically autobiographical significance that would recur in her paintings throughout the rest of her career: shells, eggs, black cats, doors, bowls of fruit, Victorian furniture, moonlit landscapes. In Untitled (Blue Screen, Black Cat, Print of Same), 1945, a blue folding screen and a black cat stand in a nearly empty room; the scene is doubled in the painting-within-a-painting hanging on the room’s wall, resulting in a bizarre mise en abyme. In Shell and Drape (1952), a surface scattered with seashells is framed by a backdrop of draped fabric held up with trompe l’oeil hatpins. Several paintings, including Demolition Doors (1964), depict rows of variously colored doors leading nowhere, alluding to the midcentury Chicago practice of using old doors to shield demolition sites, a repurposing that Abercrombie likely saw as a kind of Surrealist assemblage.

While all the paintings had an eccentric charm, the most striking were Abercrombie’s miniatures: exquisite little gems, some barely larger than a postage stamp, encased in decorative frames. A number of them adapt formats and compositions she employed in larger paintings, but play with the experience of scale: the tiny still life Compote and Grapes (1941), for instance, is placed within a wooden frame featuring a concentric square pattern that gives the illusion of spatial recession, as if the viewer were looking at the scene through a peephole. Others reproduce isolated objects—shells, toy jacks—in painstaking, almost reverent, detail. Abercrombie often made her miniatures as gifts; several are inscribed with the names of their recipients, heightening the already palpable intimacy of the diminutive format.

Toward the end of her life, divorced for the second time and hobbled by alcoholism and arthritis, Abercrombie became increasingly reclusive. The exhibition’s later works portrayed more fantastical subjects, the artist perhaps imagining the possibility of escaping to another world entirely: in the 1963 Moored to the Moon, a crescent moon is tethered to a buoy floating in a bright turquoise sea; Birds, Eggs and Dominoes with Pyramid, from the same year, pictures an enigmatic arrangement of dominoes and blue-tinged eggs with a pyramid rising in the distance. As Abercrombie wrote in a notebook, “Surrealism is meant for me because I am a pretty realistic person but I don’t like all I see. So I dream that it is changed.”