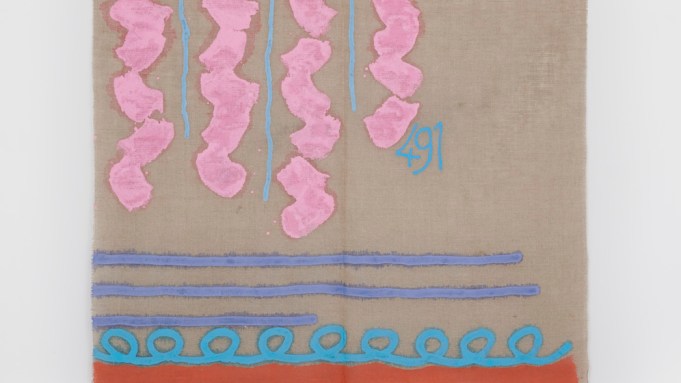 For the last several years, I’ve felt as though I’m reliving the ’90s. The president, a paunchy Boomer and probable sex criminal, has been impeached but remains hugely popular with his base. Big TV events have included new “Twin Peaks” episodes, old “Friends” episodes, and a miniseries about OJ Simpson. History seems to be coming to an end, though not in the sense that Francis Fukayama meant. There’s another Space Jam in the works.

The timing, in short, is just right for “Giorgio Griffa: The 1990s,” the latest in a steady stream of Griffa exhibitions held at Casey Kaplan since 2012, when the gallery staged his first show in New York in four decades. All fourteen of the paintings in this exhibition (which can be seen by appointment), were completed between 1991 and 1999, not that you could tell from a glance—the main points of Griffa’s practice (understated, rhythmic abstraction; acrylic paint; unstretched canvases tacked directly to the walls) have barely changed since he began painting full-time in the late ’60s. But in subtler ways, these works show him consolidating the techniques he developed in the first half of his career and posing new stylistic challenges he’s attacked in the second.

As seen in Casey Kaplan’s 2015 exhibition “Giorgio Griffa: The 1970s,” Griffa’s first mature paintings displayed the stylistic roughness and sparseness valued by Arte Povera painters, with whom he shared a dealer, Ileana Sonnabend, and a hometown, Turin, where he still lives and works. More like a family friend than a card-carrying member of the movement, he took what he needed from it and moved on. In the ’80s—the era on which Kaplan’s 2018 Griffa show focused—his style got more exuberant, with the colors ripening and the brushstrokes starting to cover more ground. His ’90s output suggests an odd truce between the previous decades: sparseness and exuberance, underdog and showman. The acrylics are bright but more diluted than before, so that they sink into the canvas instead of resting on top of it. There’s a stronger sense of negative space than in his ’80s work, but not as strong as in his ’70s work.

The quintessential ’90s Griffa brushstroke (found in, for instance, Tre linee con arabesco n. 491, from 1992, or Dittico lieve odulaato, from 1996) is a line that starts on one side of the canvas, crawls toward the other without thinning or thickening, and throws in the towel with a few feet, or inches, left to go. It’s been cut short, robbed of its momentum, but you still imagine it pushing on to the edge of the painting and beyond. This is a trickier feat than it seems. I didn’t much care for the smaller canvases in the exhibition—they don’t seem provocatively incomplete so much as slack. Griffa is more precise (just better, actually) when he’s working on a larger scale. In Tre linee con arabesco n. 199, he lets you savor the paint’s progress across six and a half feet of rough, brownish canvas, lets you measure it against the deep creases in the support until it seems as vast and precarious as train tracks through a desert.

But in this painting, as in most of Griffa’s best work, the canvas is the first and last thing you notice. It gives the paint a directness and urgency he learned from Arte Povera and has held onto since forging his own path. In the show’s most evocative painting, Polittico arabesco con linee orizzontail (1997), lines and loops join to form a barbed wire fence, and it would be easy to dismiss this as a glib little flourish—so conveniently, self-consciously political that the word “political” appears in the work’s title. But here again, the gravitas of the materials rescues the image, and makes the arabesque seem not slight but suggestive and, yes, political. The paintings in this show are neither as conspicuously principled as Griffa’s early, post-’68 work nor as flashily fun as his ’80s stuff, but they have their own nervous energy. They’re capable of generating a hushed anticipation, hinting at something yet to come, not that this something is necessarily good. All of which is to say, they strike me as very ’90s indeed.