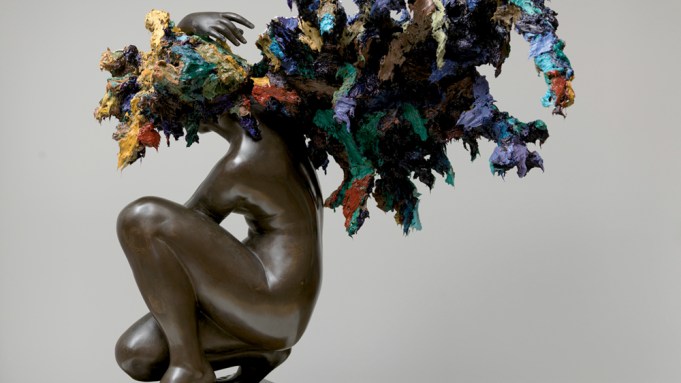 British artist Glenn Brown came to prominence in the early 1990s with his ironic appropriations of Frank Auerbach’s portraits. He based these paintings on bad reproductions, creating images with flat surfaces emptied of Auerbach’s vigorous impasto. Crude and clunky, the works had a freshness about them, partly to do with the cocky disregard he—like his Young British Artist cohorts—displayed for his elders and for art history in general. But as shown in his first London exhibition in almost a decade, titled “Come to Dust,” Brown hasn’t really moved his clever postmodern concept forward since he started out. Sure, he incorporates more of his own flourishes in color, form, and composition than he used to, and has even extended his appropriation to drawing and sculpture—all of which resulted in an extremely slick show. But while his virtuosity as a craftsman is undeniable, the presentation seemed largely inert, and elicited a sense of déjà vu.

His three versions of Rembrandt’s Bust of a Laughing Young Man (ca. 1629–30), whose figure he has endowed with a red clown nose and blue face rendered in trippy, swirling brushstrokes, are close cousins of paintings such as The Great Masturbator (2006), in which he portrayed a Rembrandt youth as a sort of sickly, green-faced creature. The element of gothic creepiness that characterized the ghoulish upside-down figure in Nausea (2008) was echoed here in works like Die Mutter des Künstlers (2016), which, based on a Delacroix image, depicts a headless nude woman in a blue void extending a bloody finger, and Life on the Moon (2016), which turns the figure in Élisabeth Louise Vigée Le Brun’s Madame Grand (1783) into a possessed creature with red-rimmed eyes rolling upward and a blue face framed by green hair. Brown argues that his paintings update art historical works for a contemporary audience, but they can feel like “edgy” Pop-inspired kitsch that street vendors might hawk to tourists outside famous museums.

Four years ago, Brown temporarily abandoned oil painting in favor of black-and-white sketchlike compositions made with India ink and acrylic, and one room of the show was devoted to such works. Many superimpose two heads sourced from works by two different artists. Dungeness B (2016), for instance, fuses a woman’s head by Guido Reni with a bearded man’s face by Raphael. While the viewer stares at the image, the facial traits move in and out of focus in a mildly intriguing manner. This and several similar sketches were named after British nuclear power stations, with Brown perhaps making an analogy between his makeovers of artists’ works and the transformative potential of atomic fission. Other titles derived from rock and pop songs and conveyed a liveliness that was often missing from Brown’s works themselves.

The exceptions were the sculptures, which offered an appealing sense of conflict. In some cases, Brown partly covered classical bronze figures he bought at auction with thick layers of vibrant oil and acrylic, giving them the appearance of being engulfed in organic, coral-like matter. In others, he sculpted his own figurative forms inspired by other artists’ works and slathered them fully in paint, rendering them almost entirely abstract. Paintings of feet by Georg Baselitz were the starting point for the three-part sculpture Ain’t No Flies on the Lamb of God (2017), which borrows its title from a hymn sung by an Evelyn Waugh character and offers an otherwordly take on the Calvary. Although such sculptures are clearly rooted in appropriation, they seem more expressive and freer from their sources than Brown’s two-dimensional works do. I’d be curious to see what would happen if he broke free of such restraints entirely.