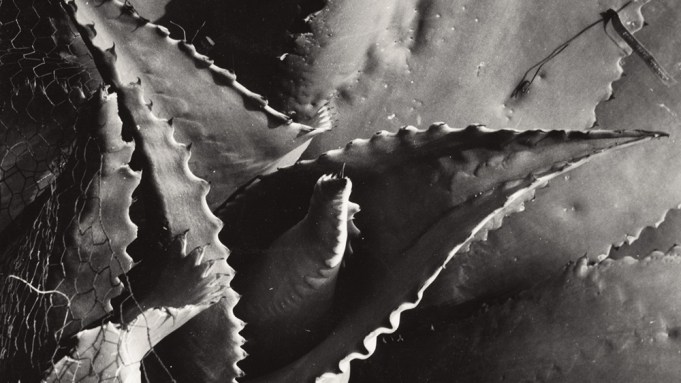 A striking photograph in the exhibition “Lola Álvarez Bravo: Picturing Mexico,” on view at the Pulitzer Arts Foundation in St. Louis through February 16, 2019, could be read as a metaphor for the ongoing recalibration of the art history canon. Titled Some go up and others go down (ca.1940), the image shows three isolated figures on a zigzagging iron staircase. With its near-abstract geometries and slices of light and shadow it is a quintessentially modernist work—which may surprise viewers who know Alvarez Bravo from her straightforward photographic portraits of artists such as Diego Rivera and his wife, Frida Kahlo. But in the context of the show, it signals how reputations of underrecognized women are rising as they gain admittance to male-dominated historical narratives.

Álvarez Bravo (1903-93) is often overlooked, while her husband Manuel Álvarez Bravo (1902-2002) is acclaimed. In 1997, when the Museum of Modern Art in New York mounted a large retrospective of his work, curator Susan Kismaric hailed Manuel as “one of the inventors of the modern vocabulary of photography,” citing his early experiments with abstraction as well as later works, praised by European Surrealists, that made ordinary scenes look extraordinary.

Manuel was indeed a major talent in avant-garde art, which flowered in Mexico after the revolution of 1910–20, but Lola—as the Pulitzer’s exhibition demonstrates—was a seminal figure, too. She learned the rudiments of photography from her husband and was an integral part of the circle that included innovative photographers like Henri Cartier-Bresson, Edward Weston, Tina Modotti, Paul Strand, and André Kertész, who flocked to Mexico City in the 1920s. After the couple separated in 1934, she became a professional photojournalist, traveling throughout Mexico to capture images of Indigenous people and architecture for photo essays published in leftist periodicals.

The nearly fifty works on display range from experimental to documentary images and showcase Álvarez Bravo’s keen eye and skillful use of unconventional framing or cropping to emphasize line, shape, and the play of light and shadow. Everyday life in Mexico was a particular inspiration for her non-commercial work, which she referred to as mis fotos, mi arte.

When it suited her, Álvarez Bravo defied reigning avant-garde conventions. One example is Plant Sex (ca.1948), a tightly cropped shot of a maguey plant, a type of agave. Influenced by Weston and Modotti’s sensual closeups of peppers and calla lilies, Álvarez Bravo focused on succulent’s fleshy central stalk and surrounding leaves, transforming it into a simulacrum of both male and female genitalia. In printing the image, she ignored the prevailing ethos of straight photography advocated by revered artists like Cartier-Bresson, who inveighed against manipulating or editing a picture in reaction to the darkroom tricks and soft focus of Pictorialism—considered “feminine” and too painterly. Daring to differ, Álvarez Bravo rotated the negative ninety degrees clockwise, complicating a reading of the photograph by introducing a seemingly impossible light source below the plant.

The regime that took power after the Mexican Revolution saw art as a means of unifying a country with an illiteracy rate of nearly ninety percent. Rivera, David Alfaro Siqueiros, and José Clemente Orozco—all men Álvarez Bravo knew well—were commissioned to paint monumental murals glorifying peasants, the working class, and revolutionary heroes. Álvarez Bravo worked on a smaller scale, producing documentary photojournalism for the state. Even in this genre, her work was less didactic and more formalist than that of her peers. The Washerwomen (ca.1940) portrays laundresses as tiny figures, seen from the rear, engulfed by raking shadows that propel the eye from the back to the front of the picture. In the debate about the camera as either an objective recorder of reality or tool to express an artist’s subjective vision, Álvarez Bravo chose suggestive expression.

The exhibition is organized thematically, with images grouped by subject—landscapes, architecture, laborers, and so on. One section collects Álvarez Bravo’s best-known work: portraits of famous artists. Rivera works at a table in his studio. A dapper Cartier-Bresson aims his Leica at an unfinished mural by Siqueiros. The architect Félix Candela sits in a Bertoia chair. Hanging beside this pensive portrait is Álvarez Bravo’s Untitled, 1954, which presents the Candela-designed Church of Our Lady of the Miraculous Medal as a purely formal arrangement of slanted pillars and billowy inverted cones—geometry enlivened by tonal contrasts.

Álvarez Bravo was not only a pioneering photographer; she was also an early exemplar of la chica moderna, the modern woman, in a time when women were just beginning to abscond from the domestic sphere into professions. Álvarez Bravo was one of the first successful female photojournalists, leaving the studio to trek throughout Mexico. In a country of oppressive and virulent machismo, she faced much discrimination because of her gender and was often mocked by male reporters. But, as she told an interviewer in 1979, “I wanted to be something, to find out what is my truth.”

That truth was multifaceted. Besides her work as a photographer, Álvarez Bravo was also an art teacher, a gallerist, a curator, and the co-founder of the first film society in Mexico City. She gave her friend Frida Kahlo her first solo show in Mexico shortly before Kahlo died. Álvarez Bravo’s portrait, Frida Kahlo (on her bed), 1940s, shows the painter in folkloric costume, her face half in shadow. Perhaps the photographer was alluding to Kahlo’s life in the shadow of her more famous husband—a life Álvarez Bravo knew from personal experience.

Álvarez Bravo’s career intersected with a period during which Mexico was transformed socially, economically, and politically. She not only documented those changes but played a significant role in shaping her country’s post-revolutionary culture. As she modestly said in the introduction to a 1982 monograph, “If something useful results from my photographs, it will be as a chronicle of my country, my times, my people, how Mexico has changed.”