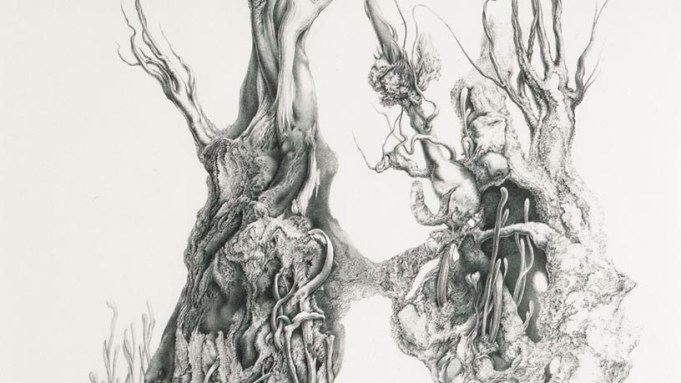 Gray Foy (1922–2012) is scarcely known today but should be part of the canon of midcentury American art. In the 1940s and ’50s, he was recognized as a refined practitioner of the US offshoots of Surrealism and, more specifically, Magic Realism. He shares a sensibility with artists such as Peter Blume, Ivan Albright, Paul Cadmus, and Pavel Tchelitchew, who were also considered Magic Realists and with whom he often showed at the time. This recent exhibition, curated by Foy biographer Don Quaintance and comprising thirty-one works spanning 1941 to 1975, focused on his most significant achievement—an expansive body of finely wrought drawings.

Born in Dallas, Foy was raised by his mother in Los Angeles after his parents divorced when he was three. He studied art at Los Angeles City College and gravitated to theater set design, inspired in part by Eugene Berman’s work in that field. By the late 1940s, living in New York, Foy had established a modest career as a designer of book and album covers. His earliest “fine art” drawings in the show suggested a rather personal, psychosexual exploration. Their infinite spaces and eroticized imagery recall those in early works by Salvador Dalí and Max Ernst. Exquisite, uncanny examples like Untitled (Interior with Distorted Figures and Armoire) and Untitled (Interior with Morphing Figures and Animals), both ca. 1944, center on figures of ambiguous gender that appear to be in the process of molting, or transmogrifying.

The largest (21½ by 27¾ inches) and most ambitious drawing from this period was Dimensions (1945–46), which Foy created according to his usual technique: working from right to left, refining and completing small sections of the composition before moving on to the next. Dimensions demands slow and careful observation (as do many of Foy’s works, a quality the gallery recognized by providing viewers with magnifying glasses). Portraying an interconnected conglomeration of sensuously undulating figures and objects in a shallow, quasi-Cubist faceted space, the dense composition remains resistant to rational analysis or any attempt to determine an overall narrative.

By the early 1950s, Foy had abandoned the human figure for nature motifs, which he pursued for the following two decades. Most of his drawings from this era feature images of exotic flora rendered in hyperrealistic detail. Works such as Uprooted Plants (aka Crossed Roots), 1955, and Grape Hyacinths and Fungi (1956), inspired by visits to the countryside but created from memory, emulate the precise technique of Renaissance masters like Dürer or Leonardo. But in Foy’s hallucinatory depictions of nature, as in his earlier figural drawings, something seemingly mundane suddenly appears unfamiliar and even otherworldly.

When Foy’s New York gallery, Durlacher Bros., closed in the mid-1960s, he, like many others in Durlacher’s stable of Surrealist-inspired painters, found himself without art world support and wholly out of step with contemporary art trends. In the mid-1970s, he abandoned art-making altogether and devoted himself instead to an extensive travel schedule and social life with his partner, Leo Lerman, a writer and Condé Nast editor in charge over the years of glossy publications such as Mademoiselle, Vogue, and Vanity Fair. Foy and Lerman hosted weekly gatherings of the city’s literati and glitterati. Despite shunning the art world, Foy carefully preserved his works. Today, they appear remarkably fresh and vibrant, imparting the singular vision of an artist who was able to portray our world in strange new ways.