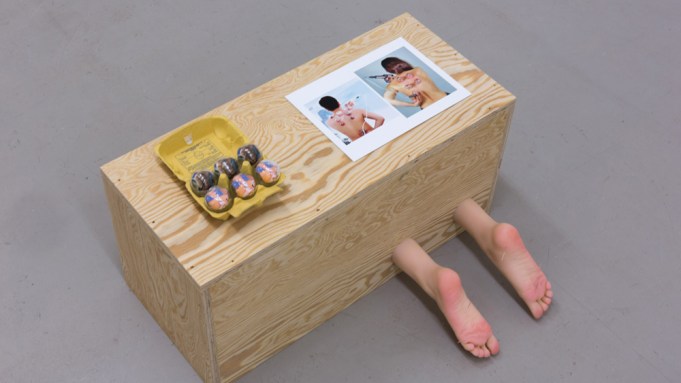 “Caring for myself is not self-indulgence,” wrote poet and activist Audre Lorde in 1988. “It is self-preservation, and that is an act of political warfare.” The concept of self-care has its origins in the Civil Rights and feminist movements. However, these radical roots have been obscured by the contemporary wellness industry, which promotes elite forms of consumption meant to foster physical and mental health. Organized by Amanda Donnan, curator at the Frye Art Museum, “Group Therapy” features works by twelve artists who examine the notion of self-care from multiple angles and question how the museum itself might function as a site for catharsis and healing in the context of neoliberal capitalism.

Several of the works reclaim the political stakes of Lorde’s original call for self-preservation. Displayed near the exhibition entrance, Kandis Williams’s large-scale collages are composed of dozens of images of hands photocopied from photographs of 1960s civil rights activists and assembled into symmetrical arrays. Like the Rorschach inkblot tests they resemble, these collages suggest a diagnostic function, asking viewers to assess the preconceived ideas they may hold about the history of racialized trauma and activism in America. The psychological basis of political commitment is underscored further by Liz Magic Laser’s installation Primal Speech (2016), which revisits the primal therapy techniques popular in the 1970s. Laser covered the walls of a gallery with padded gray mats and furnished the space with gray reclining cushions and pillows shaped like the mascots and symbols of major political parties in the United States and the United Kingdom. A video playing on a wall-mounted monitor depicts five actors lying on gray cushions inside a padded room similar to the one Laser created in the gallery. An actress playing professional life coach and author Valerie Bell prompts them to reflect on their feelings toward people in positions of power. Their responses reveal how personal traumas and political anxieties can inform each other—one participant’s confession of admiration for Donald Trump, for instance, gives way to expressions of rage toward an ex-lover. At the video’s tense climax, all five performers exorcise their anger in a collective fit of rocking, thrashing, and crying out. In a series of workshops led by Laser the real Bell at the Frye—one of several initiatives that transformed the museum into something of a drop-in clinic—visitors were similarly encouraged to release their primal emotions.

Other projects revel in the surrealism of the self-care marketplace. Maryam Jafri’s sculptures conjure the bizarre products that result when traditional healing practices are appropriated and commodified. In Depression and Anxiety (both 2017), acupuncture needles radiate from uncannily realistic silicone feet protruding from wooden bases, while Self-care (2017) comprises a roll of toilet paper made of yoga mat material. The three works  offer scathing, albeit comical, critiques of the capitalist process by which healing techniques of colonized people have been offered in debased forms to predominantly white consumers in the West. In Shana Moulton’s video installations, it can be difficult to distinguish legitimate healing from superficial consumption. The videos center on her alter ego, Cynthia, whose quest for spiritual realignment takes her through a digital world of glitchy graphics. On-screen, Moulton engages with a variety of glowing orbs and crystals, and similar objects are arrayed in front of the projection of My Life as an INFJ (2015–16). Yet for all the kitsch adornment, Moulton’s work expresses a sincere, quasi-utopian desire to process and release some repressed trauma.

The tension implicit in Moulton’s work runs through the entire exhibition. If museums have been traditionally regarded as places for self-improvement and focused contemplation, then perhaps they can become spaces for spiritual and emotional healing, broadly defined. At the same time, the tendency of consumer culture to transform self-care into self-parody looms large in the museum’s gift shop, where the sale of crystals and tarot decks reduces the exhibition’s themes to trendy trinkets. Just as it’s impossible to disentangle the museum from considerations of class and wealth, it’s impossible to fully wrest self-care from its capitalist implications. “Group Therapy” succeeds not by succumbing to earnestness or cynicism, but rather by affirming the value of self-care in all its fraught, messy complexity.