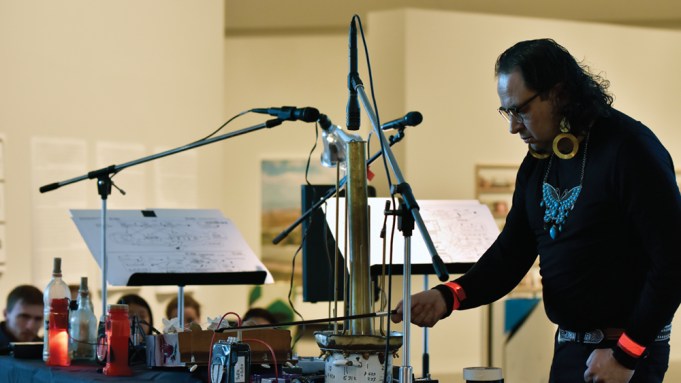 Now a faculty member at the California College of the Arts, Guillermo Galindo was trained as a composer at the Conservatorio Nacional de Música in Mexico City and wrote a number of pieces for orchestra, string quartet, and other ensembles in the tradition of Western classical music. But in 2006 he started building his own instruments, performing compositions on them himself or improvising with them, often inviting other musicians, not necessarily professionals, to take part. The Tang Teaching Museum and Art Gallery’s exhibition “Along the Border” presented a selection of instruments that Galindo made from objects that he and photographer Richard Misrach gathered on trips to the United States-Mexico border between 2012 and 2014. The tightly curated show also included a pair of graphic scores printed on nylon flags, and a video produced by the Tang with clips of US politicians talking about migration issues, as a reminder of the project’s political context.

Sirvientes y Escaleras (Servants and Ladders, 2015) is an aluminum ladder with metal strings stretched taut between its rungs by tuning pegs and with a doll’s hand, a plastic gallon jug, and other objects attached to it at various points. A vitrine displayed a pair of musical objects that Galindo calls “Erjumex,” a portmanteau of “erhu,” the name of a two-stringed Chinese fiddle, and “Jumex,” the brand name of a popular Mexican juice, rusty cans of which form sound boxes for these instruments. The crank spindle in the kinetic sculpture Zapatello (2014) sports a pair of human silhouettes used by border patrols in target practice; the figures are riddled with bullet holes. Below the crank are a boot and a glove, which alternately thump a rawhide drum skin stretched over a big tire at the sculpture’s base. A video on a nearby monitor showed Galindo playing Zapatello in concert. There was also a sculpture with no apparent way of producing sound: in this piece, a bicycle seat appears on one end of a metal armature and a sturdy plastic-and-metal chair—the sort you’d find in a school—on the other, the latter with a bicycle wheel attached to its seat. This immobile, altered means of conveyance underscored the fact that all the objects here had been removed from use, presented in an arrested state.

On March 20, in the Tang’s atrium, Galindo performed Sonic Borders III (2018), a composition for synthesizer and handmade instruments. By blowing into the openings at the top of red plastic crosses, he created plaintive sibilants suggestive of desert winds or the hum of surveillance drones, capturing them in feedback loops to produce a persistent background noise. He used his own voice as well, repeating the syllables of the word “exposure” one by one, and barking to evoke the border’s canine patrols.

Some of the instruments Galindo played were of the type he made from objects gathered at the border. Partway through the piece, for instance, he donned anklets of spent cartridges from the border patrol’s shooting range, and they clacked hollowly as he moved around the stage. Other instruments comprised items he collected in Germany and Greece last summer, when he was taking part in Documenta 14. That edition of the quinquennial was split between Kassel and Athens, and Galindo wanted to incorporate objects from each country in a performance in Kassel. He built a waterphone—a percussion instrument invented in the late 1960s and often heard in movie scores—with a pot from a refugee camp in Kassel as a resonant chamber, which he sealed shut with a metal plate found outside a camp on the island of Lesbos.

During Sonic Borders III, Galindo drew a cheap bow from a child’s violin across the waterphone’s spokes to release faint wails and struck the same rods to produce percussive rings. Waterphone spokes are typically bronze, but Galindo’s are brass, a resonant material more commonly used to make horn instruments. In building his instruments, Galindo ignores the borders set by musical convention. He listens to found objects and, in effect, lets them speak as they will. He thus creates not only innovative musical textures but a political model for the treatment of those cast adrift by global unrest.