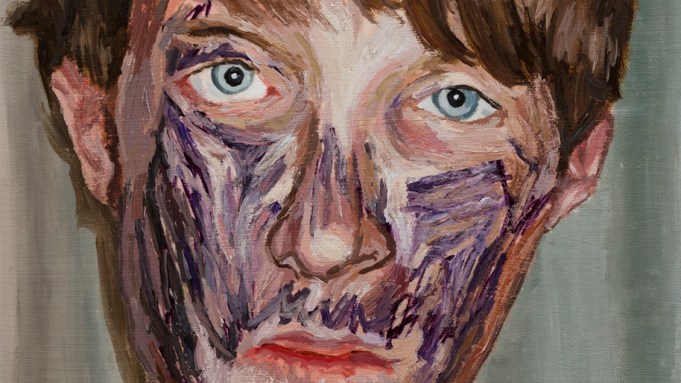 What subjects are appropriate for which artists—and what is simply appropriation? For Hamishi Farah, portraiture rushes to the heart of the question. His exhibition “Antagoni,” at Château Shatto, includes five works (all 2020) made by the hand of Rachel Dolezal. In 2015, it emerged that Dolezal, whose parents are both white, had passed as Black for years, during which she earned an MFA from Howard University and briefly headed a chapter of the NAACP. Raked over in public opinion and shunned by activists, Dolezal has apparently retreated into art to express her trans-racial sense of self. In Black & White Cookie, she presents herself in a head wrap, holding a black-and-white cookie bitten at the midline. The painting is uncontrite; so are Banished, a standing self-portrait in charcoal, in which she appears with a hole drawn in her belly the same size and shape as the dense black sun pictured overhead, and Drowning, a self-portrait of the artist encircled by sharks. Farah had the gallery commission these pictures, and then—without Dolezal’s permission—countersigned each one, claiming them as readymades. In mid-December, Dolezal’s lawyer demanded that Farah’s signature be removed. The reasoning, however, reveals a pedestrian view of authorship: Dolezal wanted to ensure that potential buyers knew whom to contact for fresh commissions.

Another suite of six portraits, painted by Farah based on images pulled from the web, is just as fraught. Joey and Matthew portray figures in hapless blackface: mug shots of a pair of white burglars who drunkenly obscured their faces with Sharpie. After Vidaperfect, Gogograham & Marykang employs a backstage shot from the designer Gogo Graham’s FW20 runway show; it depicts a model masked by a taupe stocking, as if ready to burgle. These photos have their own ethics, but in appropriating or reproducing the image—as the photograph breaks into brushstrokes—the burden of representing iffy subjects shifts onto the painter. At the same time, Farah’s fidelity to his sources retains the idiosyncratic or idiotic ways each subject thwarts the black/white binary. Weirdest and saddest is Argyria Blue (The Ghost of Paul Karason), depicting a man whose ingestion of homemade colloidal silver turned his skin a weary navy, through the same chemical reaction underlying silver-based (indeed, black-and-white) photography. Karason spent a chunk of his final years homeless, shunned for the color of his skin. Each painting muddles ideas of facial recognition, race, and the Other; in contrast to the two-toned obsession behind Dolezal’s self-portraits, all but one of which are grayscale, Farah’s six emphasize the full visible spectrum.

Even so, Farah’s show also mocked the facile rainbow liberalism that doesn’t care if you’re Black or white, blue or green. Untitled (Bee), sandwiched between Argyria and After Vidaperfect, is based on a photo that accompanied a Daily Mail article detailing how a wasp’s facial markings advertise its fighting prowess. Only racist pseudoscientists claim to predict aggressiveness, intelligence, or virility in the human species based on physiognomy. But Farah’s appropriation of Dolezal, her artwork and messy ethics both, neither absolves nor condemns her. Instead, “Antagoni”—a show with a title ambivalently shy of antagonism—envelops artist, subject, and viewer in a cascade of sticky interpreting and representing.

Farah has been here before. His painting Representation of Arlo (2018) pushed the controversy over the inclusion of Dana Schutz’s expressionist riff on the murdered Emmett Till in the 2017 Whitney Biennial in discomfiting, productive directions. Schutz maintained that her painting spoke to the sincere, universal empathy of motherhood; Farah duly based his on a photograph of Schutz’s son. Alas, critics took Farah’s gauzy, almost saccharine portrait of a white artist’s white son as an aggressive, even violent act. In other words, they reprised Schutz and her defenders’ failure to give painting its due alongside photography as a technology of race. “Antagoni” tests the same humanist tenet that my freedom ends where it restricts yours. Here, it holds. In “Antagoni,” there is another picture of a mother and child: Motherhood, by Rachel Dolezal.

From Iceland to Norway: Meet All the Michelin-Starred Nordic Restaurants of 2022