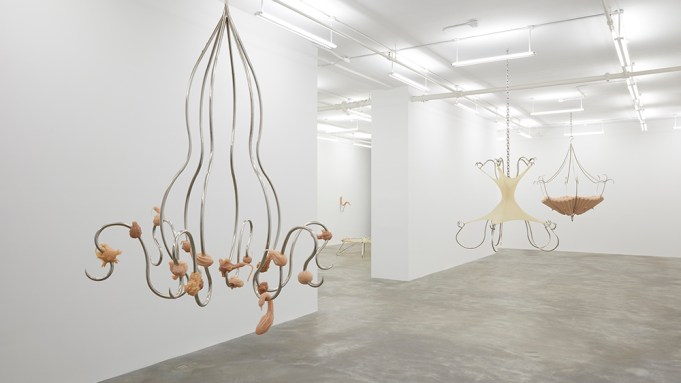 Combining fleshy silicone and spindly nickel-plated steel rods in strangely alluring ways, the sculptures in Hannah Levy’s show, “Pendulous Picnic,” suggested the elegant fantasies of a paraphiliac. Three dangerous-looking chandelierlike works hung in the main space. The first was shaped like a squid, with silicone gobs resembling rotting gourds impaled on its curling spike tentacles. The second work’s middle section was a gown of thin silicone stretched taut by dainty claws. The third looked like an upended parasol but with a nippled flotation device for a canopy. As I viewed these sculptures, I kept wanting to crawl under them and have someone cut the lusciously thick chains suspending them from the ceiling, so that I could be crushed. Indeed, the exhibition raised some thorny questions: How does art make danger seem erotic? When is it OK for us to be attracted to the things that hurt or destroy us?

In much of Levy’s work, design objects become partially animal or vegetable. In her 2018 show in Dublin, “Panic Hardware,” demonic, sexy chairs pitched too steeply to be sat on seemed to tiptoe toward you on clawed feet. Her Bone-in (2019) was a giant chromed femur sculpture dominating Jeffrey Stark’s small gallery in Manhattan’s Chinatown. The works in “Pendulous Picnic” were at once very Bourgeois and very bourgeois, recalling the surreal forms of the French-American artist as well as impeccable, slightly intimidating pieces of upscale decor. A side room featured sconces in which large, limp silicone casts of asparagus lay atop bent spikes. At the center of the space was a trampoline that masochistically denied would-be bouncers its potential joys. Its rim was encircled with spiky curlicues, and its scaffolding pushed up the silicone mat at the center, creating a kind of baby bump.

Levy’s work offers a romance between flesh and machine that is deeply appealing, even if the sterile/organic binaries of her materials can be a little on the nose. Contemporary design focuses increasingly on rendering objects and environments not only functional and pleasurable—in the manner of modern design—but intelligent, capable of surveilling and sucking the capital out of us. Levy’s works reflect a possible direction for our evolving relationship with design. Though her sculptures appear threatening, they are also an ode to the sensual, to the turn-ons of beautiful objects, to the erogenous design possibilities that might lie ahead if commodities could be smart and sensate enough to fetishize us back.