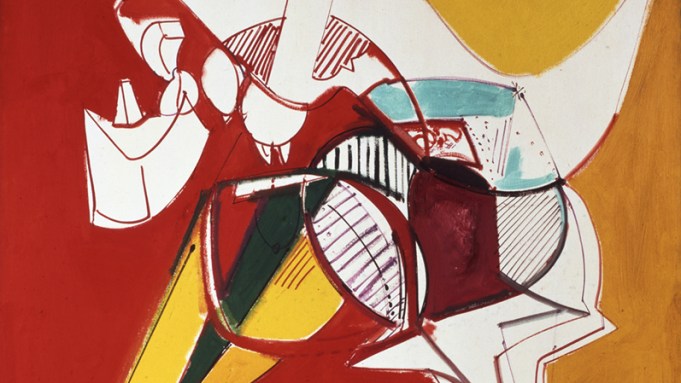 The painter Hans Hofmann remains best known for his “push-pull” method, by which pictorial elements emerge, recede, and jostle in dialectical tension across a canvas’s surface. A number of works on display in the lively retrospective of Hofmann’s corpus at the Berkeley Art Museum and Pacific Film Archive (BAMPFA) exemplify this technique, such as Sanctum Sanctorum (Holy of Holies—Holy Place), 1962, in which quadrilaterals of various dimensions and colors loom in a pictorial field by turns smooth and coarse, yawning and flat. That the image evokes Mondrian’s painting as much as it rhymes with Rothko’s is hardly surprising. By the time Hofmann emigrated from his native Germany to the United States in 1932, he was already pursuing a variety of modernist tendencies. Having established an art school in 1915 in Munich and facing the growing Nazi threat, Hofmann brought his pedagogical charisma to the University of California, Berkeley, in 1930. Soon thereafter, he opened schools in New York and Provincetown. The Museum of Modern Art honored his enormously influential teaching practice by organizing the exhibition “Hans Hofmann and His Students,” which toured the United States between 1963 and 1965 and featured works by some fifty artists, ranging from Louise Nevelson to Helen Frankenthaler to Allan Kaprow. Hofmann saw his time at UC Berkeley as having been pivotal to his career in this country. In the 1960s, he gifted around fifty of his paintings to the school and helped fund the construction of the original building for the university-affiliated BAMPFA. Many of the works in the current show were among those he donated.

For all the appeal of pithy characterizations like “push-pull,” Hofmann’s painting defies any neat categorization of style or strategy. Organized chronologically, the exhibition underscores the relentlessly chameleonic nature of his work, which shifted from the biomorphic to the geometric and back again, often in a single year. Spanning from the almost Fauvist-style still life Apples (ca. 1934) to large, moody abstractions completed shortly before his death, in 1966, the show sets into relief these disparate approaches. Several works from the 1930s shed light on Hofmann’s evolving practice on these shores—its productive tussle between figuration and abstraction. With thin black outlines apportioning space in a post-Cubist alternation between volume and flatness, a still life from 1936 appears worlds away from Apples. In other still lifes from the 1930s, Hofmann earnestly availed himself of a representational premise to explore the dynamism of paint itself. Indeed, Clement Greenberg would later single out Atelier (Still Life, Table, and White Vase), 1938, as anticipating important aspects of Abstract Expressionism in the raw exuberance of its brushwork.

In the early 1940s—after briefly pursuing a tight-knit geometric faceting—Hofmann demonstrated a shift to such work, as revealed in the exhibition’s second gallery, where we find various canvases displaying the energy and gestural qualities that became hallmarks of action painting. Small drip paintings are shown alongside large-scale works like Effervescence (1944), in which paint and india ink congeal in mesmerizing pools of black, white, and pastel colors, and Cataclysm (Homage to Howard Putzel), 1945, which layers red blotches over a washed-out blue splatter traced with wispy red lines. At the same time, Idolatress (1944)—whose subject, with its moon-shaped head and spindly body, recalls that of Pollock’s Moon Woman (1942)—attests to Hofmann’s enduring dialogue with the figure, as does Exaltment (1947), which displays a vaguely figural network of spindly lines. Submerged (1947), meanwhile, accommodates not only organic forms and loops but also geometric cells and flat quadrants of pure color.

In short, any account of Hofmann’s methods must, in addition to “push” and “pull,” address the countless other techniques—the careful weighting and tracing, the dripping and splattering—that characterized his ever-changing experiments. A bit more contextual material in the show might have helped to articulate some of the transitions, particularly for those unfamiliar with Hofmann’s oscillating practice. Yet there is something exhilarating about the vagaries of his painting. As arresting as the faded burnt-sienna brushstrokes that compose Agrigento (1961) are the dark, brooding smears that dominate And out of the Caves the Night Threw a Handful of Pale Tumbling Pigeons into the Light (1964). In Hofmann’s last years, his pursuit of what he called “mystic light” found poignant juxtaposition with an exploration of portentous themes—a push and pull as affective as it is formal.

Feds May Have Enough Evidence to Charge Hunter Biden: Report

The Rock’s “Black Adam” Merch Has Arrived, New Releases From DC and Under Armour