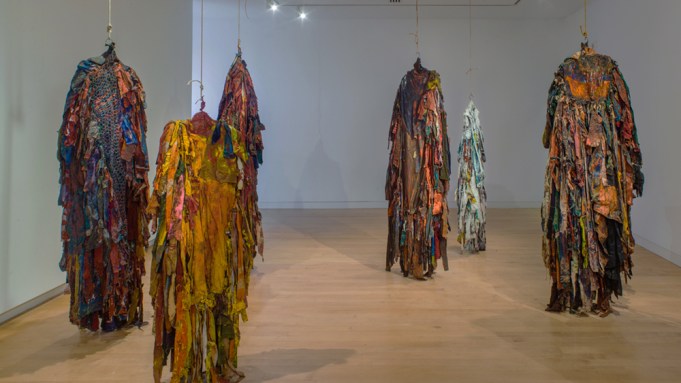 THIS FOCUSED, handsomely installed retrospective of Harmony Hammond’s work offers something of a corrective to perceptions of her career, which have often been dominated by the writing, teaching, and curating that have made her arguably the preeminent voice for lesbian artists during the post-Stonewall decades. After moving to New York from the Midwest in 1969, Hammond joined a storied consciousness-raising group, became an ardent feminist, and came out as a lesbian. She cofounded the all-women’s A.I.R. Gallery in 1972 and the Heresies Collective, which published the eponymous magazine from 1977 to 1993. In 1984 she relocated to Galisteo, New Mexico, where she has lived ever since. During the decades between her first solo exhibition, at A.I.R. in 1973, and this survey, she has curated landmark shows and written extensively on contemporary art, particularly feminist and lesbian art, having authored, for instance, Lesbian Art in America (2000), still the only book on the subject. In this exhibition, there is an alcove containing catalogues, books, and ephemera about and by the artist. Yet while Hammond considers that material to be essential to who she is as an artist, a visitor to “Harmony Hammond: Material Witness, Five Decades of Art” comes away with a much better sense of what surely fueled it all. The show testifies to Hammond’s status as a productive and rigorous maker who demonstrates a consistent knack for transforming the neutral forms of abstraction into corporeal metaphor.

In the early 1970s, Hammond—like many artists of the time—moved away from the male-dominant traditions of painting in which she was trained. Her materials were “rags”—her preferred nomenclature, as opposed to the tonier “textiles”—given to her by her friends or scavenged from the streets and bearing the history of their use. There were eight works called “Presences” in her first solo show; we see seven of them in an upstairs gallery here. Shaped vaguely like heavily draped female figures, they comprise bundles of miscellaneous dyed and acrylic-dipped rags (she called them “3D brushstrokes”) suspended from clothes hangers. They are a spooky crew, muted in palette and serious in tone. Also reunited for the first time since their debut, in 1974 at Nancy Hoffman Gallery, are five of six “Floorpieces”: colorful, concentrically braided rag rugs that Hammond deemed lesbian in content, “like kind touching and being woven together for strength.” She considered them to be paintings that, in being removed from the wall and placed on the floor, undermined hierarchies. They carry a whiff of Pattern and Decoration in their embodiment of women’s work.

Refocusing on actual paint, Hammond began to explore textures and patterns, working the medium like relief in her “Weave Paintings” (1973–77). She has often referred to the surfaces of her work as skin, and here her gouging and incising troubles a monochromatic layer to reveal colors underneath that resemble seeping blood or viscera. In Pink Weave (1974), Hammond created a messy but oddly elegant lattice by digging into oil and wax medium with the hard end of her brush. The lozenge-shaped Black Leaf (1976) presents a churning black surface with bits of red underpainting exposed. We see her carrying this principle into later works such as Sieve (1999), in which a rusty metal plate roughly punctured with sharp-edged holes is attached to canvas. It resembles a common kitchen grater—the kind you might scrape yourself on while shredding a potato—so that we almost wince in pain as we notice the thick red paint below, some of it oozing through the holes. It’s a small work, just 17 by 18½ inches, that has an outsize impact, and it is installed with a group of other effective modestly scaled selections. Among them are wall works composed of densely layered straw through which red paint and acrylic medium emerge, as if the traces of some bodily violence. In at least one series of works on paper, “Blood Journals (Giorno I–IX),” 1994, Hammond literalized her metaphor by incorporating, among other materials, actual menstrual blood.

Between 1977 and 1984 Hammond made what are perhaps her best-known works: the “Wrapped Sculptures,” in which she swathed wooden armatures in cloth and coated the results in rubber or latex. The massive, black rubberized Kong (1981), displayed in the museum’s front atrium, resembles a giant four-fingered hand emerging from the wall, a menacing presence that brings to mind the sculptures of Nancy Grossman, just as, upstairs, a tender pair of ladder-shaped forms wrapped in pinkish gold and dark green and leaned against the wall, Hug (1978), conjures Joseph Beuys. Again, Hammond evokes the feminine, calling the ladder duo her “mother and daughter piece.” Sometimes incongruously sprinkled with bits of glitter, the “Wrapped Sculptures” feel at once robust and vulnerable, and Hammond describes them as bodies, with the wooden structure as skeleton, the “fabric as muscle or flesh,” and the outer latex or rubber as skin.

Hammond’s most monumental and impressive work was to come, after her 1984 move to the Southwest, beginning with a group of assemblages incorporating the rusted, corrugated metal one sees in rural towns and urban barrios. From 2000 onward, her work took a rigorously abstract turn in monochromatic series combining textured fabrics such as burlap and old tatami mats she gathered from her aikido practice. Strips of grommeted fabric adhered to the surfaces, either gridded or crisscrossing, give many of these works a tense presence, as if they are strapped and belted. Grommets are also directly embedded, and laces and ropes might hang loose, as in Rib (2013), in which two ropes leave the canvas and coil on the floor below. Corsetlike components spanning the width of certain paintings in the show, such as Cinch 1 (2011–12), are laced up like bodices, but kept very flat and coated in the same uniform colors as the backgrounds, so that the works seem constricted both laterally and in terms of depth. With the recent, very large “Near Monochromes” and “Chenilles” hung in the biggest gallery, we feel that the bodily metaphor that Hammond has pursued over the course of five decades becomes most convincing. We stand close to the works, fascinated by their raw, textured surfaces, and then step away, to be swept into a vast scale, moving, as it were, from skin to landscape. It is a grand sweep, hard-won over time.