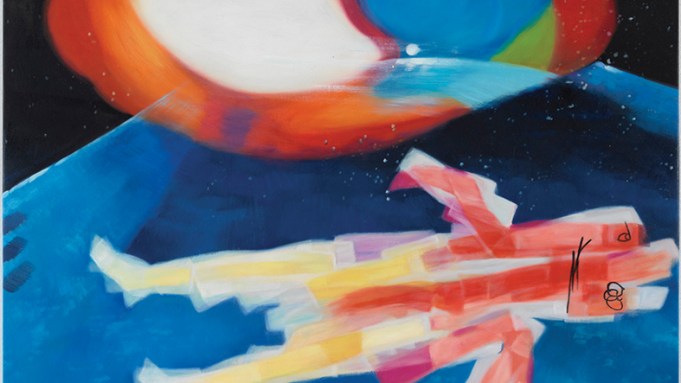 Value judgments bounce off the work of painter/director/writer/skateboarder Harmony Korine. Accusing him of nihilism or decadence is like arguing with yourself: his work embraces its faults so single-mindedly that they begin to seem like virtues. Though Korine’s talents as an image-maker are hard to deny, he can seem more canny craftsman than innovator, tightening his creations’ bolts and joints until they’re impervious to critical prodding.

In “Young Twitchy,” Gagosian’s exhibition of twenty recent paintings by the artist (all 2018), Korine reconfirmed his world-class knack for hedging. Though he’s dabbled in abstraction before, his latest works are mostly realistic oil-on-canvas interpretations of iPhone photographs he took while wandering around his neighborhood in Miami. The character for whom the exhibition is named—a creepy, crudely drawn little guy with the Pillsbury Doughboy’s body and a face like a power socket—first appeared in Korine’s grade school doodles. Decades later, Twitchy floats ghostlike through paintings of swimming pools and palm trees, incongruously smeared across the foreground like the skull in Holbein’s The Ambassadors. Indeed, you might interpret his presence as a kind of memento mori, undercutting Korine’s visions of haute bourgeois bliss. Or you might want to argue that Twitchy adds a dose of childlike innocence to the images, blessing the sunny swampland Korine calls home. Why not a little of both? Pretentious yet laid-back, digital yet analog, realistic yet semifantastical, new yet vintage: there’s something for everyone in these paintings.

Where others might see adventurousness in Korine’s all-inclusive approach, I find—and this might be strange to say about the filmmaker who brought us James Franco fellating a gun in Spring Breakers—something more like timidity. Unless you count Twitchy, there are no people in these bright, placid paintings. And yet Korine’s Miami is too bland and frictionless to qualify as eerily empty. Twitchy Tiles is one of the few works in which the brushstrokes have any energy or texture—appropriately so, since it was based on an iPhone photograph that Korine subjected to a generic “van Gogh” filter (I’ll admit that this is pretty funny). But most of the composition, particularly the bottom right-hand section, is a muddle, like van Gogh without the precision. More often—as in Twitchy Kodak Flack, to name one example—Korine’s paintings make you wonder if Gertrude Stein’s legendary line about Oakland was really about South Florida.

But might this lack of thereness not be the point? Had it not been for the paintings of Miami after dark in “Young Twitchy,” the exhibition could have been seen as a modest success—not the boldest show in town, but one that at least achieved what it set out to do. The nighttime paintings constitute an example of Korine clearly shooting for something and missing. Works like Twitchy Cosmic and Twitchy Paradise show every sign of the artist striving for a hypnotic, otherworldly tone, seeking pop-poetry in lens flares and twinkling stars. But their neon-on-neon color schemes register as heavy and graceless—qualities that, we come to see, are present in most of the works in this fitfully charming, ultimately wearying exhibition.

The Best Nespresso Pod Crowd Favorites to Keep You Caffeinated