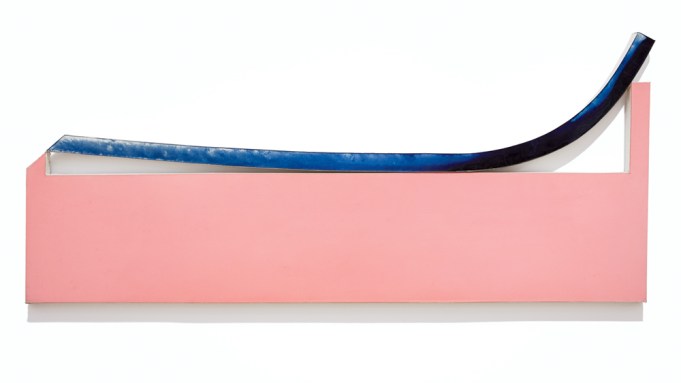 “CHANCE FAVORS the well-prepared mind.” This famous Louis Pasteur quote appeared in one of the notebooks displayed in the retrospective of Harvey Quaytman’s work at the Berkeley Art Museum and Pacific Film Archive. Quaytman’s paintings embody Pasteur’s paradox: although meticulously planned and executed, they project a strong sense of movement and discovery. The exhibition’s title, “Harvey Quaytman: Against the Static,” was drawn from an interview in which Quaytman described his work as a practice of rejecting stasis. “Against the Static” could equally be interpreted as a paean to his intense focus—his cutting out the noise in favor of a dedication to a very few concerns related to form and color.

Quaytman was born in Far Rockaway, Queens, in 1937, and was deeply rooted in the downtown New York scene beginning in the mid-1960s. He kept a studio at 231 Bowery until 1998 (the building is now New Museum property) and showed with Paula Cooper in the late 1960s and ’70s. He had several midcareer museum exhibitions, but the Berkeley survey was the first significant presentation of his work since his death, in 2002. Curated by the museum’s Apsara DiQuinzio, it articulated the evolution of his practice over four decades, showing how each body of work responded aesthetically to the previous one.

The earliest paintings on view, such as Riley Mumbling to Himself at Night (1961–63) and Studio Still Life (London), 1962, featured loose, gestural forms and jagged puzzle-piece shapes in compositions recalling Willem de Kooning’s paintings from the late 1940s and early ’50s. By the late 1960s, Quaytman was applying his formal experimentation to shaping the canvases themselves. Influenced by calligraphic letterforms, Pearls Before Pencils (1969) combines a brown-painted L-shaped piece and a long pink diagonal through an elegant transition suggesting an overturn stroke. Similar brief but charged encounters occur throughout Quaytman’s work, especially in a subsequent series in which large canvases shaped like upturned brackets serve as bases for delicately curved linear pieces. Quaytman fashioned the stretcher bars for the curved components using plywood that he scored, steamed, and bent in a process recalling that of bentwood furniture. (The artist, in fact, referred to Michael Thonet, the nineteenth-century German-Austrian furniture maker known for bentwood work, in the title of a painting he made just prior to this series, M. Thonnet’s Tonic, 1968–69.) Rather than resembling furniture, however, these works are drawings made three-dimensional. In Little Egypt (1969), a midnight-blue curve appears atop a monumental pink base. At left, the two components meet to form a continuous diagonal. But on the right side of the work, the blue piece extends upward beyond the pink support, like a drawn line that went too far.

Quaytman skillfully translated the energy of preparatory sketches to large-scale proportions in these works. The resultant paintings retain the small moments where inconsistencies arise and balance is subtly disturbed when one draws by hand. In other words, Quaytman imported the personal aspect of the drawing process to the often impersonal world of geometric abstraction and, given the large scale of the paintings, cast the irregularities as heroic. Frank Stella, pioneer of the shaped canvas, warned that abstraction, especially as practiced by Kandinsky and Mondrian, can lack “human dynamics.” Quaytman’s work, however, is full of humanity.

In a following series that became known as the “rocker” paintings, Quaytman inverted the equation of the prior work by positioning large canvases atop attenuated ones. Here, rectangles with curved bottoms sit on shallow ledgelike forms. One might picture the former tilting back and forth on the latter like rocking chairs. The skewed rectangles also suggest a kind of sagging, as if they are distended by their own weight. Quaytman reintroduced brushwork to his painting in this series. After applying the acrylic adhesive Rhoplex to the canvases and adding powdered pigment, he dragged wallpaper brushes across the surfaces, creating wide strokes. The multiple layers of color in the weird, craggy surfaces that emerged vie for primacy. In Araras (1973), for instance, bright yellow and blue alternately come to the fore.

Quaytman’s later paintings provoke a more frenetic sense of visual movement. While the earlier works emphasized one or two sites of action—places where the shapes interacted in dynamic ways—the cruciform paintings of the 1980s and ’90s exhibit an allover instability. Although many of them are square and feature centralized crosses, Quaytman disrupts the symmetry that those characteristics offer. In Spanish Picture (1987), a rust-colored cross overlays a largely matte-black ground, dividing the composition into quadrants. Two glossy black vertical rectangles, however, are sandwiched between the cross and the ground, at the composition’s center-left and right. While trying to take in the figure of the cross, I find myself struck with the sense that something moved, and anxiously look from one shape to another to determine what it was. This picture will not stay still.

In a 1998 interview, Quaytman addressed the question of meaning in his work. He said, “My paintings mean to me my victory, inch by inch and year by year, over the arbitrary chaos of visual life. I have slowly taken command of a way of ordering my composition so that with the slightest shift of shaped colored areas I can break symmetry or stasis or even death. My meaning resides in my own victory over the inert.” The sheer optimism and confidence of this statement is breathtaking. Quaytman’s enduring commitments—to shape and line, to seemingly incidental marks or irregularities of form—stood out above all else in this exhibition. Walking through the galleries, one felt the enormity of his project and also its unqualified success. Quaytman, in his paintings, indeed emerged victorious.

The NCAA Must Go Bigger to Hold the Attention of Congress