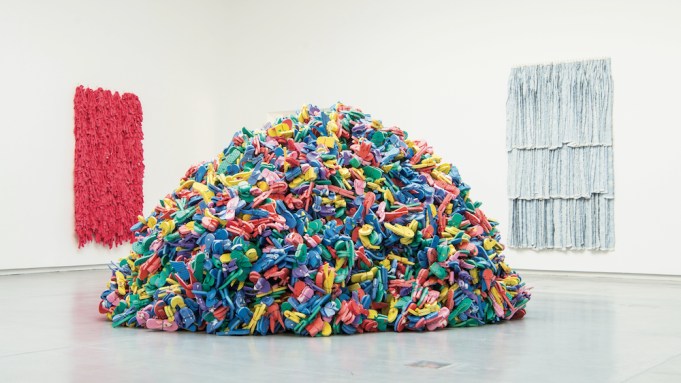 Among the most affecting pieces in this retrospective of work by Emirati conceptualist Hassan Sharif (1951–2016) was Images on Tracing Paper (2015), a simple book of drawings on translucent paper bound with cardboard and sewn together by hand with brightly colored thread. It is one of the artist’s last pieces, completed while he was in the hospital undergoing chemotherapy. Filled with abstract scribbles and illustrations of objects like bicycles and cooking utensils, the book conjures an affecting picture of an artist so dedicated to his practice that he continued working until his last moments.

With its shaky renderings and loose stitching, Images on Tracing Paper invites reverence, appearing like a modest relic by an artist with a mythical reputation in the United Arab Emirates. But the actual history is more complicated. Sharif’s last work was, in fact, the gargantuan Colors (2016), a jubilant wall hanging comprising tiered rows of colored strings. A tension between history and hagiography was evident in this landmark survey of Sharif’s prolific career. Covering more than forty years, the massive show demanded repeat viewings, with over three hundred works as well as supplementary archival material. Selections spanned from the artist’s earliest days working as a satirical newspaper caricaturist in Dubai (criticizing those in power was eminently possible in the freer media climate of the 1970s) through the assemblage sculptures composed of commonplace objects for which he is best known internationally.

The exhibition was curated by Sharjah Art Foundation president and director Sheikha Hoor al Qasimi, who organized the presentation thematically, with small clusters of galleries corresponding to Sharif’s aphorisms, such as “I am an object maker” and “I am loyal to colour.” Until about a decade ago, Sharif scarcely appeared in official histories of the UAE. But as the country’s cultural ambitions have grown—as evidenced, for example, by the Sharjah Biennial—it has since become politically and commercially expedient for the UAE’s art scene to have an origin story. Thus, Sharif has frequently been referred to as the father or grandfather of contemporary art in the Emirates—labels he himself rejected. (“Professor” might be more appropriate: a full-scale re-creation of Sharif’s atelier served to remind viewers that he taught some of the UAE’s most important artists, among them Mohammed Kazem and Abdullah Al Saadi.)

The show was most compelling in its presentation of Sharif’s earliest experiments in Conceptualism. Particularly remarkable were the 1980s Fluxus-like performances he realized following his formal art education in London. Photographs, films, and performance scores from this period showed him drawing on walls, long-jumping, and counting cars on the streets of Dubai, or throwing rocks in the desert. These works embodied both the playful spirit evident throughout Sharif’s career and his fascination with repetition and sequence, or what he called “semi-systems.”

Especially exciting was the 1985 installation Central Market Sharjah—partially re-created for the show and represented by photo-documentation—in which Sharif arranged a number of quotidian objects (plastic water bottles, knotted plastic bags, and painted panels that resemble crossword puzzles) on the sidewalk outside the Blue Souq, a large market building within walking distance of the Sharjah Art Foundation. Bringing art into public space in this way was a radically democratizing move. So, too, was Sharif’s repurposing of the junky detritus for the sculptures he began producing in the 1990s. Rubber flip-flops, cheap plastic household goods, snack packaging, tools, electronic refuse, and assorted industrial bric-a-brac were among the materials with which he created bulky mounds or ebullient wall hangings. Intended as critiques of the rampant commercialization that swept the UAE following the oil boom, these works read today as a kind of material archaeology of the country. At a time when the Emirates are synonymous with conspicuous consumption, the simple consumer goods in Sharif’s work indicate an engagement with the reality of the country—not just its constructed image.

Yet, despite media portrayals, the UAE still very much depends on the trade of such basic goods. Younger generations of artists here have tended to elide this still-present condition in favor of responding to the romanticized Bedouin past promoted by the country’s leaders or a sexed-up notion of Gulf Futurism. Sharif, however, remained an artist of the present and the everyday. This exhibition had been in the works for several years—its opening was held off until after the artist’s passing last fall, at his request—and it felt like an official obituary. The grand scale of the show could be achieved only with substantial resources and government backing. It was hard to shake the feeling that this was too much, too soon, but perhaps we’re all the richer for it.