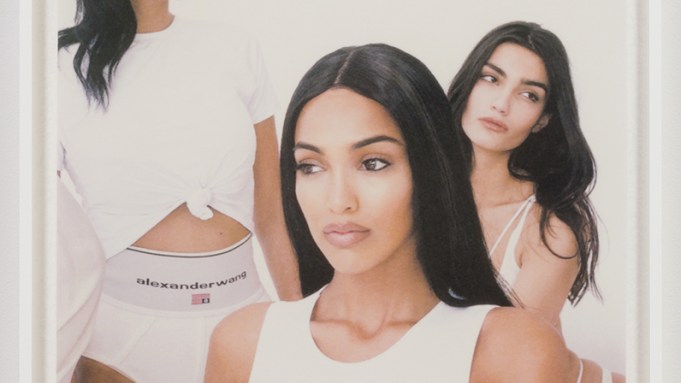 Heji Shin’s exhibition at Gaga & Reena Spaulings Los Angeles, “Angel Energy,” pushed deeper into the themes of birth, beauty, and celebrity that she explored in her controversial mural-size portraits of Kanye West in 2018 and her gorgeously gory 2016 photographs of crowning babies. In a series of five composited images, “Angel Energy 1–5” (all works 2019), Shin places photos of human infants at the digitally rendered breast of Jedy Vales—a computer-generated “brand ambassador” for the website YouPorn that has been designed as a compilation of users’ most-searched-for traits. In Shin’s prints, she appears in several different guises, all white-presenting: in one, she has a long magenta ponytail and ice-blue eyes; in another, watery green irises and a perfectly bald head. There are even slight variations in her nipples. Vales is, in other words, a malleable fantasy of a narrow kind, representing a statistical mean of desirability. The babies are an ironic addition, turning her into a packaged brand of womanhood.

In the exhibition, the “Kardashians” duck-lipping in their underwear were actors, but the uncomfortable fact is that Shin has access to the real ones. To make another series of works on view, Shin peeled apart Polaroids of the actual Kardashians that she took while photographing them for CR Fashion Book, and printed the ruined film on polished metal panels, titling each print with the first name of its subject. The results recall the formal distortion of Warhol’s bespoke celebrity silkscreens: one shows a high-contrast image of Kris Jenner—Kardashian matriarch—on the phone wearing sunglasses, the contours of her face and hands outlined in bright red; in another, a dark purplish abstraction is all that remains of Kylie, the youngest daughter. These authentic pictures are also, teasingly, the least legible in the show.

The ever-visible Kardashians, whose surgically and digitally filtered features have launched a million selfies, may not seem like a radical subject. Yet Shin introduces their profane version of celebrity into an art world still defensive (whether its members admit it or not) about the meaning of “fine art.” You know commerce, like pornography, when you see it. Shin’s ambivalence about the line between commercial work and artwork—a crude allegory of fake and real, image and flesh—continues to provoke her viewers. Two big mural prints anchored the show. In Fake-riarchy, the whole faux-Kardashian clan looks dead at the lens, while “Kim” poses solo in You Killed This, giving the viewer her back (and infamous butt). She’s facing out the window of a warehouse space, maybe in LA, maybe anywhere, taking a photo on her phone. It doesn’t matter if Kim meets your gaze or not; it doesn’t matter if she’s actually Kim. As with the Kardashians, even Shin’s haters can’t resist having a look.

The 2022 Ducati Giro Alpino in Photos

Intermix Said to Have a Buyer: Regent L.P.