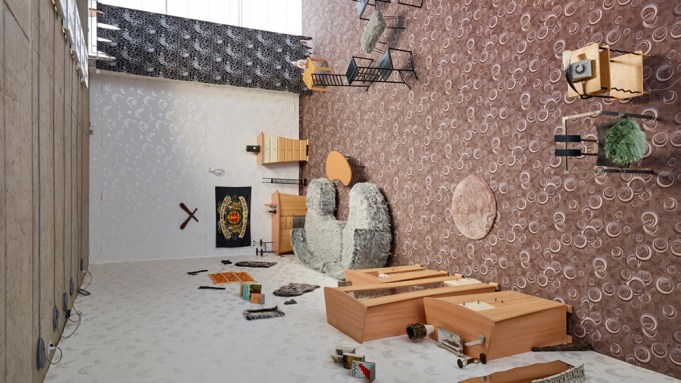 A pair of black platform heels and a gas mask were among the objects greeting visitors to Henrike Naumann’s three-floor exhibition at KOW, “Ostalgie.” The room was filled with nearly empty mauve-colored shelving units salvaged from a shoe store that was located in the 1990s in Brandenburg, which, before Germany’s reunification, had been part of the German Democratic Republic, aka East Germany. Among the footage playing on a dated monitor in Naumann’s installation were sequences showing dancing blonde girls with gas masks superimposed on their heads. Naumann stated in an interview that she intends these young women to evoke ’90s East German ravers. In the exhibition, the artist—herself an East German kid when the wall fell—offered a series of installations that used ’80s and ’90s furniture and objects from the former East Germany to articulate how the abrupt transition to capitalism impacted everyday life. This opening installation, Die Monotonie des Yeah Yeah Yeah (Eastie Girls) (The Monotony of the Yeah Yeah Yeah [Eastie Girls], 2018), juxtaposed two kinds of responses to the trauma of reunification among Eastie youth: queer techno raves and neo-Nazi extremism.

The exhibition’s title, a portmanteau of the German words for “East” (ost) and “nostalgia” (Nostalgie), refers to the romanticized views of life in the GDR that proliferated after reunification, a means of mourning the loss of socialist collectivity and culture. Fittingly, the show was the last one KOW held in this central Berlin building before it was pushed out by rising rents. On the city’s East side, you can still find some nearly empty stores resembling Naumann’s simulacrum. Staffed sporadically, these stores are left over from a context in which space and time needn’t be maximized for profit—and in which there were simply fewer commodities to be had. Many of the objects in the exhibition emulated Western postmodernist trends that were already dated by the time the items were made, reflecting the naive “bad taste” of a population suddenly introduced to capitalist variety. By mingling the fancy and the flimsy, luxury furnishings and cheap copies, the installations also reflected the emergence of class distinctions at this time.

A sign that read west in the style of a dated corporate logo led visitors downstairs to Ostalgie (Urgesellschaft) (Ostalgie [Primitive Society]), 2019, a living room setup combining furniture from the final years of the GDR and “prehistoric” elements, including animal print rugs and faux-wood clubs. The room was tilted on its side, with wall furnishings (bookshelves, a framed portrait) placed on the gallery floor, and typically floor-based furnishings (a carpet, a couch) affixed to the wall. Along the staircase, GDR-era school posters framed by plastic bones introduced Marx’s concept of history as a linear progression from the Urgesellschaft referred to in the installation’s title toward communist utopia. Throughout the exhibition, Naumann played with this conception, creating spaces that mixed Nazi lineages and ecstatic rave culture, the Stone Age and the GDR, to refute simplistic characterizations of the East before and after reunification.

Naumann was trained in set design, and each object in her installations seemed precisely selected for its cultural associations. Take, for instance, the animal horn with which she replaced a rotary phone’s receiver in Ostalgie (Urgesellschaft), a nod to the stereotype of East Germans as so backward they didn’t even have telephones. In an installation on the gallery’s bottom floor, Fun 2000 (2018), empty CD towers evoked the sudden availability of previously censored media into the East in the ’90s. These references may have been more legible to German audiences than international ones, to Ossis than Wessis, to millennials than Generation Z. But even viewers less literate in this history would have caught the absurdity of the throw pillow printed with a portrait of Karl Marx and placed atop a white shag throw—the sort of clash the artist has described as the “aesthetic of reunification.” “Capitalism destroyed my culture and all I got was this lousy stuff,” Naumann’s exhibition seemed to say.