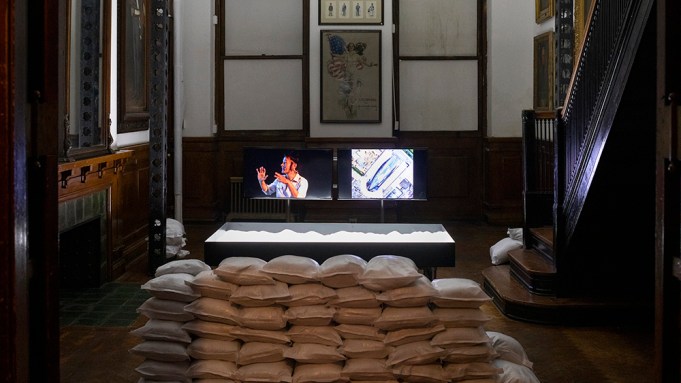 When you hear a reference to “the Armory” or “the Arsenale,” are you more likely to think of an exhibition space, an art fair, a biennale—or a militarized building constructed to house a stockpile of weapons? In her exhibition “Drill,” on view through July 21 at the Park Avenue Armory in New York, Hito Steyerl reminds us that the two are often one and the same. Spread throughout the Armory’s ground floor, the exhibition includes a selection of works from 2013 to the present, which commingle with the building’s Gilded Age interiors.

The centerpiece of the exhibition is Drill, a newly commissioned three-channel video installation installed in the vast Drill Hall that uses the history of the Park Avenue Armory site to explore the relationship between art and arms. Completed in 1880, the Armory was originally built as the headquarters for the Seventh Regiment of the New York militia, which included many of Manhattan’s wealthiest men. Seventh Regiment members were among the founders of the National Rifle Association (NRA), originally an organization devoted to improving marksmanship and today the leading force against gun control legislation. Occupying an entire city block, it was built entirely with private funds from these Manhattan elites, representing the same class of powerful patrons responsible for the contemporaneous establishment of institutions like the Metropolitan Museum of Art and the Museum of Fine Arts, Boston.

In the video, historian Anna Duensing gives visitors a virtual tour of the Armory. The basement—shown in Steyerl’s video, but not accessible to the public—was once a shooting range. Its walls are still riddled with bullet holes, the lead from which, we are told, poisoned the water in the building. The Armory also served as a meeting place for regiment members and held formal functions like balls. The tour is interwoven with stories from survivors of mass shootings across the United States. They weigh in on the persistence of violence and inequality against a soundtrack that translates statistics on gun violence into pitches and beats. Kareem Nelson of the nonprofit Wheelchairs Against Guns explains that guns are easily accessible in his community while bullets are harder to find, suggesting that tighter ammunition regulation could be instrumental in decreasing gun violence. Familiar faces from the news also make appearances, such as Nurah Abdulhaqq of National Die-In and Emma Gonzáles of March for Our Lives.

Because Steyerl’s arguments are unsurprising and easy to agree with, I’m left with questions about what the art is doing that journalism and criticism don’t or can’t. One important difference between art and journalism is that art doesn’t get fact-checked. Steyerl flexibly uses the documentary genre, as well as mediums she has called “fucking didactic,” among them essays and lectures. As an artist, she is given considerable leeway, though I myself wished there had been a few more footnotes supporting the grand claims in her 2017 book Duty Free Art: Art in the Age of Planetary Civil War. When, for instance, she described “neurocurating” as “paintings [that] will surveil their audience via facial recognition and eye tracking to check whether the paintings are popular enough or whether anyone is behaving suspiciously,” I was unsure if it was a speculation or a warning against something currently in development.

Steyerl’s lack of evidence is more easily obscured in her artworks. In Is the Museum a Battlefield? (2013), a recorded lecture and set of slides are combined to make a two-channel video installation on view at the Armory, Steyerl presents a Frank Gehry building in Berlin, claiming that it’s the headquarters for Lockheed Martin, an aerospace and defense company. She describes how the form of the building mimics that of the missiles the company produces, and suggests that this is because Gehry and Lockheed Martin each use a “version of the same software” for 3D modeling. After being gripped and persuaded by Drill, I wanted to interpret this as farce, a performance of conspiratorial connections, since that building was commissioned by DZ Bank and serves as its headquarters. It’s also modeled after a horse’s head, not a missile, and Gehry has made countless other shapes using the “software” that Steyerl doesn’t name, but which must be Digital Project, the CAD software Gehry’s company developed.

The viewers next to me, seated atop sandbags that Steyerl placed in the Armory’s parlor, were engrossed and convinced: Steyerl performs as an authority figure, providing seductive and convincingly connected visuals. I came to the show already in agreement with her conclusions: that art is complicit in structures of violence and abuses of power, which are utterly propelled by corporate greed. But in an era of dangerously proliferating fake news, employing didactic forms to proffer untruths is irresponsible, and we should diligently discern whether expertise is merely performed.

Steyerl is much loved by critics, in part because her work is modeled after criticism, comprising pointed arguments that rely heavily on language and evidence. She also deftly engages the very mediums she critiques, one of the most successful examples is How Not to Be Seen: A Fucking Didactic Educational .MOV File (2013). This video employs the digital image in order to show us how the US Air Force calibrates its aerial surveillance of the Earth at the pixel level, highlighting the power dynamics embedded within the medium itself. But this method is weaker in Is the Museum a Battlefield?, where the artist stretches to make the already tenuous connection between missiles and starchitecture a problem of digital software.

Drill’s greatest merit is its site-specificity, which offers a counterweight to the “duty-free art” she critiques in her book: art treated as an asset to be shipped anywhere. The video files could be transmitted across borders with the click of a button. But at context of the Armory, the work asks viewers to look around their surroundings for hidden stories of violence and power: not over there, but right here. And if here, then anywhere. Contrast this situatedness with works like Hell Yeah We Fuck Die (2016) or Robots Today (2016), also on view, which comprise IKEA-esque modular structures that can be tailored to any site, spatially and conceptually. In the past couple of years, I’ve seen these two works configured variously across the globe.

Drill resists the easy sharing of the digital file, and highlights a timely and disturbing issue. For these reasons, I understand the fanfare around Steyerl. But the tendency to uncritically accept her claims disservice to artists and viewers alike. Steyerl’s work and its reception should remind us of the dangerous seductiveness of authority, which we’re especially susceptible to when it confirms our beliefs.

At This London Restaurant, a Server With ‘Gorgeous Hands’ Will Feed You Grapes

The Eclectic Sounds Blooming in the Dominican Republic’s Indie Scene