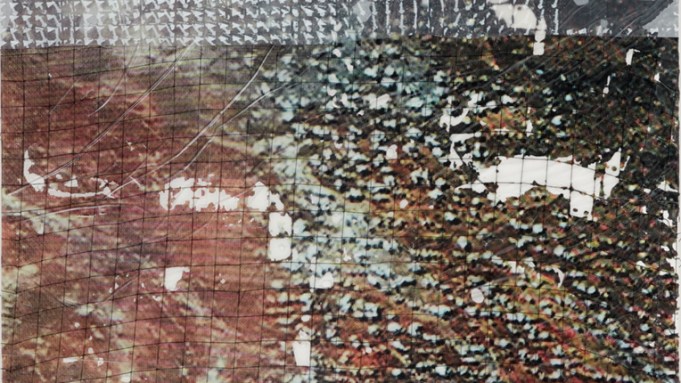 Is it ironic, or simply appropriate, that Hugh Scott-Douglas, an artist whose work has often taken up the flows of twenty-first-century capital as its theme, is the poster child for the vagaries of art’s financialization? In 2014, dealer Niels Kantor paid $100,000 for one of Scott-Douglas’s “Cyanotype” paintings—hazy blue-and-white grids made by exposing film printed with algorithmically generated patterns onto canvas—intending to flip the twentysomething artist’s work for a quick profit. But it turned out the market for Scott-Douglas and his ilk, whose riffs on the tradition of modernist abstraction with cerebral and/or gimmicky process-based twists were assigned the fatally catchy moniker “zombie formalism” by the critic Walter Robinson, had already started to cool. Two years later, having desperately attempted and failed to recoup his investment—he even tried to hawk the painting on eBay—Kantor gave a scorched-earth interview to Bloomberg News in which he compared the artist to “a stock that crashed.”

Normally, I’d consider it a little unseemly to begin a review by dwelling on the gory details of an artist’s sales history. But walking through “Spare the Wrench” at Casey Kaplan—Scott-Douglas’s seventeenth commercial solo show since receiving his BFA in 2010—I couldn’t shake the sense that the body of work on view seemed at once too self-aware about its own status as a commodity and not enough. The eight untitled canvases (all 2019) are the newest iteration of Scott-Douglas’s series “Trade Winds,” begun in 2016, for which he digitally edits screenshots displaying the shipping industry software FleetMon, which tracks commercial sea routes, to isolate the “graphemes” representing wind, current, and wave conditions. The results, printed on canvas, are inscrutable maps made up of dense, patterned layers of arrows and triangles.

In these new works, the process has become more byzantine, but not to significantly different ends: instead of printing the digital images directly, as in the earlier “Trade Winds” works, Scott-Douglas beamed them to a television monitor and scanned its screen as an intermediary step, after which, according to the exhibition materials, “visual effects that can be achieved through Photoshop [were] pursued manually.” In other words, the artist made his hand conspicuous by manipulating the printed canvas. He selectively abraded the images, added messy layers of resin and enamel, and pulled lengths of avian netting over the surfaces to produce an effect that recalls the warped grids of map projections. The works have an air of calculated imperfection, like artfully ripped designer denim.

The exhibition’s title alludes to “monkeywrenching,” a term used by eco-activists to refer to the strategic sabotage of environmentally destructive entities (for instance, cutting commercial fishing nets, or “spiking” trees with large nails that damage logging equipment). But Scott-Douglas’s version of monkeywrenching is formal, not political. We are told that the paintings take images produced in the service of logistical efficiency and render them illegible, as a means of symbolically intervening in the circulation of goods and services. But what these works actually do is treat data as decoration: they look like information without conveying any. Swap out ships for trucks, or foot traffic at an Amazon distribution center, or US Postal Service routes, or ski runs in Aspen and little would change except the press release. In the end, it doesn’t matter. As Scott-Douglas surely knows, his pictorial wrench in the system doesn’t disrupt anything at all. Nor, I suspect, is it really meant to.

This article appears under the title “Hugh Scott-Douglas” in the February 2020 issue, p. 86.