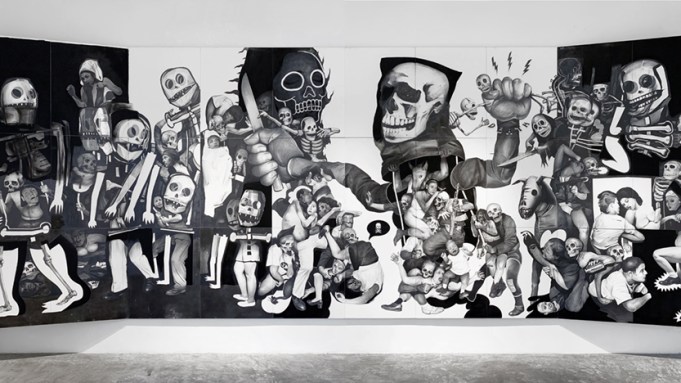 The National Portrait Gallery in Washington, D.C., named Hugo Crosthwaite the 2019 winner of the Outwin Boochever Portrait Competition, an astute selection for several reasons. Crosthwaite’s entry, a meditative, three-minute stop-motion animation about a woman migrating from Mexico to the United States, stretched the conventional bounds of portraiture and affirmed the genre’s relevance, both of which are aims of the prize. Over nearly two decades, Crosthwaite has applied portraiture’s concentrated attention not only to individuals but even more avidly to place. His most constant subject, his inexhaustible muse, has been Tijuana, the vibrant, complicated city of his birth. He lives and works now between San Diego, to the north, and Rosarito, Mexico, to the south.

Crosthwaite’s exhibition at Luis De Jesus Los Angeles included an engrossing array of paintings, drawings, and animations he has made since 2010, all of them anchored in the fertile disjunctions of Tijuana’s social and physical landscape. Compressing the witnessed and the imagined into a quotidian surreality, à la Goya, he interweaves exquisite naturalism, punchy graphics, and noirish atmospherics in compositions that employ a tool kit of delicate pencil lines, gray washes, opaque black fields, and exposed white grounds. He fuses the tender, playful, audacious, and grotesque, casting death as ever present in the tragicomedy of life.

The thirty-panel, twenty-five-foot-wide Death March (2010–11) represented a riotous procession of bodies and bones—James Ensor meets José Guadalupe Posada—in graphite, charcoal, and acrylic on museum board. This work faced a series of intimately scaled ink drawings rendering daily life in Tijuana as a matter of speculative fiction. In several compositions on canvas in an adjacent gallery, translucent streaks of paint acted like highlighter marks to intensify passages in graphite and ink depicting entangled and variously compromised and threatened figures. When Crosthwaite tweaks spatial logic, contorting bodies and the physical environment into impossible adjacencies and breakages, it reads as an undermining of the presumption of societal order. A final gallery housed multipanel pieces showing scenes of vernacular street life—motels, taco stands, carnival rides—augmented with comics-style overlays and spiked with found poetry in the form of fragmented signs.

Crosthwaite’s smallest pieces feel just as immersive as the wall-spanning work, and his drawings no less dynamic than a set of four roughly five-minute animations that looped on separate screens at the heart of the show. Crosthwaite has made numerous murals in public settings, and these animations vividly capture that same process of imagery emerging live. In the videos, ink drawings for his unbound volumes called “Tijuana Bibles” (two were on display here in a vitrine) materialize via an unseen hand, charged narratives unspooling in time and backed by a soundtrack of the urban everyday—car horns, church bells, crying babies, laughter. In one sequence, a head appears, then its body, on the ground, hands twisted back unnaturally. A gun shows up by its side. Blood seeps from the corpse, spreading into a shroud of darkness. Fueled by Crosthwaite’s moral dismay (Trump appears in one hilariously carnivalesque scene) and fascination with carnality, violence, and displaced power, these nearly wordless texts on Tijuana serve as a new kind of bible—foundational but fluid, reverential but critical.

Rita Ora Performs ‘You Only Love Me,’ Talks Marriage and New Album on ‘Fallon’