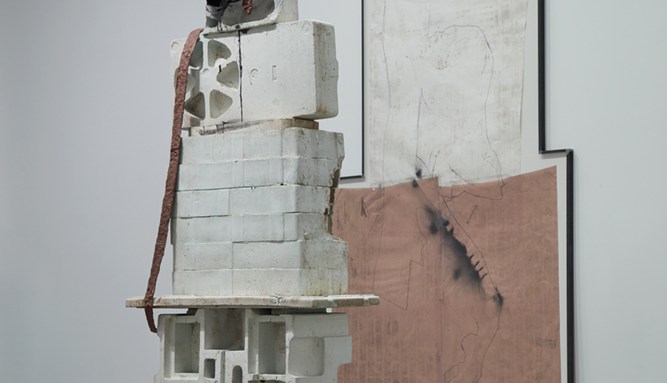 A cast bronze sculpture of a commanding figure enthroned like an Egyptian pharaoh greeted visitors to Huma Bhabha’s midcareer survey, “They Live.” The figure’s body—originally modeled in chicken wire, polystyrene foam packing blocks, and wood—had a damaged, incomplete look to it, while the bronze gave it an aura of enduring power. The sculpture was pointedly titled The Orientalist, after Edward Said’s famous study of the West’s construction of the “Orient” as its brutal, decadent other, “a sort of surrogate and underground self,” and was one of many zombie kings and gods portrayed in the show. These were at once monsters—distortions of the Western imaginary—and evocations of real-life rulers. Throughout her work, Bhabha, who was born in Pakistan in 1962 but has lived in the United States since 1981, offers a complex take on the trauma of colonialism.

Bhabha’s sculptural bodies collapse the political and imaginary, the historical and futuristic, the mortal and iconic. The exhibition’s earliest works were six masks from the mid-1990s channeling aliens and monsters from popular culture (“Star Trek” and the Mortal Kombat video game were cited in the wall text). The masks were displayed in a row on the wall like terrifying trophies: in one, red tubes penetrate the mouth, nose, and eyes of a faux bear head; in another, skin hangs loosely from a humanoid head, the orifices bloody and gaping. These works speak to social realities as much as fiction: Bhabha noticed that aliens and monsters depicted in Hollywood movies and beyond appropriate features from the masks of colonized cultures.

In the next gallery, standing figures referenced Archaic Greek kouroi: rigid, idealized memorials for male youths. From the front, Tupac Amaru (2010) is an assemblage of polystyrene foam blocks, with ribs and facial features crudely scrawled and sprayed on the surface. The rear is a tangle of chicken wire, clay, wood, and seedpods, with a phallic, daggerlike horn as a tail. The sculpture is named after the last Indigenous monarch of the Inca empire, who resisted the Spanish invaders. Bhabha’s impoverished materials themselves become a form of refusal: we are given polystyrene foam, a marked contrast to the gold that drove Spanish conquest.

Such explorations of power exercised through brute force and cultural appropriation set the stage for the exhibition’s poetic center, the colossal Benaam (2018), whose title means “nameless” in Urdu. This sculpture, which was commissioned by the Metropolitan Museum of Art for its series of rooftop presentations, portrays a kneeling supplicant with huge, elongated hands stretching forth from a body shrouded in black material and with a tail protruding at the back. The hands and tail appear to be made of crumbling clay, but the entire piece is cast bronze, painted to imitate fragile, quotidian materials. Bhabha, who compares the black shroud to a body bag, says that the work is at once a “monument to unnamed victims of war” and a “cocoon with the potential of rebirth.”

Nine monumental totems populated the final gallery, all but one of them carved from a combination of cork and foam. Garish fluorescent colors are applied to the totems’ masklike faces and bodies. Some of the works, like Castle of the Daughter (2016), have gaping-mouthed visages that conjure Basquiat’s horror-stricken skulls, while others, such as Waiting for Another Game (2018), resemble Tiki bar decor. The cork and foam are grafted together to create strange hybrids of the organic and the artificial; both materials are buoyant and impermeable and will crumble with age, leaving no lasting form. A single totem, Constantium (2014), is rendered in bronze. It will endure, like the trauma that haunts Bhabha’s figures.