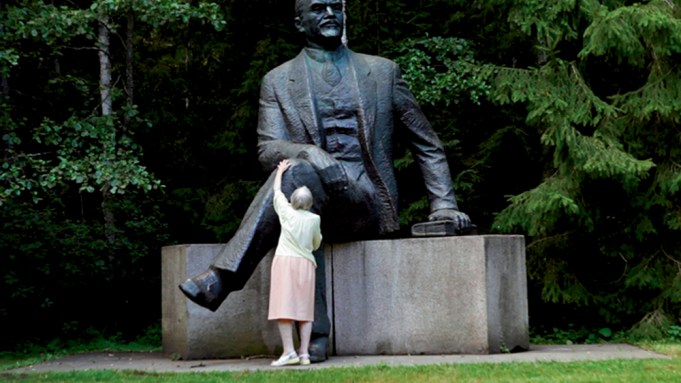 Monuments, in their scale, installation, and materials, generally prescribe our body’s encounter with them. Whether an outsize bronze figure compelling us to crane our necks upward or an inscribed wall redirecting our path of movement, these objects require our bodies to adjust to them. That is partly why the toppling or removal of monuments translates into such a powerful visual; we might see, for instance, people standing astride forms that once diminished them. Such inversion—as with the recent removal of statues enshrining the Confederacy across the United States—also forcefully conveys a striking down of the ideologies, politics, and painful histories that monuments can embody.

The group exhibition “If These Stones Could Sing” featured works, by five artists and one collective, from various countries, that foregrounded touch as a means of engaging questions concerning what monuments mean. The first thing I encountered in the show was an absence. In the gallery’s front room, drag marks and scuffs left on the floor were the only indications that Public Movement had performed their 2015 work Falling Wall at the exhibition’s opening. In this four-minute choreographed piece, a freestanding wall falls to the ground behind three performers, who, wearing starched white costumes reminiscent of a yacht crew’s uniforms, conduct ritualized movements suggestive of foot drills. Although I didn’t see the performance, the exhibition brochure included three photographs of an earlier staging of the piece that captured the violence of the wall’s impact, its narrow miss of the performers.

Hung on the walls enclosing a ramp leading down to the second gallery were two photographs by Shitamachi Motoyuki of derelict Shinto torii gates on islands once occupied by Japan. These former symbols of military might—one (on Russia’s Sakhalin) overgrown with vegetation and the other (on Saipan, one of the Northern Marianas) used as a bench by park-goers—have receded into the landscapes they once claimed sovereignty over.

Arriving in the darkened second gallery felt like entering a crypt. Here, in an especially thoughtful touch by curator Marie Martraire, three videos were projected on angled white slab/screens that recalled the fallen barrier in the Public Movement piece. Shot in London’s Highgate Cemetery, Milena Bonilla’s time-lapsed five-minute Stone Deaf (2009) places viewers almost at eye level with ants, wasps, and a lowly snail that traverse the broken stone plaque indicating where Karl Marx’s remains were buried before they were moved, at the urging of the British Communist Party, to a more prominent location in the graveyard. Another video in the trio was Sriwhana Spong’s Beach Study (2012), which comprises footage—transferred from 16mm film and shot through colored filters—of the artist dancing across the desolate terrain of a formerly public and now private beach. While the video was beautiful, it paled in comparison to the third: Emilija Škarnulytė’s Aldona (2013), which shows the artist’s grandmother Aldona taking her daily walk through Lithuania’s Grūtas Park.

Privately owned, Grūtas features nearly a hundred Soviet-era monuments culled from around the country, preserving—not without controversy—remains of the former regime. For Aldona, who we gradually realize is visually impaired, these larger-than-life friezes, busts, and statues are as much signposts on a path she now knows by sense memory as they are markers of the turbulent history she survived. Škarnulytė’s stunning camerawork sometimes portrays comic discrepancies of scale between Aldona and the monuments, and other times hews closely to the carved and polished surfaces the elderly woman caresses by hand. This beautiful portrait ends not amid the ruins of the past but on a somewhat idyllic note, with Aldona setting out to compost apple peels under a tree.