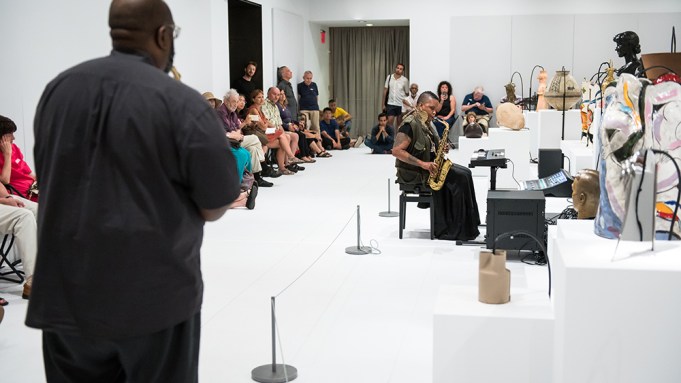 Artist Oliver Beer’s Vessel Orchestra stands as a noteworthy new milestone for the Metropolitan Museum of Art, marking its first ever commission of a sound installation. ForVessel Orchestra, on view at the Met Breuer though August 11, Beer has culled thirty-two hollow vases, busts, sculptures, and jars from the Met’s vast collection, selecting items for their resonant frequencies: the pitches at which, by virtue of their shape and volume, these vessels are inclined to resound. Filtered from the surrounding air, these pitches are normally present but only faintly perceptible unless sympathetically activated or amplified—a phenomenon familiar to most from the conch shell’s shaping of sea breeze. Beer examined hundreds of items in his search for vessels that resonate along the chromatic scale. He identified each vessel’s pitch by both listening closely to it and singing beside it, using his voice as a sort of sonic dowsing rod. The thirty-two ultimately chosen correspond to consecutive notes spanning nearly three octaves.

Beer’s choice of vessels was dictated not by aesthetic or historical interest, but rather the demands of Western tonality. This has had provocative curatorial consequences: at one end of the room-spanning installation, a nineteenth-century ox-shaped German guild vessel faces British ceramicist Gordon Baldwin’s earthenware sculpture Axe Vessel (1986); nearby, Fish, a 1947 ceramic sculpture by New York Dada artist Beatrice Wood, gazes outward into the exhibition space, its lustrous coat iridescing beneath the spotlights. Arranged on plinths in a stark white, acoustically dampened exhibition hall, these strange bedfellows welcome goose-necked microphones into their hollows, necks, and openings. These amplifying microphones feed into an Allen & Heath SQ-7 digital mixer and a programmable keyboard; the vessels are mapped to corresponding keys on the keyboard, which can be used to “play” the Vessel Orchestra by activating individual microphones.

An instrument as unconventional as Vessel Orchestra warrants a rarefied class of performers, and the series of six evening concerts that Beer has programmed for the installation has, to date, already brought a wide array of guest artists into the space. An inaugural concert on July 5 highlighted compositions by John Cage and Philip Glass; July 12’s concert mined a very different end of the musical spectrum, featuring Lebanese indie-pop band Mashrou’ Leila. Visitors experiencing Beer’s installation outside of concerts, however, will find the vessels operating, according to press materials, “player piano-style,” autonomously executing a twenty-minute composition written by Beer and set to loop through Vessel Orchestra’s central console.

While there is something quietly eerie about this automated performance, during which the digital mixer’s sliding faders rise and fall of their own accord and pale lights on microphones glow, Vessel Orchestra is hardly the player piano of Kurt Vonnegut’s eponymous 1952 novel about a dystopian hell of total automation. No, what one feels while in the presence of Beer’s warbling vessels is a touching superfluity: the sense that these things have been singing, alone, for eons, and will continue to sing long after we leave.

Vessel Orchestra marks a clear extension of concerns present throughout Beer’s practice. Among the installation’s most obvious antecedents are works in the artist’s recent Household Gods, staged this past winter at Galerie Thaddaeus Ropac in Paris, and Devils(2017), both of which explored the internal ambience of vessels through microphonic amplification. The former assembled shrinelike installations of hollow objects selected from the personal collections of Beer’s family members, while the latter consisted of objects that harmonized in augmented fourths, thus sounding a musical interval historically termed diabolus in musica (“the devil in music”) for its dissonance. Beer’s exploration of resonance at the scale of the vessel is itself a recent manifestation of his abiding interest in the inherent musicality of architecture: since 2007, the artist’s “Resonance Project,” a continuing series of performances, installations, and films centered on the vocal stimulation of architectural spaces, has fashioned museum buildings, a Victorian sewer network, and a Turkish bathhouse into vast spatial instruments.

What distinguishes Vessel Orchestra is its more pointed museological intervention. Made to harmonize despite differences of appearance and provenance, Beer’s vessels lead one to wonder what other inborn alignments cut across the Met’s organizational hierarchies and display imperatives. It was, of course, Beer’s lengthy selection efforts and close tailoring of Vessel Orchestra’s final presentation that both catalyzed this intervention and gave it shape and potency; Beer, however, has accorded his vessels more agency, remarking at the July 19 concert that they “chose themselves.”

Beer’s humility before his objects and their native pitches strongly echoes that of experimental composer Alvin Lucier, whose work Beer counts as an influence. When I first encountered Vessel Orchestra, I was reminded of Lucier’s 1968 composition “Chambers,” a score that asks performers to “collect or make large and small resonant environments”— cupped hands, bowls, pots, bottles, tunnels, and cisterns—and sound these environments through bowing, blowing, rubbing, caressing, and all other manners of excitation. First inspired by the conch shell—nature’s most noted resonator—“Chambers” followed from Lucier’s desire to let natural pitches “be themselves.” Vessel Orchestra similarly cedes the floor to its objects and their voices. Beer asks merely that we rest our eyes, and listen to the vessels in resonance, singing with throats granted new reach.