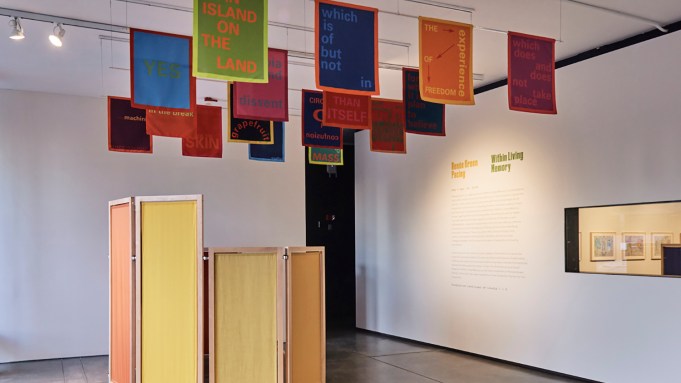 Spanning two floors of Harvard University’s Carpenter Center for the Visual Arts, Renée Green’s exhibition “Within Living Memory” is both a site-specific reflection on modernist architecture and its afterlives, and a capacious retrospective of the artist’s probing video essays, photos, prints, and mixed media installations. The culmination of “Pacing,” Green’s two-year residency at the Carpenter Center, “Within Living Memory,” on view through April 15, explores themes of space, place, migration, history, utopia, and ruins. Displayed in the curvilinear concrete structure designed by Le Corbusier in the early 1960s, Green’s works include photos and videos she produced twenty-five years ago while inhabiting another esteemed building by the same architect, the social housing complex Unité d’habitation in Firminy, France. In “Secret, Part 1. Practiced Places,” a 1992-93 essay on that project published in her 2014 collection Other Planes of There, Green cites the cultural critic Michel de Certeau’s definition of space as “practiced place” to invoke the ways places are transformed by the people who pass through them and put them to varied, often unintended uses. Green’s attunement to elusive social dynamics and local histories binds together the many works exhibited in “Within Living Memory,” which are rooted in particular places—modernist structures designed by Le Corbusier or Rudolph M. Schindler, cities including New York, São Paulo, and Berlin, and islands from Majorca to Alcatraz—that become spaces through the everyday practices and ideas that Green uncovers in them.

Begin Again, Begin Again (2015), a forty-minute video essay, is an expansive meditation on modernity that unravels around the central figure of Rudolph M. Schindler and his 1912 manifesto “Modern Architecture: A Program.” Video documentation of his landmark West Hollywood home mixes with elemental footage of underwater flora and open expanses of land, as well as archival imagery marking milestone events from 1887 to 2015 (the years of Schindler’s birth and the film’s diegetic present), including world wars, struggles for freedom, and mass migrations. A baritone voice alternately reads from Schindler’s manifesto and reflects on the nature of matter, identity, and survival, asking, as if from a transcendent elsewhere, “What was life?” Such ontological musings clash with both the voiceover’s chronological enunciations of the film’s timeline and its programmatic declarations of Schindler’s text, but the fractured narration resolves around a central theme: the imposition of modern ideologies of order. Racial hierarchies, settler-colonial projects of conquering new environments and the people indigenous to them, and utilitarian divisions of space and time are all implicated, as Green subtly underscores the violent ordering of things by converting Schindler’s manifesto into numerical list form: “27. The architect has finally discovered the medium of his art: 28. SPACE.”

A core concern of Green’s exhibition is how to index the dreams (and nightmares) of modernity—how to filter and transmit histories of futures imagined in the past in ways that can activate their potential in the present. Displayed alongside prints of two lightly altered texts by Schindler are a series of letterpress works titled “Selected Life Indexes” (2015, 2018), which trace the lives of five intellectuals—W.E.B. Du Bois, Albert Einstein, Lou Harrison, Paul Robeson, and Muriel Rukeyser—who shared in common their residence in the United States after World War II and their commitments to pacifism and internationalism, if little else. Giving form to these social histories through her longstanding interests in seriality and citation, Green samples words and phrases associated with each figure, sequencing them in alphabetical and other orders on 18-by-22-inch prints bookended by years of birth and death. Albert Einstein (2015), for example, begins “1879  absolute rest  acceleration  aesthetics  aether  ambiguity” and ends “during First World War  Freundlich, Erwin Finlay  1955.” Fragmentary constellations of concepts and events emerge as fallow traces of these lives, prompting us to engage with their unfinished legacies.

Green activates an attention to the process of reading and the reception of historical narratives by reshaping her source material across related moving-image works, prints, and photographs. The aforementioned prints organize on paper the themes and scripts of films installed adjacent to them, including Begin Again, Begin Again, as well as Climates and Paradoxes (2005), a video essay that pivots around Einstein’s life from the vantage point of a Berlin high-rise and its environs. The work is a poignant portrait of the political histories and cultural imaginaries that haunt spaces, framed through an etymology of the word “climate”—klima, or inclination—that she redirects to identify “what falls from the sky and what falls away from understanding.” Green renders an indictment of the climate of late capitalism by pairing this redefinition with images of people in states of literal and figurative suspension: bungee-jumping, riding carousels, walking through neon-lit commercial spaces that emblematize the amnesic hypermodern corridors the anthropologist Marc Augé has called “non-places.” The artist has fabricated spaces for viewing this and other works; visitors watch them on monitors housed in her Media Bichos (2012), modular structures made of standing wood frames canvassed with brightly colored textiles, above which hang Space Poem #3 (Media Bicho), 2012-2013, a grid of banners that cite modernist works and radical watchwords in vivid fonts threaded onto polyester. Through the dimensions of the page and the screen, and the contours of rooms she assembles in relation to the building itself, Green creates a resonant space for ideas to intermingle, collide, and take on new forms.

Green is explicit about her influences, from the modernist figures cited above to more contemporary artists and theorists whose names and methods surface across her work. Among the most recent of several video essays included in “Within Living Memory,” ED/HF (2017), short for “Extraterritorial Durations/Harun Farocki,” is a portrait of both Green and of the late pioneer of the essay-film. The artist finds in Farocki’s life a personal history of migration and a critical concern with the politics of displacement articulated in ways that exceed “a one-to-one statement about identity,” as she said in an interview in A.i.A.’s February issue. “He exemplified mixture, combination, yet didn’t speak about it,” says the film’s German-accented narrator, who later employs the first person to narrate events of both Green and Farocki’s lives: “1959. I am born . . . 1962-1966. I ran away once and for all, moved to West Berlin . . . .” Yet, here and elsewhere in this exhibition, Green’s attempts to destabilize identity and resuscitate counter-histories are overwhelmed and undermined by her erudite citations. The effect, for example, of quoting Michel Foucault’s canonical essay “What Is an Author?” within ED/HF is to reify rather than relinquish the legitimating function of authors’ proper names, and to inscribe Green’s own name after those of Farocki and Foucault. While the artist’s decades of critical, innovative multimedia work warrant indexing alongside these and other thinkers, her incisive reflections on modernity risk being subsumed into the settled forms of history that her methods of sampling and modularity seek to disrupt. “Within Living Memory” is most generative when it exceeds the authorized names and places of modernity to uncover social contradictions and possibilities in the lived texture of spaces—and to uncover, in these traces, new beginnings.