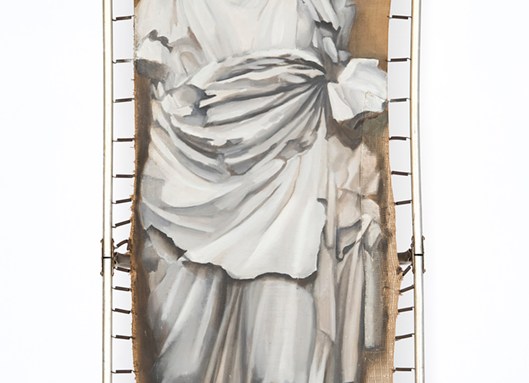 Irina Nakhova (b. 1955) spent her formative years as part of the close-knit Soviet artistic underground community known as the Moscow Conceptualists. In the 1980s she created disorienting immersive installations in a room in her apartment. For Room 2 (1984), she painted the space with a stark black-and-white pattern that gave the illusion that fissures and caves had opened in the walls, floor, and ceiling.

In “Museum on the Edge,” a retrospective of her work at Rutgers University’s Zimmerli Art Museum, which holds the world’s largest collection of unofficial Soviet art, Nakhova’s pioneering apartment installations are represented only through photographic documentation. The focus of the show is her subsequent work, from the post-Soviet period, which deals with art history and the workings of the museum as an institution intended to house great art. The painting Vanitas 1 (2017) is a copy of Rembrandt’s Portrait of an Old Woman (ca. 1650–55), with Nakhova’s face, ghostly white and with eyes closed, painted over the composition, blocking out everything but the old woman’s head and right hand. The work is a rumination on death, namely the death of the artist, and on the immortality afforded through art. In a series of short videos, “Gaze” (2016–19), images of paintings from museum collections are blurred except for small, roving circles that suggest lenses bringing certain areas into focus. In each work, the moving circle is meant to imitate the meandering gaze of a particular viewer—an unidentified man, woman, or child, or, in one case, the artist herself—who is revealed in a photograph at the end. While slightly ironic, the work suggests deep reverence toward museums and, as conveyed in the viewers’ respectful or wonderstruck expressions, the cultural engagement they allow. Yet despite such reverence, Nakhova—one of the few women Moscow Conceptualists—also critiques art history’s gender bias. One of the most compelling works in the show is Queen (1996), which appears to be a medieval statue of a crowned female swathed in gray silk. As the viewer approaches, the sculpture comes to life, the fabric inflating into a tall phallic shape. The phallus completely obscures the “queen” before collapsing and once again becoming her soft drapery. Playful yet poignant, the piece illustrates how binary qualities—masculine and feminine, carnal and spiritual—depend on and support each other.

The show’s centerpiece is the interactive installation The Battle of Invalids (2017). A section of the museum floor is marked as a playing field. Two teams of papier-mâché figures on wheeled platforms can be operated remotely with joysticks. Members of one team are modeled on a fragmentary Greek sculpture of an athlete’s torso, while the others replicate a Japanese wood carving of a warrior with missing legs. (Both of the source works are owned by the Metropolitan Museum of Art.) A video projection shows the game in action: the abject lopsided figures wheel around mindlessly, occasionally crashing into the walls and one another. The fatalism resonates with the hopeless mood currently pervading politics and culture in both the United States and Russia. But the work, as Nakhova says in an interview in the exhibition catalogue, relates to the wounded veterans of the Soviet-Afghan War, some of them amputees who depend on crude wooden dollies to move around and who beg for money in Moscow Metro stations. In The Battle of Invalids, as in her other best works, Nakhova taps into universal truths about the human condition. The illusion of order in the gamelike installation barely masks the chaotic play of uncontrollable forces.

The Best Yoga Mats for Men Who Want To Get Zen