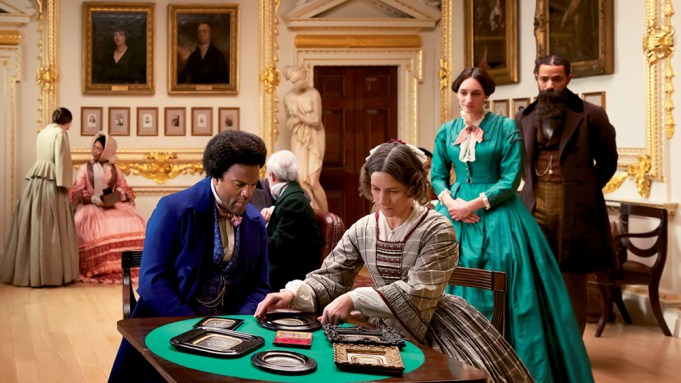 If there were justice in the United States, Frederick Douglass’s face would be on the twenty-dollar bill, not Andrew Jackson’s. Douglass’s speeches would be as well known as the Gettysburg Address. And Isaac Julien’s new ten-channel video installation about the great black orator, Lessons of the Hour (2019), would be shown in high schools across the country. That last part may sound like hyperbole. But consider: Douglass was once one of the most famous figures in the US, the most photographed man of the nineteenth century. His eloquence came from hard experience: as an enslaved child, an abolitionist activist, and finally an elder facing the intractability of American racism. His voice is as needed as ever today, and Julien delivers it with stirring power.

While the work has an elliptical narrative structure, as is characteristic of Julien’s practice, it is an effective civics lesson nonetheless. Here is Douglass in his youth (without the grizzled whiskers and mane of his later years), portrayed by the actor Ray Fearon. He is gloriously attired—at times in a long vibrant red coat and at others in an indigo one, the pair presumably alluding to the current color code of American politics.

We see Douglass, a human allegory, striding under an autumn tree as the sound of a rope creaking evokes a lynching. In another scene, we see his naked back, scarred from the lash. Elsewhere, we witness him testifying to a small amphitheater, delivering fragments of three key speeches. The audience members gaze at him, rapt. They are notably diverse, black and white and otherwise, variously in period and contemporary costume. The whole country is listening, it seems, as Douglass proclaims with fearful urgency: “There is not a nation on the earth guilty of practices more shocking and bloody than are the people of the United States, at this very hour.” The audience rises to applaud these words. The ovation fades. The loop begins again. The rope creaks.

In fashioning this portrait, Julien puts his many projection screens to good use. When Douglass steps up to the podium, for example, we view him once from the front and nine times from the back, the latter perspective emphasizing his vulnerability. And though he is very much at the center of the narrative, there is also a skillfully mapped periphery. People who played key roles in Douglass’s life make brief appearances, among them his wife Anna Murray-Douglass tending to blue fabric on a sewing machine (maybe making that coat), the suffragist Susan B. Anthony, and the African American photographer J.P. Ball.

Also woven in, flickering fitfully across the multiple channels, is sourced footage linking Douglass’s times to our own: patriotic parades, fireworks, the Baltimore riots following the murder of Freddie Gray. These contemporary references were amplified by a presentation of photographs in the gallery, most of them portraying actors from the video, made using both digital cameras and nineteenth-century tintype technology—an intermingling of present and past. Julien’s back catalogue also makes an appearance, in the form of photos relating to the subject of his first film, Who Killed Colin Roach? (1983)—a reminder that his work has addressed violence against black bodies for a very long time.

If Lessons of the Hour were to get a high school release, it would ideally be shown as a double feature with Steve McQueen’s Twelve Years a Slave (2013). Together, these two great works of art say much that we all should know about the country’s troubled history, of which we are the inheritors. Tellingly, both filmmakers are British. Perhaps it takes an outsider to see so clearly? Douglass said in 1852, “There is consolation in the thought that America is young.” We are older now, and perhaps ready to ask—how much the wiser?