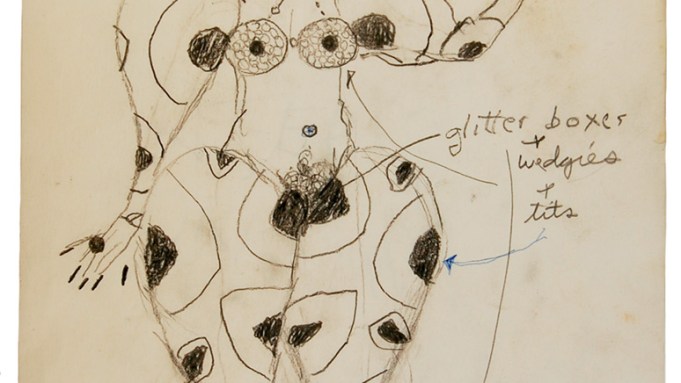 Jack Smith is known almost entirely for his playfully risqué film Flaming Creatures (1963); as noted in the pamphlet accompanying Artists Space’s exhibition “Art Crust of Spiritual Oasis,” the underground classic informed how Susan Sontag defined camp in her landmark essay “Notes on Camp” (1964). Suffice it to say, there was lots of that quality on display in the show, which presented the late artist’s work from the 1970s and ’80s—though “work” is something of a misnomer, since most of what Smith produced during this time was strategically ephemeral performance events of which only documentation remains.

Split into sections and spread out over two floors, “Art Crust of Spiritual Oasis” comprised mostly handmade performance flyers, posters, collages, archival photographs, and audio and video snippets that conveyed the silly, DIY style of Smith’s post–Flaming Creatures output. Opening the exhibition was an audio recording of a monologue he performed in 1981, “What’s Underground about Marshmallows?” in which he discusses landlordism and the “fear ritual” of paying rent every month. Nearby, headshots of the artist in stereotypical Hollywood poses contrasted with projections of 35mm slides showing him dressed like a lobster—he frequently employed oceanic plotlines—delivering rent checks in an envelope.

The subsequent section was titled “Plaster Foundation of Atlantis,” after the loft Smith lived in on Greene Street from 1969 until he was evicted in 1971. Smith turned the space into a performance venue and “trash heap.” The nine performances he staged there were notable for their freewheeling structure, insufferably long running times (often they stretched into the wee hours of the morning), and overall disorganization. Smith’s sketches, storyboards, and handwritten flyers for these performances were displayed in vitrines. They abound with humorous phrases, such as “Live Crab Ogress on Display! Clamercials! Clapitalism!” In the back corner of the gallery space, the film No President (1969), which was shot at the loft, played on a monitor. It’s classic Smith; camera close-ups and abrupt cutaways make it hard to follow the characters, many of whom are in drag and mostly just pose. Their faces are occasionally framed by two men stroking hard-ons above them, their dicks bouncing in the most unflattering ways. The whole thing is hilariously incoherent.

The exhibition troubled what exactly we should consider to be Smith’s work. Walking through, you got the nagging sense that you had missed out on something. But at the same time, it was obvious that Smith placed a lot of value on the ancillary photographs and flyers, and that he intended them to live long afterlives since the performances couldn’t. In that sense, one wonders if he thought of them as the work more than he did the performances. Indeed, the materials constitute not just an archive gathering dust, but something almost as performatively alive as Smith was.

The 11 Best Ultra-Premium Chocolates to Buy Now, for Valentine’s Day and Beyond

‘Cunk on Earth’: A Hilarious Mockumentary From the Creator of ‘Black Mirror’