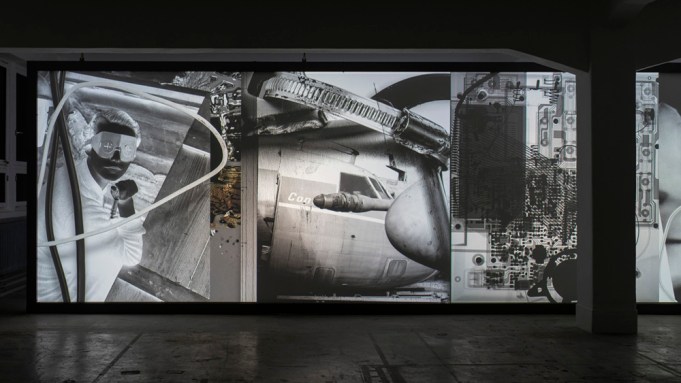 Despite the cheeky title, James Richards and Leslie Thornton’s collaborative exhibition “Speed 2” was not an ironic commentary on popular culture. Rather, it was a thoughtful, meditative expansion of an ambitious, surprisingly personal show about science and fear that the artists staged at the Künstlerhaus Stuttgart in 2018. “Speed 2” required viewers to devote time and attention to building connections among its interlocking components: a video by Thornton; a collaborative video by Thornton and Richards; a six-screen video with wall text by Thornton, Richards, and the poet Vi Khi Nao; another multichannel video installation by Richards; and a show-within-the-show curated by Richards and featuring the work of eight other artists.

Richards and Thornton conceived the “Speed” project after a joint residency at CERN, the European Organization for Nuclear Research. This partially accounts for the paranoid obsession with technology and science that ran through the work in the exhibition. Many pieces referred to resurgent Cold War fears. The show-within-the-show included hundreds of Polaroids from the late 1980s by Horst Ademeit (1937–2010) that supposedly document the effect of radiation on the artist’s body and surroundings. Marginalia on the pictures describe fleeting sensations caused by his exposure, and the seemingly nondescript images of daily life appear permeated with invisible rays. Each detail potentially manifests a toxic radioactivity. In a different key, inkblot drawings by Bruce Conner (1933–2008), some of them signed with his pseudonyms Emily Feather and Anonymouse, feature delicate Rorschach-like patterns that bring to mind the mushroom clouds in his 1976 film Crossroads, which features footage of the nuclear test on Bikini Atoll.

Richards and Thornton’s collaborative video, Crossing (2016), alludes to Conner’s film in its title. It is collaged from footage the artists had shot but not yet used. The crossings in the work are the intersections in meaning that emerge where their sensibilities overlap. The work is built from ordinary or innocuous images that together obliquely evoke some danger: solarized footage of ants and bodies, tight close-ups of scaly animals, digital kaleidoscope effects.

Thornton said in a recent interview in Frieze that she and Richards share an interest in the ineffable. Although “Speed 2” conjured the specter of the Cold War, it did not offer topical commentary on recent revivals of Russophobia and nationalism in the West. Instead, the exhibition expressed amorphous fears of scientific and technological development unhinged from ethical or humane purpose. A catastrophe could come at any moment, if it hasn’t arrived already. Richards’s three-channel video installation Phrasing (2018) features rotating images created using an industrial X-ray machine. Small analog devices, wires, and medical technicians all glow portentously, as if contaminated and contaminating.

Thornton’s video Cut from Liquid to Snake (2018) anchors such anxiety in autobiography. Her father and grandfather were both engineers on the Manhattan Project; her father screwed the last bolt into the bomb dropped on Hiroshima. In one segment of the video, Thornton interviews her aunt about the secrecy that shrouded her father and grandfather’s work; family members didn’t know what their jobs entailed, and the two men were unaware of each other’s involvement. In another segment, an appropriated audio interview with an American woman who was present at Hiroshima accompanies footage of a tar pit bubbling: the woman’s account of the devastating injuries she witnessed is impassive, even nonchalant, disturbing in its emotional remove as much as its content. The tar pit suggests buried depths, hidden pasts, and the threat of history being sucked under.

Cut from Liquid to Snake touches on the inextricability of trauma, guilt, and repression—not just as they pertain to personal histories, but as social issues, transmittable psychological structures that affect collective mentality and cultural mood. The interview with the dispassionate American woman signals beyond Thornton’s autobiography to a broader historical context: no matter how strong the guilt passed from father to daughter may be, it cannot compare to the death and maiming of hundreds of thousands of people. Such remove from sites of tragedy was part of what made the Cold War anxiety conjured in “Speed 2” so abstract and pervasive. The show treated the threat of destruction by unbridled advancement in the science of weaponry as omnipresent and real, yet experienced indirectly and imaginatively, through inheritance and viral paranoia.