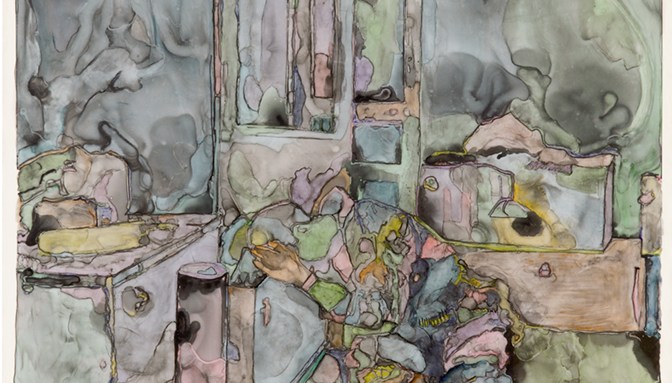 Jasper Johns has been busy. Tackling new experiments and pursuing his consistent themes in a range of mediums, he works with an alacrity that belies his eighty-eight years. Many of the pieces in this exhibition of recent paintings, drawings, and prints bring his earlier imagery into new formats. At the entrance to the show is a square oil painting from 2016 that rehearses a composition Johns has explored in works since the mid-1980s. Based on Picasso’s painting Woman in a Straw Hat (1936), Johns’s works portray objects and shapes in face-like arrangements. The incarnation presented here shows two “0”s for lopsided eyes, a ruler for an errant nose, and two uneven peaks for a mouth on a field of electric blue.

More compelling than this, however, are paintings and works on paper related to the “Regrets” series that Johns debuted at the Museum of Modern Art in 2014. The composition of the works originates from a 1964 photograph of the painter Lucian Freud that Francis Bacon owned. (Johns saw it in an old auction catalogue.) In the image, Freud sits on a bed and covers his face. Yet most prominent in Johns’s renditions is a shape derived from the negative space where a piece is missing from the photograph. Johns redoubles and mirrors this absence, producing a vaguely biomorphic motif.

In the same gallery as the new “Regrets” hung three paintings (all untitled and 2017) that allude to Picasso’s weeping women of the 1930s and incorporate a “Rubin’s vase” in which the facial profiles suggest that of the Spanish artist. But more profoundly than any Picassoid iconography, it is the legacy of Synthetic Cubism and papier collés that informs Johns’s work. We see this inspiration most plainly in the exhibition in a charcoal drawing from a series of works revolving around the image of a skeleton flanked by objects and signs (the composition updating his 1986 “Seasons” series—where the central figure is a human silhouette—with a patent sense of mortality). The drawing bears stenciled text and faux bois grain that exacerbate the image’s play of flatness and depth.

This play between planarity and recession appears to mesmerizing effect in the real heart of the show: a number of works in different mediums that, as in “Regrets,” mirror the composition of a source photograph to produce a doubled image. In both scale and complexity, a large untitled 2018 painting rendered in various shades of green anchors this group. Wrought from encaustic—the medium Johns brought to modern prominence in his Flags and Targets of the 1950s—on canvas, the work contains various forms, some hard-edge and some soft-, that only gradually reveal a seated man in an interior space. Stenciled text along the top and bottom edges of the canvas reads, FARLEY BREAKS DOWN / AFTER LARRY BURROWS, identifying as the painting’s origin a famous Vietnam-era snapshot by the English photojournalist Larry Burrows. Published in Life magazine in 1965 as part of a fourteen-page photo-essay titled “One Ride with Yankee Papa 13,” Burrows’s searing image captures helicopter crew leader James Farley hunched over in anguish following the fatal outcome of a mission for troops under his command.

Johns retains many features seen in the photograph, including the window at the back of the room and the stacked trunks and boxes placed around the floor. These and Farley’s huddled form appear flattened and pressed close to the picture plane, where they display an astonishing range of textures and effects, from ridged dots and faintly gridded patterns to mottled areas recalling green camouflage. Silk screened images from newspapers surface near the center of the canvas, including a cartoon of a dollar bill, evoking both the seriousness of news dispatches and the escapism of popular entertainment. In terms of handling, form, and composition, the painting calls to mind the work of artists as wide-ranging as Pierre Bonnard, R.B. Kitaj, Henri Matisse, and William Baziotes. Indeed, it seems like something made in the early or mid-twentieth century rather than in the past year; its forms engage as much with a history of modernist painting as with charged subject matter.

Since 2002, Johns has been reworking the Burrows image in paintings on plastic sheets, portraying it in diluted ink, watercolor, water-soluble encaustic, or some combination thereof. The pooled and swirling washes of ink pigment in Farley Breaks Down (2014) suggest a mix of chance and preparation, as formal distortions compete with a still-legible sense of space. Two untitled examples, from 2015 and 2016, warp the Burrows image into almost totally abstract form, overlaying it with thin lattices. The mix of inky stains, transparent supports, and gridded frameworks produces paintings that vaguely resemble stained glass. The abstracted and washed-out imagery conjures up the “fog of war” and, perhaps, the way in which memory, including collective recollections of national pain, can dwindle, sometimes to deleterious consequence.

Finally, a Champagne Bottle Designed to Let You Drink Sparkling Wine in Space