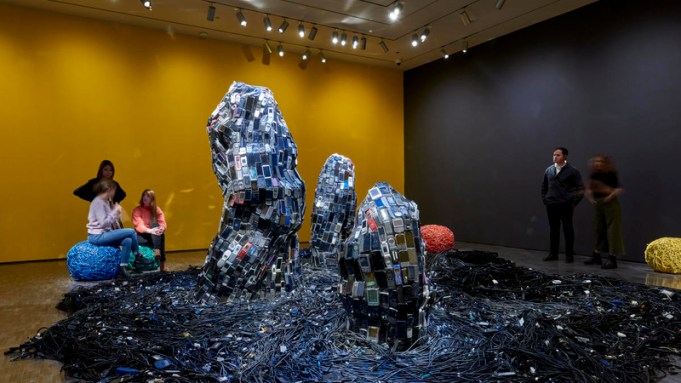 In his book Radical Technologies: The Design of Everyday Life (2017), interface designer and cultural critic Adam Greenfield writes: “We need to understand ourselves as nervous systems that are virtually continuous with the world beyond the walls, fused to it through the juncture of our smartphones.” Our increasing dependence on digital forms of connection has a price, of course, resulting in, for instance, vast amounts of electronic waste. Jean Shin made this reality strikingly visible in “Pause” (2020), an installation at the Asian Art Museum in San Francisco for which she turned thousands of discarded phones, laptops, hard drives, and cables into a sculptural landscape.

City Slickers on the Wild Side: The Barnes Foundation Celebrates the 'Art of Flânerie'

Shin regularly creates installations in which meaning accrues through the accumulation and alteration of found objects. Her installation Everyday Monuments (2009), shown at the Smithsonian American Art Museum in Washington, D.C., brought together some two thousand sports trophies, donated by area residents, that she modified by giving the athletic figures props like brooms, hammers, and tires, so that the trophies became celebrations of everyday labor. For MaiZE (2017), at the Figge Art Museum in Davenport, Iowa, Shin drew inspiration from the local agricultural landscape. The work was a labyrinth of green plastic bottles stacked, cut, and molded to resemble cornstalks. She worked with eight hundred volunteers to realize the installation, involving the community in a project that engaged issues of plastic waste and environmental stewardship. “Pause,” too, was a collaboratively produced, environmentally minded artwork that bore an intentional relationship to the city in which it was shown—in this instance, a hub of the tech and telecom industries.

At the center of the installation was a sculptural work called Huddled Masses, which consisted of three hunched and twisted columns assembled from plastic and metal. As you looked at them, you recognized obsolete devices: PalmPilots, BlackBerry pagers, and Motorola Razr flip phones, among others. Computer power cables lay in waves around columns’ bases, forming curving patterns like sand in a Japanese rock garden. The mise-en-scene reminded me of depictions of the Fates, the Greek goddesses who are tasked with assigning people destinies and often shown weaving the future. Like the Fates’ threads, the power cords are components of systems that connect and disconnect people. Around the gallery’s perimeter were poufs woven from thousands of ethernet cables. Visitors were welcome to sit on them as they took in the work.

“Pause” invited the audience to slow down and reflect. While all museums are spaces for contemplation, the site of “Pause”—a small corner gallery closed off by black glass doors—seemed especially conducive to meditation. There was a tension between serenity and dread in the space. The installation was not just an archaeological presentation of electronics from the past two decades, but a confrontation with our present dependence on such devices, a spectacle of mass consumerism. Our drive to connect is tethered to a desire for novelty: we want more from our technology. We want to share and consume more information more quickly. And so the companies that employ a substantial portion of the Bay Area’s population innovate and release updates that render previous iterations of their products obsolete.

To gather the materials for “Pause,” Shin partnered with GreenCitizen, a Bay Area–based organization that collects electronics for recycling, and the museum helped distribute an open call for Bay Area residents to donate phones for the work. That the installation used waste from a mere fraction of a local population only helped viewers envision the massive environmental impact of the global production, disposal, and destruction of electronics.

Shin’s work has often been compared to that of Tara Donovan, who creates undulating, monumental installations out of mundane objects. But while Donovan’s installations are formal exploration of repetition and scale, and demonstrations of how those qualities create a sense of awe, Shin’s channel wonderment into social awareness. In “Pause,” her provocations pushed viewers to reflect on a condition Greenfield describes as follows: “What keeps us twitching at our screens, more even than the satisfaction of any practical need, is the continuously renewed opportunity to bathe in the primal rush of communion.” We are eager to connect even when there is nothing to see. Representing this nervous compulsion in an alluring sculptural installation, Shin forced viewers to pause, if only for a moment.