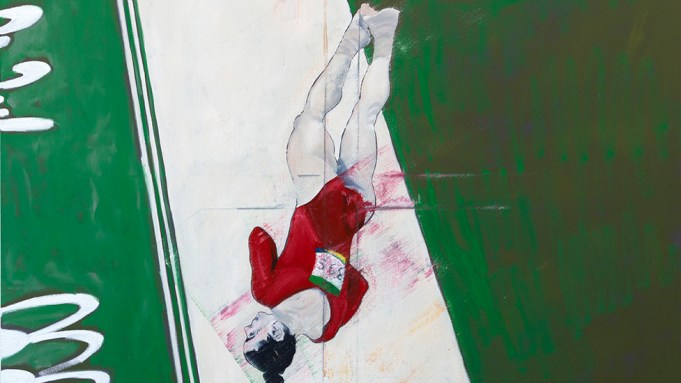 In the twelve paintings on view in this exhibition, Jeanette Mundt spread her subjects across the spectrum of realism and abstraction, playing with the tension between almost athletic precision and painterly flights of fancy. On one end was the field of red blossoms in Heroin—Some Poppies (2019), rendered matter-of-factly—almost stubbornly—on raw linen. On the other was All the Little Bugs Swarm (2018), a swirling gestural abstraction in hues of gold and beige. Although among the most abstract works on view, this painting in fact belongs to a series based on paparazzi photographs of Princess Diana; the more clearly figurative I Am the Princess and I Am Worth Saving (2019) shows the princess dangling her legs from a diving board into a brushy ground of marigolds and lavenders, the same dashed-off white strokes in the corner.

Half of the canvases in the show portrayed the members of the US women’s gymnastics team at the 2016 Summer Olympics, paused in the course of stunning physical feats. The gymnasts are depicted individually in boldly colored compositions based on photographs. Prominently displayed near the entrance was an image of Aly Raisman (Best Individual: Aly Raisman III, 2018), rendered mid-flip with graphic clarity. Intersecting lines on the painting’s surface form crosshairs that emphasize the congruence of the center of the canvas with the gymnast’s center of gravity, the point around which she spins. Mundt’s paintings, despite their loose brushwork and hazy details, are ultimately precise: they stick the landing.

It’s tempting to read Mundt’s gymnast works as speaking to the parallel achievements of art and sport: repetition, practice, and execution play significant roles in both. A painting of Madison Kocian airborne (Born Athlete American: Madison Kocian II, 2019) slices and recomposes the gymnast’s floor routine into a portrait of a body in motion. The effect is lyrical, more Étienne-Jules Marey than Eadweard Muybridge. The source image for this painting—and those for her similar works in the 2019 Whitney Biennial—came from a feature in the New York Times that composited several points in the women’s routines into single images. Mundt adds strict vertical separations to Kocian’s positions, heightening the dark undercurrent running through the original treatment, a visual dissection that exposes the subject to a dehumanizing scrutiny. It is misogyny couched in the language of science, biology, sports, and art—that is to say, an objectifying admiration, not much different from the paparazzi shots of Diana swimming.

Mundt brings the point home with her handling of the floral still life. In Heroin—Corot’s Still and Some Digital Poppies (2019), the blossoms are depicted on a black ground surrounded by an electric blue wireframe that suggests an undulating digital landscape whose details have not been filled in. The flowers that produce heroin thus evoke heroines adrift. Princess Diana was hounded to death by the press, while Kocian, Raisman, and Simone Biles came forward, after winning gold, as victims of the team doctor, a pedophile who has since been convicted on multiple charges of sexually assaulting minors. Mundt’s paintings portray not so much the figures as their public condition and the violence accompanying the abstraction of their image.