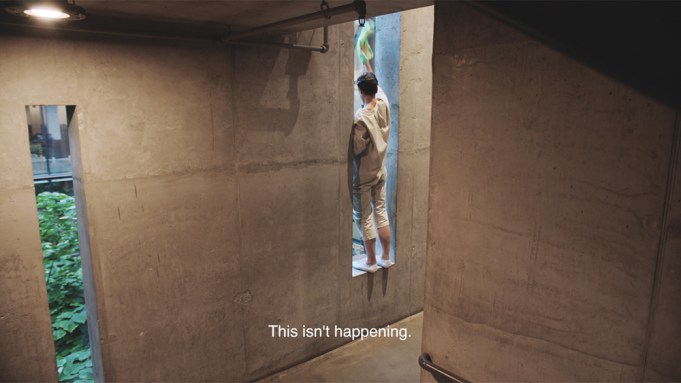 Jennifer and Kevin McCoy’s latest show at Postmasters centered on a new fictional video titled Cleaner—the second in their “Workstations” trilogy, which began with Broker (2016)—that explores how stark the disjuncture between blue- and white-collar labor has become. The protagonist is a Polish woman employed as a cleaner at a hip office (the video was shot at the Brooklyn headquarters of Kickstarter, where the McCoys were artists-in-residence in 2018), and her movements contrast with the zombielike stillness of the office workers. She judges their weird health food in her inner monologue, which we hear throughout the video in voice-over, and enjoys the fact that they don’t notice her.

While contorting her body to clean a tall window, her monologue switches from Polish to English: “I’m not here. This isn’t happening,” she repeats. She becomes increasingly bold in her work routine, erasing a whiteboard drawing in spite of the directive not to do so written in large letters. The drawing suggests a sort of cartoon diagram of the company’s plans to dominate the universe. Arrows connect various components: terms like BLUECHIP and SUCCESS, logos for companies like Seamless and Uber, a rocket sporting the branding of Facebook, Amazon, and Google and bearing a giant poop emoji in place of its engine. The lifestyle represented by this office culture is completely alien to the cleaner. She asks herself why the company has so many workers and why they all have the same computers.

The office workers appear to dissociate from their surroundings, hypnotized by their screens, not even noticing when the cleaner, who is played by a professional dancer, starts to incorporate elaborate modern-dance-style choreography into her maintenance routine. She elegantly rolls across their desks, collecting crumpled papers along the way. She propels herself toward her mop with grand battements and carries out interpretive movements on a conference table instead of cleaning it.

Soon enough, she has other people to dance with. At night, after the nine-to-fivers have left, she puts tape on the security camera lenses and throws a party, charging a cover. Exploiting the invisibility of her labor and using her intimate knowledge of the building, she makes some extra cash and has some fun, even if—unable to leave her maintenance work fully behind—she has to clean up after her guests, picking up food they drop or doing damage control when they get belligerent.

The cleaner’s movements in her day job don’t seem intended to convey the physical demands placed on her body. Instead, they come across as beautiful gestures representing a physical freedom that stands in contrast to the sedentariness of the office workers. This glamorization of manual labor was enhanced by her uniform—a trendy-looking version of a boilersuit—and by the ten tin casts of liquid spills that gorgeously cascaded across the gallery floor. By most people’s standards, cleaning other people’s messes is not a fun exercise or an aesthetic expression, and the McCoys’ presentation of such work glosses over serious concerns involving the exploitation of blue-collar bodies. Even so, Cleaner successfully highlights the absurdity of our division of labor today—when some of us use our bodies too much, and others only enough to strain our eyes and carpal ligaments.

This article appears under the title “Jennifer and Kevin McCoy” in the February 2020 issue, pp. 87–88.