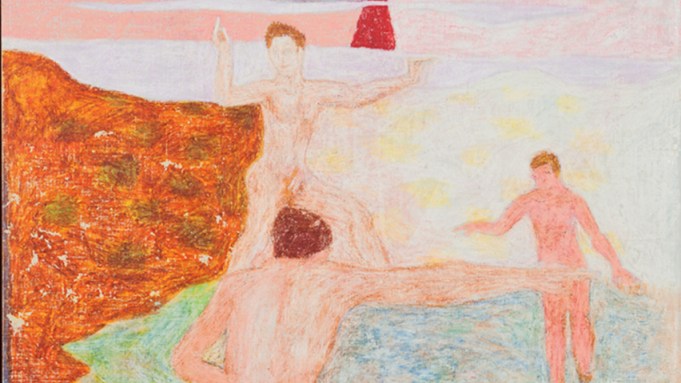 Four nested heads, their features interlocking: the drawing, from 1966, could be the cover of a Love album or an Aldous Huxley novel. In fact it’s an illustration by the late San Francisco artist known as Jess (1923–2004) for a poem, “Surrealist Shells,” by Robert Duncan, his partner. It’s as good an entry point as any for Jess’s wide-ranging work. The exhibition “Jess: Secret Compartments,” which traveled to Kohn from Tibor de Nagy Gallery in New York, showed that between the 1950s and 1990s he took up maybe a dozen styles—or dozens, depending on how you count them. The aforementioned illustration shows Jess in the collaborative role he often played. (Also on view were four other illustrations for Duncan’s poems, another for a book by Denise Levertov, and two covers for the poetry journal Credences.) It’s also slightly cheesy, of course. Whatever mode Jess employed—psychedelia, NorCal impressionism, modernist collage—he imparted just enough kitsch for the work to seem affected, almost performed.

Jess was best known for magazine-page collages that exist somewhere between Hannah Höch’s and Richard Hamilton’s. Among the zaniest examples in the show was Cake Walk Princess (1954), in which a woman with a roast chicken hat and various other finery walks a path of cake slices. In Untitled (Epic Ham), 1972, Jess did wordplay on a sheet of Nixon stamps by collaging the letters of “impeach” on the president’s face in various ways, forming, for instance, the phrases epic ham and me chimp. Two 1975 graphite-on-paper studies for paintings incorporate panels from the “Krazy Kat” comic strip into airy arrangements of Egyptian glyphs. One of the panels, much to Jess’s taste, serves to lampoon the profundities of artmaking: Krazy Kat stares at a light switch and marvels that YOU TURN OFF THE LIGHT AND TURN ON THE DARK, YOU TURN OFF THE DARK AND TURN ON THE LIGHT.

The most recent pieces in the exhibition, dated 1993, were elegant collages that, if it weren’t for an occasional jump in print quality, could just as well fit in his 1955 work Heavy Water: a Novel or The 40 & 1 Nights or Jess’ Didactic Nickelodeon, a thick handmade binder of collages on black panels. A film that Jess made in collaboration with filmmaker Lawrence Jordan in 1962 showing the “pages” of the Didactic Nickelodeon in rapid succession was also on view. This was the way Jess’s art tended to be: unreserved, emphatic, and collaborative in spirit—whether produced in partnership with colleagues or created in a manner that refers to his own oeuvre, which, as the show’s title might suggest, is a trove of linking chambers.

The LVMH Prize Is Turning 10 – and Open for Applications

‘Harry & Meghan’: Duke and Duchess of Sussex Open Up About Their Love Story in New Docuseries

60+ Useless Gag Gifts That Are Simultaneously Absurd and Awesome