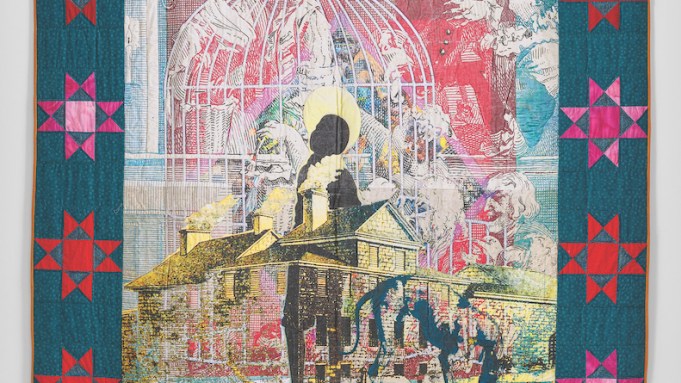 Drive long enough on any American highway and you will pass a prison. Even at a distance, its ominous form is instantly recognizable, the telltale watchtowers and razor wire–topped fences marking it as an outpost of the United States’s sprawling penal system. Millions of people are incarcerated in prisons, jails, and detention centers across the country, and tens of millions more must organize their lives around imprisoned loved ones. This web of incarceration is so large that it has its own economy, culture, and demographic trends.

In his solo show “American Rendition” at Malin, Jesse Krimes explores the history of the carceral state through a quintessentially American cultural artifact: the decorative quilt. Incorporating different styles and techniques, the twelve large quilts on view feature layered motifs alluding to the modern criminal justice system and its forerunners, slavery and work farms. In North Star (2019), the black silhouette of a person appears atop an image of a birdcage, his body intersecting with a nineteenth- century jailhouse, all framed by a border of Ohio stars, a traditional quilt pattern. At the center of another work, Equality Quilt (2020), a collage of photo-transferred images of protests and phrases like black power crowds into a diamond-shaped space. Krimes surrounds these emblems with arrangements of colored blocks covered in geometric and floral stitched patterns.

Carceral Aesthetics: The Conditions of Making Art in Prison

Incarceration forms the heart of Krimes’s creative inquiry. He studied sculpture in college but developed his work with textiles and collage while serving a six-year prison sentence for selling cocaine. In addition to the quilts, “American Rendition” features five small pastiches that Krimes made in 2009–10, while in federal prison in North Carolina. He created them with a spoon and hair gel, transferring images from newspapers onto canvases made of stretched bed sheets. Several reinterpret famous artworks, such as Botticelli’s Birth of Venus or Michelangelo’s Creation of Adam, replacing the heads of the paintings’ protagonists with newspaper portraits of celebrities and criminals. These smaller pieces presaged Apokaluptein 16389067 (2010–13), currently on display in “Marking Time: Art in the Age of Mass Incarceration” at MoMA PS1, a prison cell–size panorama that Krimes created using the same technique.

The quilts in “American Rendition” build on the image-transfer and textile works Krimes developed in prison. Krimes made six of them for a project he organized with the Vera Institute of Justice in 2019, “Voices from the Heartland.” Developed and staged in rural Lancaster County, Pennsylvania, where the artist grew up, the project was intended to draw attention to the fact that rural Americans make up the fastest growing population in jails and prisons, despite conventional notions that mass incarceration is an urban phenomenon. Krimes worked with current and former inmates and law enforcement officers to select the visual themes for the quilts and then with local Amish and Mennonite artisans to construct them. The quilts were originally exhibited in a barn at the center of a corn maze, accompanied by a slate of talks and community events.

Other works belong to a new series, “Elegy Quilts” (2020), which touches on the more personal effects of incarceration. Constructed primarily out of clothes and other textiles that the artist collected from current and former prisoners, the “Elegy Quilts” employ patchwork and appliqué techniques to depict empty chairs, inspired by conversations with several inmates about places that made them feel comfortable or at home. Set against beautiful patterns—swathes of floral print fabric or blocks of jagged cloth scraps randomly sewn together—the chairs are meant to represent both the absent prisoner and the domestic privacy and comfort they have lost.

Interest in quilting, the archetypal American folk art, declined after the advent of machined textiles in the early twentieth century but was rekindled around the 1977 bicentennial as a way to evoke cherished ideals of American exceptionalism: self-sufficiency, hard work, and thrift. Krimes’s quilts trouble this easy nostalgia. His work asks that we recognize the essentially American character of mass incarceration: from the slave plantation to the modern prison, it is woven into the fabric of the nation.