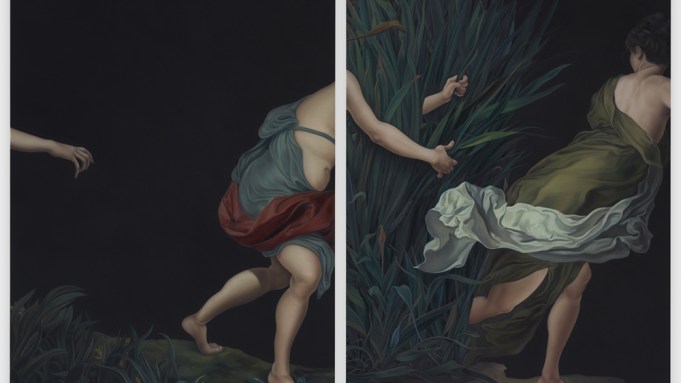 Painter Jesse Mockrin draws from art historical sources to create idiosyncratic scenes that are at once stripped down and rambling. Assortments of bodies or body parts shown against black backgrounds lead the eye from one detail to the next. In Catch (2018), a Mannerist-style hand runs its long fingers over the underside of a rearing hound, whose leg extends downward toward a dead duck that lies below, its curving claw, in turn, drawing us to the hare the bird rests atop. As the various bodies making up this pile reveal themselves, all the touching starts to seem a bit perverse.

Syrinx (2018) is a diptych portraying the story of Pan lusting after the titular wood nymph. According to the Greek myth, Syrinx begs the river spirits to help her escape Pan’s advances. They turn her into a clump of reeds, from which the caprine god fashions his famous musical pipes. Mockrin’s rendering of this tale of possession is a flash of limbs and fingers and a study of rippling skin. We see an arm extending into the left panel from the left-hand edge, reaching toward a fleeing, half-clothed female figure, whose body is cleaved by the inch-wide gap between the panels. Two arms in the next frame seem to belong to her. Or perhaps they are Pan’s, since they clutch at a stand of reeds. This second panel reiterates the general composition of the first, with a fleeing female figure again shown at the right side. Her arm is raised and—as if this is some sort of circular realm—reads as if it might be the one reaching into the left-hand panel, where we originally interpreted the arm as Pan’s.

The Syrinx myth has served as the subject for dozens of softcore masterpieces since the Renaissance. Mockrin cribs aspects of her image from works by the likes of Rubens, Titian, and Poussin. In her version, however, whether or not the nymph escapes, the viewer won’t get an eyeful. Throughout her works, Mockrin chops up her titillating subjects so that her figures aren’t almost-nudes. Instead, they’re almost-figures, dismembered by the canvases’ edges and vacuum-packed into particular sections of the compositions, set off by the abyssal fields of black.

This chopping up and isolating are what cue us to the work’s contemporaneity. Without them, Mockrin’s skillfully depicted images might pass as paintings from another century. Mockrin isn’t really painting the classics, in fact, but something like the bones of them, preserved like skeletons or ruins. For many people today, this is antiquity: a collection of fragments that signify nothing so much as “classical fragments.” Mockrin conveys a sense of history being somewhat out of reach, a broken lineage. Much like the necklace of mysterious trinkets shown draped over a hand at the center of her Ritual (2018), signs from the past appear in her work as so many runes, coming from a distant world and easily slipping from our grasp.