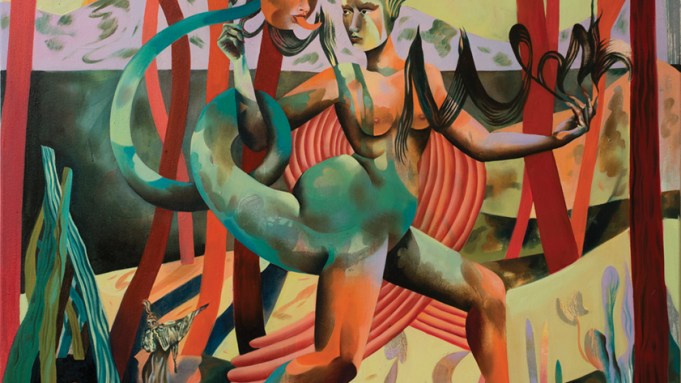 The works in Jessie Makinson’s exhibition “Tender Trick” (all 2019) were bustling with fantastical beings. A large wooden sculpture suggesting a marquee tent sat at the center of the gallery. Its interior and exterior were covered in patterns of elongated, undulating creatures, among them a woman with the head of a horse, two-headed acrobats in platform heels, and a snake-human hybrid with a beard and wings wearing thigh-high boots. The figures on the tent were silhouetted against a black background, their bodies formed from the exposed wood grain so that they seemed to emerge almost organically from the material. An array of small ceramic pots and vessels, arranged in three groupings around the gallery on handmade pedestals inspired by flora and fauna, were similar in spirit, with stark, linear depictions of imaginary beings—mermen glancing skeptically at their surroundings, naked women jousting on the backs of lions, an anthropomorphized sun—rendered in white on black grounds.

As the press release describes, Makinson’s inspiration for these works was Margaret Cavendish’s 1666 novella The Blazing World, an early precursor to science fiction. The story describes a young woman who travels through a portal in the North Pole to a utopian realm populated by talking animals and other strange creatures who accept her as their ruler. Eventually, she leads an invasion back to her home world. In a series of paintings lining the gallery’s walls, Makinson took this auspicious medieval narrative as a point of departure, constructing her own otherworldly realm of genderfluid, interspecies hybrids.

In Makinson’s paintings, giant anthropomorphized rats, birds, and serpents mingle with mythological creatures like centaurs and nymphs, as well as purple- and green-skinned humanoids with curling tails and horns. In the two largest canvases, My Fins are Sleeping and Silver Her Thorns, these creatures are arranged within indeterminate landscapes, with multicolored trees and horizontal blocks of color forming wavy grids that dissolve the distinction between foreground and background. Employing a dreamy palette of midnight blue, lilac, peach, and turquoise, Makinson plays with opacity and superimposition to heighten this disorienting lack of depth, camouflaging the figures so they appear to almost merge with the shifting terrain. The relationships among the figures Makinson depicts are similarly ambiguous: some kiss and caress, or exchange longing glances; others look suspicious or hostile. In My Fins are Sleeping, a rat clutches the shoulders of a woman as she pulls out the entrails of a floating body. Another work, Magma Rising, features a woman with catlike ears running through the landscape, as if she is trying to escape the human-headed serpent conjoined to her body.

Smaller paintings like the contemplative What A Wild Baby and the sensual diptych Crunchy Darlings are cropped tightly around individual figures or pairs, offering a more intimate view of the lush synergy between the creatures and the scenery. The former is a portrait of a nymphlike woman with a meditative expression resting on a tree, her body adopting the qualities of its surroundings: Makinson renders her polychrome skin in the exact same combination of shades as the surrounding rocks and plants. In the diptych, an olive green humanoid with gills for ears crouches in the right panel, as if hiding from view, while its tail—bearing a long-haired head attached to its tip—invades the panel on the left, circling around a headless dark green torso. Makinson weaves a sprawling world in these works: an alternate reality with redrawn boundaries, rife with re-realizations of desire, identity, and possibility.