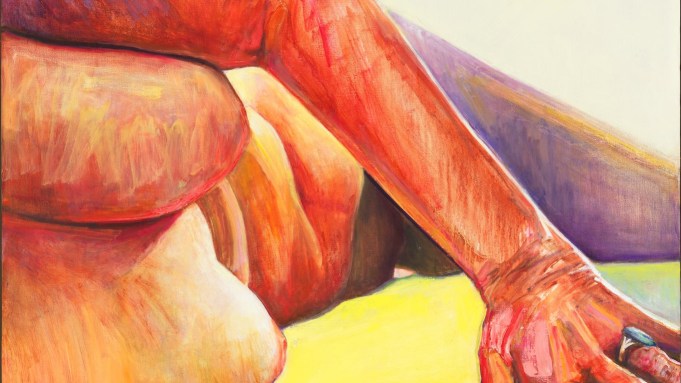 While first-wave feminist artists were experimenting with video, installation, and other new media, Joan Semmel—along with Sylvia Sleigh, Betty Tompkins, and a few others—stuck to painting. Semmel found in this so-called dead medium a strategy that got to the heart of the feminist mission: she painted her own naked body from her point of view, depicting her breasts, belly, and limbs as she saw them when looking down. As the title suggests, Semmel’s painting Revisiting (2018) harks back to her signature self-portraits of the 1970s. Rendered in contrasting hot pinks and cool, pale blues, the work pairs energetic markings on the torso with smooth, opalescent surfaces on the abdomen and legs. The work was among the first that one encountered in her latest solo show at Alexander Gray, and it served as both a reminder of her contribution to history and an affirmation that age has not diminished her vitality.

By painting her body almost like a topography, Semmel makes manifest the feminist dictum “Your body is a battleground” while challenging the conventional relationship between space and figure in Western art. This spirit of confrontation lives on in Crossed Arms (2018), in which we see Semmel folding her arms across her chest, as if to protect herself. Like most of the nine paintings in the exhibition, this work shows the front of her body from a short distance, rather than from her own perspective, and is larger than life, with a cropped figure on a canvas six feet tall. Her body is rendered in warm orange and yellow tones, while the background features passages of seafoam green and white. The left side of her body is traced with a bright blue line that lends an almost graphic quality to the figure. Semmel depicts the effects of aging unapologetically. On occasion, these “imperfections” take on metaphorical significance. For instance, the crumpled, crepey folds of skin between her scapulae in Seated in Red (2018) look like scars, as if the figure were a fallen angel who lost her wings.

For decades, critics and art historians have celebrated Semmel’s fearlessness in portraying the aging female body. Today, at eighty-six, she continues to paint this body, recapitulating the postures, poses, and compositional strategies that she has used for decades. Consequently, the sense of discovery and bravery that once lent her work pathos has dimmed. I find myself wondering if Semmel’s current work is still radical, or if it simply reminds me of a time when it was. Can an artist maintain her edge without pushing her medium or subject matter further? Yet, importantly, Semmel has paved the way for a younger generation of painters, including Clarity Haynes and Jordan Casteel. Her example helps give people permission to represent themselves and their communities on the canvas when historical conventions may not.