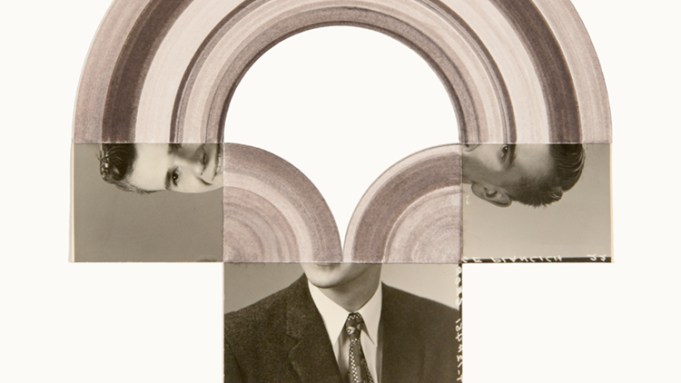 Joe Rudko’s formally exquisite collages broach heady conceptual questions about perception and representation. Among the works on view at Greg Kucera gallery (all 2018) was Timeline, in which roughly torn strips of color photographs are arranged in a grid set in a shadow box frame whose interior is lined with mirrors that make the grid appear to extend indefinitely. The strips focus on vertical and horizontal elements from the original photographs, so that the resultant grid shows utility poles, palm trees, and window frames intersecting with handrails, horizon lines, and reflections on the placid waters of Puget Sound. The strictly organized composition evokes the patterns and constraints that structure our experiences of the world.

In works that incorporate portraits, Rudko extends his formal and perceptual experimentation to examine the construction of white masculinity. Authority Figure comprises tiny equal-size squares cut from twenty-five black-and-white headshots of police officers from Arcata, California, taken during the 1950s. Rudko combined the squares by hand to create a composite image that resembles a pixelated image of a single police officer. All the officers in the source images are white men—a fact that whispers volumes about the racialized dynamics of policing. In the 1860s, Humboldt Bay, where Arcata sits, was the site of a series of brutal massacres of Indigenous people, and in 1886 the city officially expelled its Chinese population. The smiles of white policemen visible in some of the squares appear sinister in light of this violent history. But rather than suggesting strength in numbers, Rudko’s treatment introduces a destabilizing permeability to the collection of images, undercutting the authority the individual photographs may have once projected.

Role Model is another composite made of multiple portraits (the artist calls these works “diffusions,” a reference to his technique for atomizing source images and dispersing their parts). Rudko used vintage portraits of eight women and eight men from the archive of American Stock Photography, Inc., one of the oldest stock photography agencies in the United States. The men are photographed from low angles, staged to look strong and commanding, while the women assume vulnerable, demure poses. Rudko’s piece grapples with similar themes as Barbara Kruger’s and Richard Prince’s appropriations of advertising photographs from the 1980s. By assembling these fragments into one large image, Rudko simultaneously aggregates and obscures their content, leaving the work’s critique open-ended. Role Model also felt topical, as it was on view during a month when a Gillette commercial criticizing “toxic masculinity” renewed mainstream interest in the history of gendered marketing.

Other images in the exhibition cut to the tensions at the heart of white male identity. Puzzle Box is a visual pun: a portrait of a white man sliced in half diagonally, its two parts offset a few inches. The overall composition conjures a decorative box with an arcane opening mechanism. Mushroom Cloud is a photograph of a man whose head has been sliced in half vertically and opened like a Pandora’s Box, exploding into a mushroom cloud rendered with photographic retouching pens that replicate the tonality of the original photo. The cartoonish paroxysm hints at a narrative link between this image and Puzzle Box. How many men in our culture choose to remain closed and inscrutable out of fear of what may be unleashed if they were to open up? The lightheartedness of the images and titles makes a pointed question like this feel accessible. By dissecting, expanding, and transforming these portraits, Rudko reveals white masculinity to be, above all, a malleable facade, loaded with potential for reconfiguration.

Christian Louboutin to Be Honored by World Monuments Fund