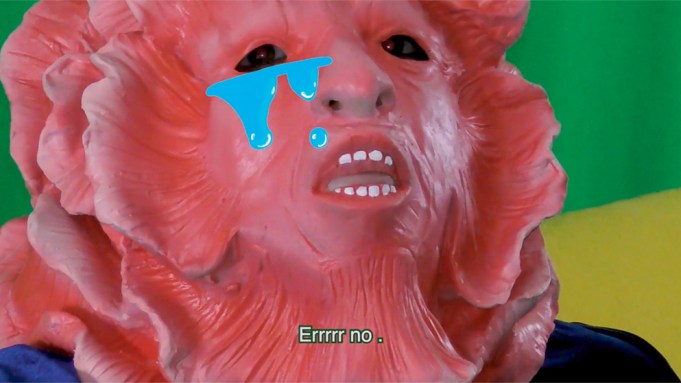 British artist John Russell’s recent exhibition at Bridget Donahue, “DOGGO,” was stylistically inconsistent, conceptually capacious, and insouciant in tone. Somehow, it all worked. Much of the gallery glowed green from the fluorescent backlighting of an 8-by-27-foot vinyl-printed digital rendering of a leafy forest landscape, the lushness of nature here confined to a swath of artificial imagery. Beyond this, another digital print depicted a highway overlaid with the neon pink face of a hybrid rose-person—a character in the exhibition’s central work, the video DOGGO (2017–18), which combines theory and comedy to envision a weird possible future. The video’s characters are generally humanlike figures with some very nonhuman features. The two protagonists are Doggo, who has the head of a pug and tentacles for fingers, and Insect, who has a fly’s head. They work together as a sort of detective duo.

Russell’s previous show at the gallery, “SQRRL” (2015–16), likewise portrayed an absurd imagined future in which nature seemed to have been transformed by techno-scientific developments. It also featured a backlit mural and a video. But “DOGGO” was stranger and more expansive than its predecessor, offering such stylistic variety that it almost resembled a group show. The other works on view included Fly (2018), a photo of a two-headed fly displayed in a thick frame resembling fatty flesh, and two quite different oil paintings: Praying Mantis (2018), a dark-hued, realistic image of a praying mantis, and Woman (2018), a bright, colorful picture of its subject surrounded by expressive swirls. Sculptures of Doggo’s and Insect’s heads, meanwhile, resembled drugstore Halloween masks.

The video provided yet another stylistic approach, one that might be called speculative vérité. In straightforward, casually framed shots, DOGGO follows Doggo and Insect through a nondescript English city and the adjacent countryside, the footage intermittently overlaid with digital renderings of a glowing futurist building or an animated butterfly. The year: sometime in the late 3100s. We watch Doggo brush their teeth (the various characters are often referred to by the pronoun “they,” though the world depicted is too post-post-post- for any consistent form of address) and visit a sick, deer-headed friend before embarking with Insect on the video’s main event: the pair’s search for an “old man” named Prysym Lee who has escaped from a senior living facility known as an “age center.” With deadpan humor, Russell portrays a society in which the advanced surveillance-state apparatus that has assigned the partners to track down Prysym coexists with the haphazard analogue means by which they attempt to do so.

Doggo and Insect encounter a number of other post-humans along the way. The characters exchange what seems to be a catch-all greeting: “joy” or “joys.” They call each other “comrade,” and their comments—even the bleak, unfunny ones—are frequently punctuated by laughter. It appears we have entered a positive-vibes-only neoliberal hellscape. In a scene set in a generic-looking coffee shop, Doggo pages through Prysym’s files as Insect gruffly drones on about “pure immanence.” This is a banal dystopia, one Deleuze might have predicted but couldn’t prevent. With the video’s mix of composite bodies, and the show’s vast array of artistic modes, Russell offered a campy send-up of posthumanism and its empty promises of a liberatory future achieved through infinite difference.