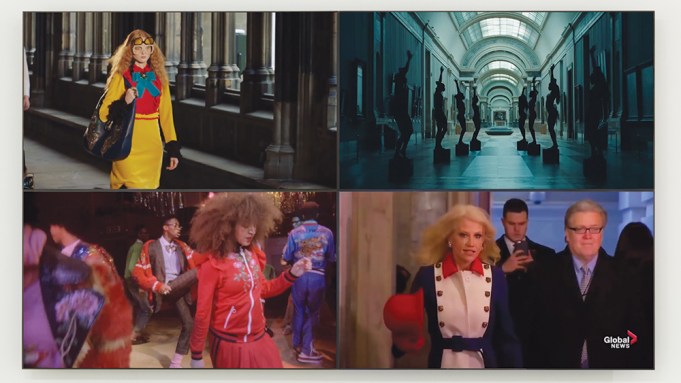 The title of Jonathan Horowitz’s show at Sadie Coles, “Pre-Fall ’17,” alluded simultaneously to the language of fashion marketing and to Harvey Weinstein’s downfall after dozens of women publicly accused him of sexual abuse in October 2017. Horowitz, who was trained in philosophy, often uses witty juxtapositions of appropriated imagery to emphasize the mutual interdependence of politics, entertainment, and consumerism. The works in this exhibition (all 2019) highlighted the similarities between the branding of commodities and of political ideologies, implying an insidious, even criminal, coziness.

The show’s highlight was the video Transfer of Power (Gucci Soul), a grid of four simultaneous clips that have Gucci as a common denominator. In one, presidential adviser Kellyanne Conway sports a military-style Gucci coat at Donald Trump’s inauguration; another shows the fashion show where Conway’s coat debuted, which took place at London’s Westminster Abbey—the site of royal coronations for nearly a millennium—and featured almost all white models. A third clip is from Gucci’s pre-fall ’17 campaign video, which was inspired by American and British soul movements of the 1960s and cast with only black models, and the final sequence is from Beyoncé and Jay-Z’s 2018 music video for “Apeshit,” in which the couple poses like contemporary royalty among masterpieces in the Louvre, wearing various designer outfits, including clothing by Gucci. Seen together, the clips make clear that the desire to project status through luxury brands cuts across political lines—and a corporation like Gucci is happy to accept publicity from right-wing politicians and black pop stars alike.

Exhibited in the same room, Power comprises six vinyl–on–PVC board cutouts depicting iPhone versions of the raised-fist emoji in the spectrum of skin tones offered, from yellow to dark brown. Though Apple’s introduction of multiple emoji skin tones ostensibly represents the company’s commitment to diversity, the menu compels users to select a particular skin color, inadvertently reinforcing racial division. The work highlights the shallowness with which corporations tend to engage with identity politics, but it is something of a one-liner.

Coke/Pepsi Diptych (2016 containers) is a pair of large digital prints depicting multiple rows of soft-drink bottles. Hung on opposite walls, the prints appeared identical at first glance; however, one depicts beverages manufactured by Coke and the other by Pepsi, the juxtaposition illustrating the lack of real choice behind the appearance of brand variety. The diptych is part of Horowitz’s ongoing body of work about the “rivalry” between the two conglomerates, which he treats as a metaphor for the United States political system: two dominant parties peddling products that often differ mostly in their packaging. As with Power, this work alludes to an interesting idea but is rather simplistic and fails to hold the viewer’s attention.

The final room was devoted to a video titled Hollywood Story V. XXV. MMXVIII, the Roman numerals in which represent May 25, 2018, the date of Weinstein’s arrest. The video features a rolling list of the names of the movie mogul’s eighty-seven female accusers in elegant script on a satin backdrop, aping the title sequence of Douglas Sirk’s 1954 film Magnificent Obsession, from which the schmaltzy soundtrack is also borrowed. The invocation of Magnificent Obsession drives home the point that Hollywood has long sacrificed ethics for profit: Rock Hudson, the star of the film, in his first leading role, was forced to conceal his homosexuality over the course of his career to preserve his image as a romantic hero, given that persona’s lucrativeness for the movie studios that employed him.

Throughout the show, Horowitz addressed important issues about the double standards, hypocrisy, and abuse of power in society, pointing to the role of branding, whether political or corporate, in manipulating consumers. However, appropriating the visual lexicon of advertising, fashion, and cinema comes with its own risks: Horowitz’s approach can sometimes feel as glib and superficial as those he critiques.