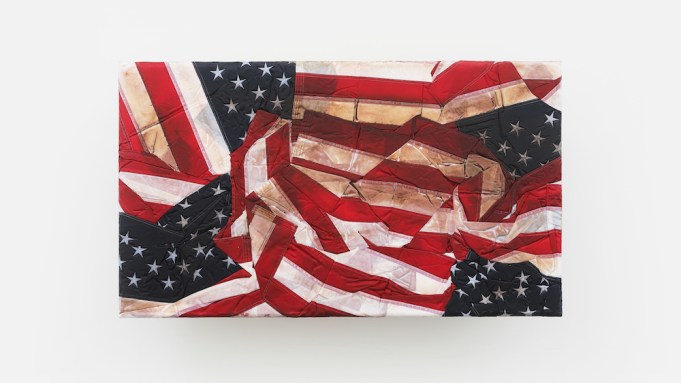 Zoom is generally no way to view art, but for Josh Kline’s exhibition “Alternative Facts,” at Various Small Fires in Seoul, it was oddly fitting. I saw the show with a dozen other writers during a Zoom walk-through given by the gallery’s director. Through our screens, we viewed six new sculptures (all 2020) that themselves related to screens: American or Blue Lives Matter flags that had been soaked in resin, cast in the shape of flat-screen televisions, and mounted on the walls. There were surely details that the compressed video stream left behind, such as the nature of the stains dirtying some of the nylon fabric. But the message of this exhibition featuring TVs made out of twisted flags and titled after Kellyanne Conway’s infamous characterization of her lies came through just fine: conservative media in the United States has become inextricable from right-wing agendas that are deforming American society.

Kline’s sculptures critique the values of a country that conflates freedom and property ownership, that prioritizes the ability to have your own version of the truth delivered to you on an imported television that you bought at half-price on Black Friday. (For his casts, Kline used televisions made by Korea’s Samsung and LG, the most popular TV brands in the United States.) The Stars and Stripes sculptures belonged to a series whose title, like the exhibition’s, is an oxymoron borrowed from the contemporary public sphere: “Reality Television.” The single work incorporating Blue Lives Matter flags—a variant on the American flag that is meant to honor the police and that insults the Black Lives Matter movement—was from a series called “Fox and Friends,” after the daily morning show on the nation’s preferred network for mainlining right-wing propaganda into the eyeballs.

Kline’s works inevitably bring to mind Jasper Johns’s flags. In Reality Television 16, the stars and bars of a flag press through passages of off-white pigment, the piece recalling Johns’s White Flag (1955). But the art historical evocation doesn’t complicate these works in any real way. In the end, Kline’s sculptures are not about subtlety: they adopt the same blunt, propagandistic tone as the culture they critique. Indeed, the gallery director noted that the pigment in the above-mentioned piece was meant to represent not Johns’s encaustic but the skin color of Fox’s primary viewership. This formal invocation of whiteness seems gratuitous, since the flag itself represents a country built on white values. While the work’s low intellectual register seems intended as a jab at its right-wing subject, giving exhibition viewers a jolt of superiority, it also allows Kline to avoid offering any specific critique of our country’s racist history.

This was a quick, brutal exhibition—made of screens, by screens, and for screens. Like Johns’s flags, Kline’s “Reality Television” and “Fox and Friends” works at once depict flags and are flags. Similarly, they both portray screens and are screens, lampoon propaganda and are propaganda. The sculptures are compact metaphors for the sort of histrionic arguments conservative pundits favor. And as with a Fox broadcast or a Trump speech, you don’t need to read between their lines. They say the nasty parts out loud.