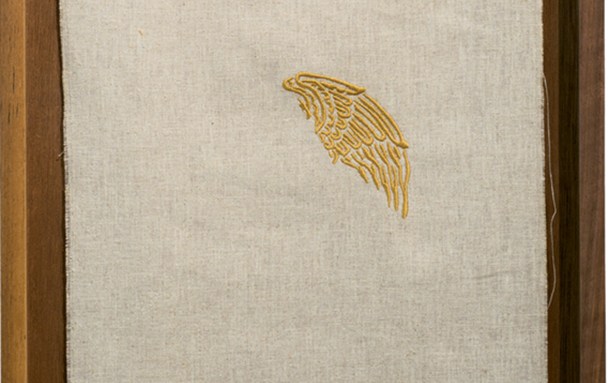 A world without States—those homogenizing political authorities that impose borders and preclude any real self-determination for the individual peoples existing within their legislative purview—appears today as little more than a remote political possibility, but for Mexican artist Juan Caloca it is the only choice. His work challenges nationalism in a country where violence is waged daily by the State as much as by criminal and corporate agents. Last year, the Mexican State passed a security bill that effectively entrusts the military with the preventive and investigative responsibilities of the police (allowing them, for instance, to act against social protests they deem not peaceful enough) and diminishing their transparency and accountability. Such constant state repression has led the thirty-three-year-old Caloca to develop a practice critical of national symbols, which sometimes seem to be considered more sacred and worthy of protection than the lives of citizens.

In his work, Caloca often pointedly disregards the law, passed in 1984, prohibiting people from modifying or misusing Mexico’s flag, coat of arms, or anthem. His exhibition at Parque Galería centered on two series that deconstruct the coat of arms. The insignia is a representation of the legend behind the 1325 founding of Tenochtitlan, in the center of today’s Mexico City. As the story goes, Huitzilopochtli—the god of the sun, war, and human sacrifice in the religion of the Indigenous Mexica people—told his devotees to settle down at the place where they encountered an eagle devouring a snake atop a prickly pear cactus. Two branches of oak and laurel were added to the bottom of this image as the seal became more official in the years after the War of Independence (1810–21). One of the exhibition’s two series, “Big Bang” (2018), explodes the layered crest into tiny pieces—little laurel and oak leaves isolated from their branches, three prickly pear fruits, an eagle’s head, and a single wing—which have been embroidered on poster-size linen sheets in golden thread.

The other series, “Change of State” (2018), which gave the show its title, comprises twelve small-scale monochrome paintings in different shades of ocher, yellow, red, and green. They hung around the room, their uneven textures soon revealing themselves. The works were made not with ordinary paint but with pigments concocted from elements represented in the coat of arms: eagle blood, Lake Texcoco water, laurel tree bark, snake bones, obsidian. The transformation of these things into materials for monochromes mirrors the transmutation of the national emblem—which is meant to symbolize the unity of all civilians within the territory—into an assortment of vacant signifiers in “Big Bang.”

The two series show that Caloca is at his strongest when he pulls away from the more literal articulations seen in his previous works, like a Mexican flag drenched in oil or a United States flag with Twitter logos instead of stars, and in other pieces on view in this exhibition, such as Chronicle of the Destructions: in Nemiuhyantiliztlatollotl (2018), a makeshift altar comprising the taxidermy heads of an eagle and a snake. Overall, the exhibition was a strong denunciation of Mexican nationalism, echoing Mixe activist Yásnaya Elena Aguilar Gil’s radical directive that we stop loving Mexico, because States are simply not meant to be loved.