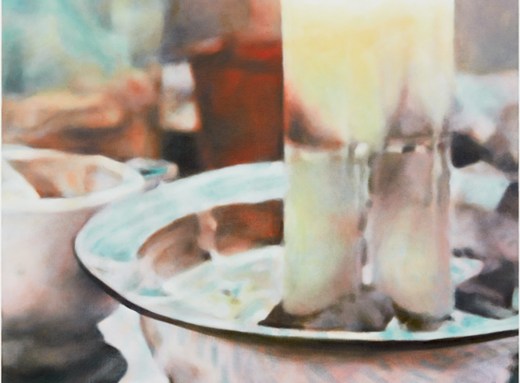 The nine oil paintings in Judith Eisler’s first New York show in a decade (all 2017 or 2018) take their imagery full circle, in a sense: they portray shots from director Derek Jarman’s film Caravaggio (1986), whose own style is meant to conjure, in celluloid, the Italian master’s early seventeenth-century oil paintings. One looks in vain, however, for evocations of Michelangelo Caravaggio’s stark tenebrism, so integral to Jarman’s film, with its clusters of bodies in spare sets and raking light. Ever since she began exhibiting in the mid-1990s, Eisler, who splits her time between Connecticut and Vienna, has based her work on photographs she takes of paused scenes in movies—the vast majority of the time focusing on close-ups. Here, that close-up focus has allowed her to unearth moments filled with a diffuse light and vivid colors that stand in contrast to her source film’s general aesthetic.

With Magdalena (2018), Eisler approximates most closely Jarman’s restaging of Caravaggio’s Baroque effects. A young Tilda Swinton poses as the repentant Magdalene; light glints off her right cheek and cascade of hair, while her near shoulder dissolves into shadow. For the most part, however, Eisler remains preoccupied with other motifs and effects. Take, for example, Candles (2018), whose subject is as fundamentally Caravaggian as imaginable—if not in terms of the master’s own work, then by way of his legion of European followers, including Gerard van Honthorst (whose take on Caravaggio’s Supper at Emmaus places a gleaming candle at its center) and Georges de La Tour. But Eisler’s image appears suffused by yellow, teal, and pink pastels rather than providing a dramatic juxtaposition of shadowy background and illumined foreground.

“The black night invading. The soot from the candles darkening the varnish . . . ”  Thus, by means of a voice-over in the film, Jarman evokes Caravaggio’s studio practice. Creating glowing, prismatic compositions, Eisler dispels such dimness (and grimness) in a couple works titled Palette and a couple titled Paintbrush. These four paintings plunge us into the stuff of Caravaggio’s oils, which are shown still aswirl on his palette or newly drying on a section of canvas. The imagery has a glittering and gleaming quality that recalls something of James Rosenquist’s paintings. On full display in the two “Palettes” is her knack for large-scale works suspended between figuration and abstraction, with passages of pure paint congealing into objects and surfaces only from afar.

The show was titled “Riffs.” And what is postmodernist painting but a series of riffs, variations, and pastiches? This is by no means to pigeonhole Eisler’s work, the sensuousness of which is arresting in its own right. Yet the paintings are clearly part of a genealogy that includes the experiments of Pictures Generation artists like Troy Brauntuch, who similarly reproduces imagery from photographic and filmic sources, performing the “quotation” and “excerptation” that Douglas Crimp described in his pivotal October essay analyzing such work. If the higher mathematics of Eisler’s quotations here imparts a further degree of remove to her images, the paintings nevertheless stand up on their own visual terms. Anything but weighed down by their circuitry of citation, they bear a refreshing grace and buoyancy.

The Best Blenders for All Your Crushing, Grinding, Pulsing and Puréeing Needs